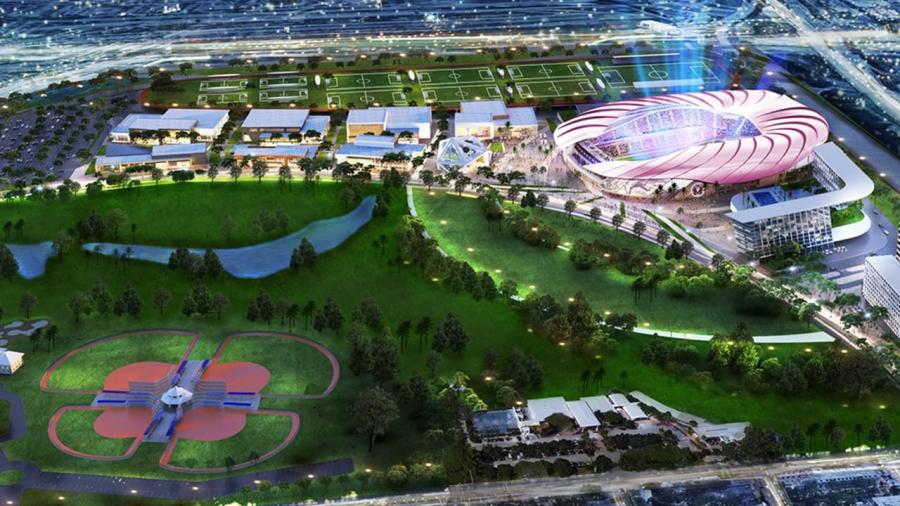 The partnership wants the stadium ready for its first game by May 2025. (MLS Soccer photo)

Former soccer superstar David Beckham's plans for a south Florida stadium cleared its biggest political hurdle April 28, but more votes and regulatory approvals await before the mogul and his partners can start construction on the 73-acre site near Miami International Airport (MIA).

With approval of the 99-year lease of the city's Melreese golf course property, the Inter Miami owners have control of the public land they want to transform into the soccer stadium and a commercial complex, with an adjoining park.

The Miami Herald reported, though, that the partnership, led by local corporate executives Jorge and José Mas, still must secure city zoning approval and permission from local aviation authorities to construct a stadium so close to MIA's runways.

Miami-Dade County owns MIA, and airport administrators told the Herald that the Beckham group agreed to height reductions of the stadium design that complies with county regulations. In an April 20 memo, José Ramos, Miami-Dade's director of aviation planning, said the stadium's 120-ft. height limit conformed to county safety code for land around the airport and that the Federal Aviation Administration has cleared the project.

But that was before city commissioners modified the proposed lease deal to include a requirement that the soccer group meet with leaders of the University of Miami to pursue expanding the stadium to also accommodate UM football games, according to the newspaper. That would mean adding 15,000 seats to the planned 25,000-seat stadium, but new plans have not yet been presented to show how a larger venue would change heights in areas that MIA flagged as concerns.

Miami Mayor Francis Suarez said April 29 that any height conflicts will get addressed during a zoning process where county and city officials will make final recommendations on whether the soccer group's construction plans follow local rules on building and development. Miami commissioners would vote again on zoning approvals for the site.

"We're going into the zoning phase. This is the point where we talk about these things," said Suarez, who helped secure support for the 4 to 1 vote approving the no-bid lease.

With the group already pursuing zoning changes needed for construction, Suarez noted that he expects final approvals to be secured within a few months and well before the end of this year.

The partnership wants the stadium ready for its first game by May 2025, he explained.

Superstar Has Eyed Miami as a Stadium Site for Years

Beckham has been pursuing a stadium deal in Miami-Dade since 2013 — a quest complicated by the partnership's abandoning of a stadium plan in Miami's Overtown for the Melreese site once the Mas brothers joined the venture in 2017.

The English-born ex-footballer did not attend the commission meeting, but Suarez reached Beckham by phone later.

"He was ecstatic," the mayor said. "I thanked him for staying committed to the city."

The group had successfully lobbied Miami leaders in 2018 to hold a referendum on the stadium negotiations for building the Miami Freedom Park and Soccer Village. It passed, giving the city permission to negotiate the exclusive lease on the golf course that sits on parkland off FL Highway 836.

The Miami agreement also gives them permission to build a shopping center, office complex and 750-room hotel on land that was not open to bids from other real estate developers. The new terms of the lease require the soccer group to pay Miami a small percentage of the gross revenue from the land, with a minimum payment of about $4 million a year.

Beckham's partnership agreed to convert 58 acres of the Melreese site into a park and pay $25 million for Miami to create new parkland and public spaces elsewhere in the city.

Ken Russell, a Miami Board of Commissioner member, and a Democratic U.S. senate candidate who voted for the deal, said a part of the money will be added to the budget needed to transform a former landfill on Virginia Key into 160 acres of new playing fields. The money will not be enough to fund the project, but will pay for design work, he said.