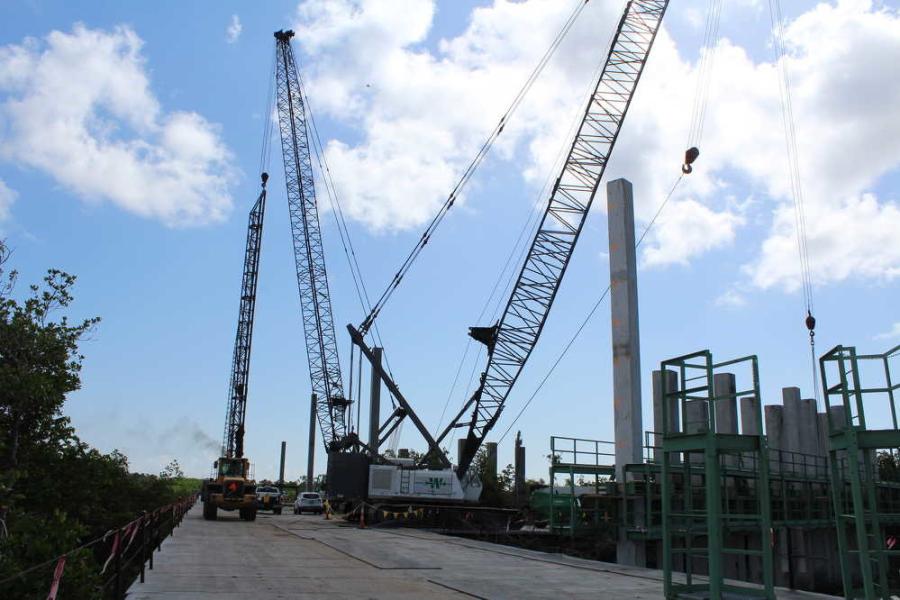 The six-lane Parkway is replacing what was a two-lane road known as West Virginia Drive through the largely residential area.

Florida is famous for its rapid population growth as more and more people have chosen to leave the colder, northern states for the warmer climes of the Sunshine State.

Miami, Jacksonville, Orlando and Tampa have all become major cities due to that growth, but many other lower-profile municipalities have also experienced such a large influx of new residents that their infrastructure has become overloaded.

That is particularly true on the east and west coasts, to be expected, but the growth of Port St. Lucie is astonishing.

A once-quiet village located between Miami/Fort Lauderdale and Cape Canaveral just inland from the Atlantic Ocean, Port St. Lucie had 330 residents in 1970. Just 10 years later, it had over 14,000 residents, a more than 4,300 percent increase.

Today, the estimated population is a more than 185,000 people.

Needless to say, the city of Port St. Lucie has scrambled to update its roads, bridges and other infrastructure to keep its residents moving around more efficiently and ease the high-traffic and congestion.

In addition, the city wants to improve road access for tourists looking to soak up the sun on the beaches of Hutchinson Island, just to the east of town across the Indian River.

With that in mind, the city has begun construction of the Crosstown Parkway Extension, an $87 million project. The initiative includes the completion of the east-west Crosstown Parkway and a 4,100-ft.-long bridge across the North Fork of the St. Lucie River that will connect Manth Lane with U.S. Highway 1 at Village Green Drive.

When it is finished in late 2019, the nearly two-mile-long multi-modal project will be the final piece in the Parkway between Interstate 95, several miles to the west, and U.S. 1 to the east. Both are major north-south roadways and have long been important Florida travel arteries.

With Port St. Lucie and Prima Vista boulevards being the city's only other existing crossings of the river and traffic being so heavy along those roadways, the need for the Crosstown Parkway, or something similar, was recognized as far back as 1980.

“These other east-west routes have been widened to the point where they cannot be widened anymore,” admitted George Denti, project administrator of Construction Engineering Inspection (CEI), the team working to coordinate the Parkway for the city. “Their capacities are failing and, as a matter of fact, this project has been needed for many years.”

Denti and his team are working with two nationally-recognized companies to design-build the Crosstown Parkway Extension: Archer Western, the prime contractor, and Reynolds Smith & Hills (RS&H), a nationwide engineering firm with offices across Florida.

Florida-based Ranger Construction, with a location next door in Fort Pierce, is handling the roadway, while Felix Construction in nearby Stuart, Fla., is working on the underground utilities.

Right now, traffic along the six-lane Parkway from the west dead-ends at Manth Lane.

“We had a significant permit delay of over 15 months,” he said. “There were environment challenges to the permitting because we are building over wetlands. But since this is a design-build project, we were able to proceed with the design and some material procurement and we just waited until the permit challenges were worked out.”

So far, the west side of the project, between Manth Lane and the river, has seen the water, sewer and drainage installation completed and crews have begun the needed grading on that side, as well as the excavation for retention ponds, Denti said.

The six-lane Parkway is replacing what was a two-lane road known as West Virginia Drive through the largely residential area.

Denti said it was the only crossroad that had to remain open during construction.

“That is a fairly-significant north-south route, so we wanted to get it reconstructed during the summer prior to school starting,” he said. “We used marked detours to divert vehicles around the work and it went smoothly because the volume during the summer through there is relatively light.”

That roadwork is turning Floresta into a “superstreet,” Denti added.

Also known as a restricted crossing U-turn, or RCUT, a superstreet utilizes designated U-turn lanes in the median of major highways. They are more affordable than limited-access freeways with interchanges and improve traffic flows on major roads.

Floresta Drive is Florida's first superstreet, he said, although they are found in other parts of the nation, including several in North Carolina.

The Parkway also will sport a raised landscaped median and feature a pair of 6-ft. berms on the perimeters to create a buffer between the west side's residential neighborhoods and the roadway itself.

Dedicated bicycle lanes along the length of the Parkway and pedestrian pathways west of Floresta Drive are among the other features of the design.

Across the water on the east side, the area is made up of a marshy wilderness preserve almost all the way east to U.S. 1.

Denti said in August that only a small amount of clearing had yet to be done on the east side, but when work picks up there later in the year, another six lanes will be constructed with several dual right- and left-turn lanes.

“It will be a pretty wide intersection because we expect a significant amount of turn movements,” he said.

A Parallel Trestle to Erect the Bridge

The jewel of the project, though, is the bridge over the river.

The simple, yet elegant design of the Crosstown Parkway promises to be a beautiful and minimally-invasive addition to the wetlands it will cross, according to Denti.

“This will be a postcard for Port St. Lucie — an identifier,” he said. “We want to make that identifier aesthetically pleasing, as well as strong and robust.”

To accomplish that, the Parkway bridge will be built using a temporary trestle alongside of it. This utility span is a 35-ft.-wide, 6-ft.-high steel bridge that will transport and hold all the equipment and materials to build the permanent bridge adjacent to it.

Currently, Denti said that about 1,000 ft. of the trestle has been erected.

So that it can support the weight of 300-ton cranes and 100-ton bridge beams, the trestle is held up by 30-in. steel pipe pile-driven into the riverbed, with steel girders placed over them and decking made of precast concrete mats.

“In fact, the capacity of the trestle is greater than that of the finished bridge,” Denti said.

“We used a trestle on our last project, the Indian Street bridge in Martin County, but the reason it's done is that it's generally an environmental-permit requirement,” he said. “Because they don't want us moving around with this heavy equipment and materials in the wetlands, these trestles give us an elevated platform from which to construct the bridge. Then, when we are complete, we just pluck it out behind us.”

The plan calls for the trestle and bridge work to extend out onto the main channel of the North Fork of the St. Lucie River from the west, before dismantling the trestle, moving it over to the east side and finishing the rest of the bridge from that side.

The reason for that is simple, Denti said.

“They don't have 4,100 feet of trestle material,” he explained with a wry grin.

On hand to do the heavy work are some Manitowoc 888 and 999 crawler cranes – behemoths designed for lifting the heavy loads it takes to build a bridge.

Denti said there are a multitude of other machines on site, most of which are owned by the construction companies brought in for the project. Besides the hydraulic cranes, he identified dozers, loaders and off-road trucks on the scene, with the earthmoving equipment all doing their precise grades via GPS.

“There are also plenty of rental pieces here to fill in the gaps, such as pumps, generators, man-lifts, etc.,” he said. “Places like United Rentals and Sunbelt Rentals are nearby and are great for getting things short-term because they are always affordable and pickup and delivery is easier.”

Job Site Stood Up to Storm

In anticipation of Hurricane Irma, the project's storm plan was initiated, according to Beth Szoka, public information officer for the Parkway initiative. The storm barreled through the area, but she said Port St. Lucie avoided the worst of it.

“All the cranes and equipment were secured and the work site was battened down,” she reported on Sept. 15. “This area was very lucky in that we did not have the damage that they had in the Keys, Miami, Naples and Jacksonville. In the end, we only had minor cleanup that had to be done and we were able to get right back to work.”