While Bellamy's current project is relatively stress free, others have had their share of obstacles. 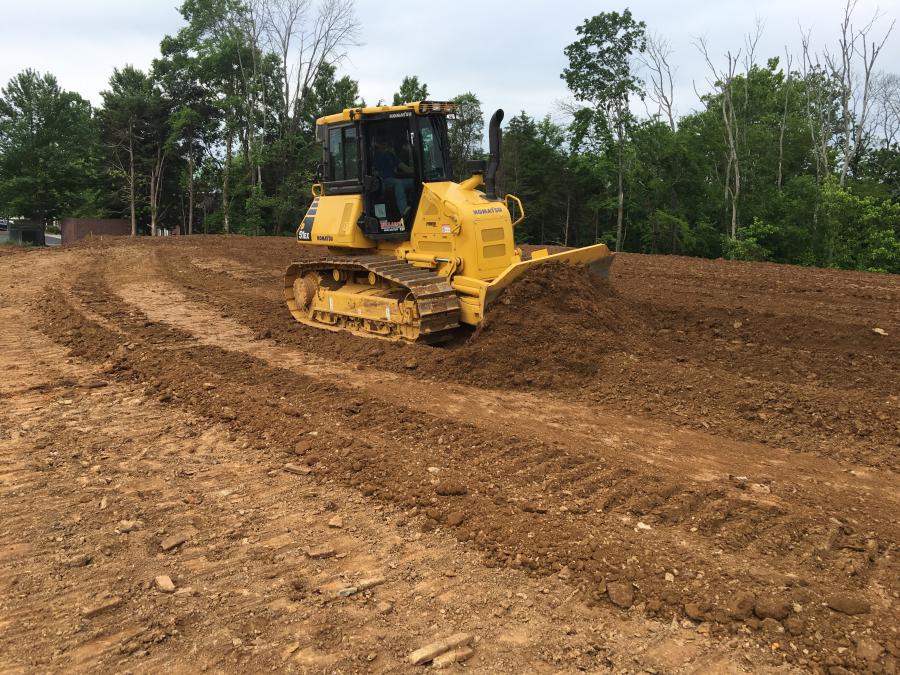 The Komatsu D51 EX dozer is being used on a variety of projects.

James Bellamy got started in the business in the late 90s when he got a job selling asphalt in Crab Orchard, Tenn. A position at Tennessee Asphalt Company's grading division followed in 2000, and by 2005 he was starting his own business: Bellamy Excavating.

Bellamy, who has a civil engineering and surveying background, preferred the maintenance side of the field over the design side. Starting his own business was always "in the back of his mind," he said, but the driving force to move forward came from an afternoon riding four-wheelers with a friend.

"I happened to sell a couple jobs while we were out riding four-wheelers and we started joking about 'I wish I'd invest in you and just live off you for the rest of my life' or something of that nature."

The next day that friend proposed the idea of Bellamy doing a business plan with him as a partner. Kirk and Louis Schaad are both 25 percent owners of the business; Bellamy is the majority owner at 50 percent.

"We try to do medium-sized construction, basically in and out to get done in two, three or four weeks and then move on to the next one," Bellamy said.

"When I was at Tennessee Asphalt Company, I was trained by a gentleman named David Ammons who had his own construction company here in Knoxville for years. Bill Ratliff, who was the president of Tennessee Asphalt Company, hired him to come in and teach me how to estimate grade work. One thing that he kept telling me is if you stay in this medium-sized area you won't have to worry about having a beast that is too much to feed. And, so, I have always tried to follow that advice, and I still try to stay in that medium-sized area whereas I don't have a beast that I can't control."

Bellamy first worked with Power Equipment when he was employed at Tennessee Asphalt Company. He remembered the relationship when he started his own company.

"From the beginning, they jumped in and the service they gave to me from the start is the same that they would give to anybody with a bigger size company. If I needed something, they were out there and within an hour if they could not fix it, they would bring another machine out for me while they were working on mine. The down time was very minimal and they treated me with great respect, despite me being a smaller company in the grading business."

All of Bellamy Excavating's equipment is paid for, allowing the company to keep its bills low and move forward even in tough economic times. Its first purchase from Power Equipment was a Komatsu D37 dozer, a Komatsu PC200 excavator and an Ingersoll Rand SD77 sheeps-foot roller. Most recently, Bellamy purchased a new Hamm H11I roller and a Komatsu D51 EX dozer. The dozer is being used to build a pad in Farragut, pushing fill on a 2-acre site for an eye doctor's office.

The import is being dug out with the PC200 and transported to the job site in dump trucks. Once on site, the dozer will push it down for the specified lift and then the Hamm will compact it to specified compaction, Bellamy said.

The Komatsu D51 EX Bellamy Excavating purchased was the very first 2017 D51, according to Bellamy.

"Last year we tried to purchase a D51 dozer and we couldn't purchase the dozer, only smaller sizes. We don't run GPS on our equipment, so the problem we had was the 51 that we could get from Komatsu would only come as an 'I' machine, which was GPS integrated. With us not running GPS integrated equipment, we didn't want to pay the excess cost on that.

"We got the very first one that [Power Equipment] could get their hands on that was not an 'I' machine," Bellamy said.

"The machines work well with hydrostatic drive, so they are real quick. They are very nimble to move around the job. You can get in and out of a tight spot with them and finish right up against the building with them. They just work well with everything."

While Bellamy's current project is relatively stress free, others have had their share of obstacles.

"We often have to work on unsuitable sites, which involve undercut and replacement. I need to make sure to take care of our general contractor during that process because it will be 90 percent of the time a change order."

"We have a soils engineer out there with us to deem whether the soil is good or bad, and then we'll call the general contractor and inform them of the situation. We'll work with them to handle that situation. From there, we'll call in a surveyor, usually a third-party surveyor, who will survey the site from the existing side. Then we'll undercut it and survey it again. We keep everything third party in favor of the owner and general contractor," he said.

Since 1946, Power Equipment (a division of Bramco) has sold, serviced and rented the heavy, general and light construction equipment, products and services in partnership with its suppliers from a base in Tennessee, northern Mississippi, northeast Arkansas and southwest Virginia. The company offers full parts/service/planned maintenance packages and a rental lineup.