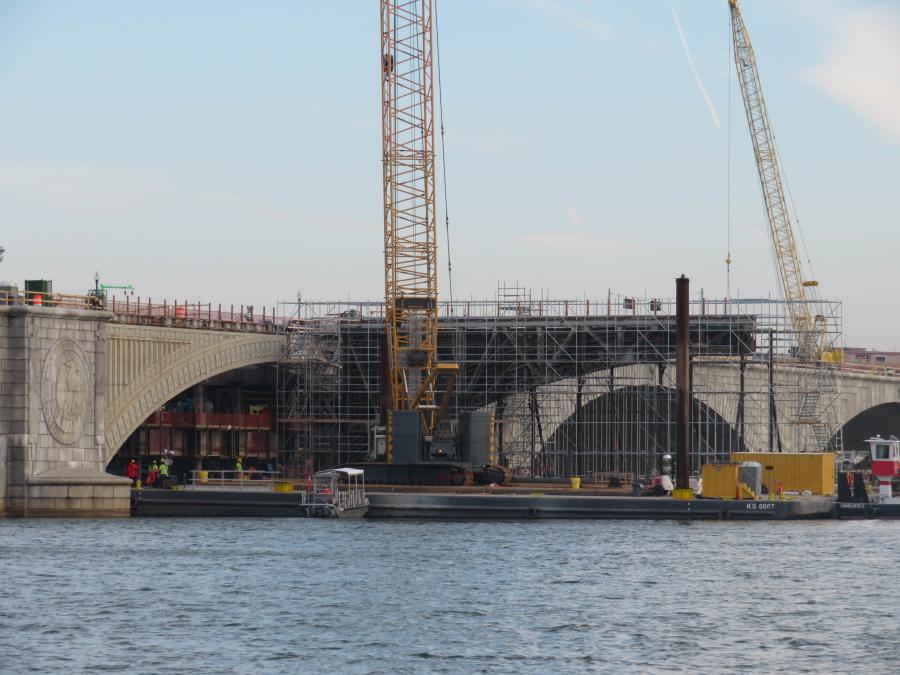 (National Park Service photo) The draw span is being replaced with new, fixed steel girders that will maintain the bridge’s functionality and historic appearance.

As one of the largest transportation projects in National Park Service history, the rehabilitation of Arlington Memorial Bridge will dramatically improve the ceremonial entrance to the nation's capitol. Construction on the $227 million project is currently under way.

"We're working on the bridge so that it will stand for at least another 75 years of service," said Aaron LaRocca, chief of staff of George Washington Memorial Parkway. "If we had not done the work now, Federal Highway Administration engineers determined we might have had to close the bridge to vehicle traffic by 2021."

The National Park Service and Federal Highway Administration will replace the draw span with new, fixed steel girders that will maintain the bridge's functionality and historic appearance. The new structural steel will extend the useful life of the bridge and cut down on maintenance costs.

LaRocca noted that the project didn't happen overnight. For years, temporary repairs were made before the formal rehabilitation project was unveiled.

"The National Park Service has maintained the bridge since the 1930s. Starting in the early 2000s, we began a series of substantial repairs to make sure it would stay open for drivers, cyclists and pedestrians. We began the full rehabilitation of the bridge, the first in its history, in fall 2018."

The National Park Service is working with the Federal Highway Administration to manage the highly anticipated project. LaRocca said it's rewarding to see construction continuing on the historic structure.

"This project is about more than a bridge. An important part of the National Park Service's mission is to preserve our nation's special places for future generations. This rehabilitation project ensures that Arlington Memorial Bridge will continue to serve as a critical link in the region's transportation network, while serving as a monument to the sacrifices of America's veterans."

Starting in mid-March, construction workers began installing precast concrete panels that will support the bridge's new driving surface and sidewalk. Some of the work during this time required the National Park Service to change which travel lanes are open at night. In early March, the National Park Service reduced the number of lanes from 9 p.m. until 5 a.m. through fall 2019.

The new overnight traffic pattern involves workers closing one of the bridge's three open lanes for several hours and temporarily closing an additional lane for about 15 minutes at a time. During the periods when only one travel lane will be open, flaggers will direct traffic. The flaggers will intermittently stop drivers to allow one-way travel in the open lane while workers install a new surface on the bridge.

This change is to allow room for workers to install large, pre-cast, concrete panels. Workers installing the panels need space to drive them on to the bridge and lift them into place by crane.

The work was scheduled at night to minimize impacts to motorists. The bridge's sidewalk will remain open, and the work will not affect pedestrians or bicyclists. Drivers who use the bridge during the day will not see any change to the traffic pattern. Day use will continue as it has since construction began in October 2018, with one lane always open east and one lane always open west with a reversible lane to accommodate rush hour traffic. The next change will be in fall 2019, when officials will shift work to the other side of Arlington Memorial Bridge.

Crews must be mindful of the elements during the ongoing construction. Weather has been a consideration from the beginning.

"A primary consideration in our planning is public and worker safety," said LaRocca. "We postponed work last fall to wait for the Potomac River to drop to a safe level, following large rain storms."

Construction calls for removing sections of the bridge deck, which must be done precisely.

"Removing the bridge deck involves cutting it into manageable pieces, so that we can move it by truck to be recycled off site," said LaRocca.

In December, a contractor finished removing some of the most visible pieces of the bridge from one side. Crews carefully removed, packed and transported the bridge's granite balustrade to an off-site location for comprehensive cleaning and repair.

The structure that supports the balustrade must be replaced, and this is the first time all the stone has been removed in almost nine decades. When the new structure is complete, workers will reinstall the granite balustrade in the same location. Doing so will help maintain the bridge's integrity.

"The granite balustrade contributes to the bridge's monumental appearance," said LaRocca. "It helps tie it to the other monuments on the National Mall, and in Arlington National Cemetery."

As for materials needed during construction, said LaRocca, "We are using precast concrete panels on the bridge deck, and will soon start installing new, steel girders in place of the former drawbridge."

The center span of Arlington Memorial Bridge was once a drawbridge, specifically, a two-leaf bascule span. The bridge allowed large vessels to reach the port at Georgetown. Large ships can no longer access the span because of lower, immovable bridges downriver. Officials have not operated the drawbridge since 1961.

Designed by the architectural firm of McKim, Mead and White, the low, neoclassical bridge is 2,163 ft. long and 60 ft. wide. Except for the bascule span in the bridge's center which is clad in metal, it is constructed from reinforced concrete faced with dressed North Carolina granite ashlar. When it opened, the bridge was the longest, heaviest and fastest opening drawbridge in the world. It currently carries roughly 68,000 cars per day.

Arlington Memorial Bridge has served as a monument to the sacrifices of our nation's military personnel since its dedication in 1932. At almost 90 years old, the National Park Service and Federal Highway Administration are rehabilitating the bridge in order to provide service for decades to come.