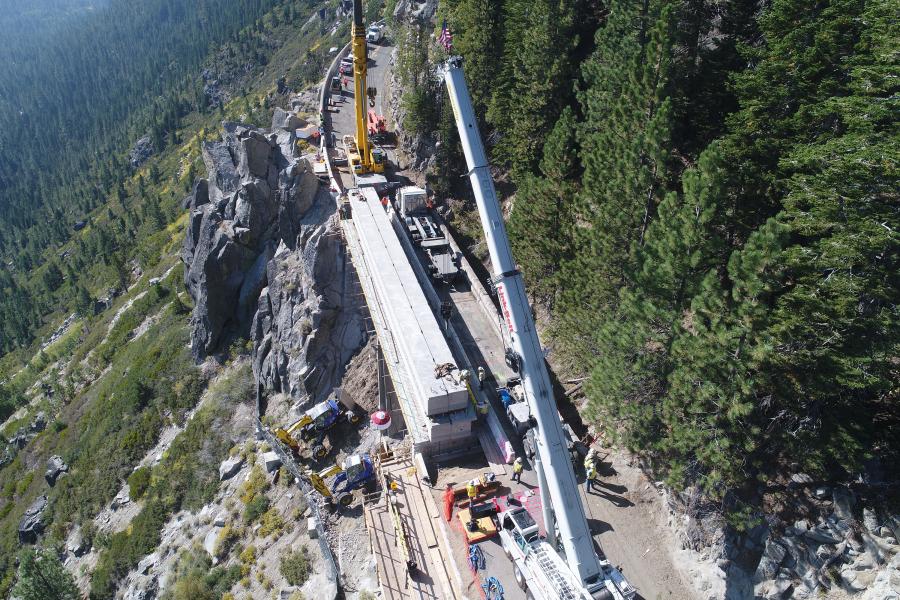 "By utilizing ABC elements with a full closure of the highway, the project was accelerated by about three months and completed in two seasons rather than extending into 2021," said Caltrans North Region Construction Chief Andrew Alvarado.

The work was complex as crews from Q&D also took on the difficult challenge of safely removing large concrete portions of the old bridge, which utilized specialized equipment – Kaiser S2 spider excavators positioned over a precariously steep grade on the side of the mountain and operated by Dyer All Terrain Excavation. 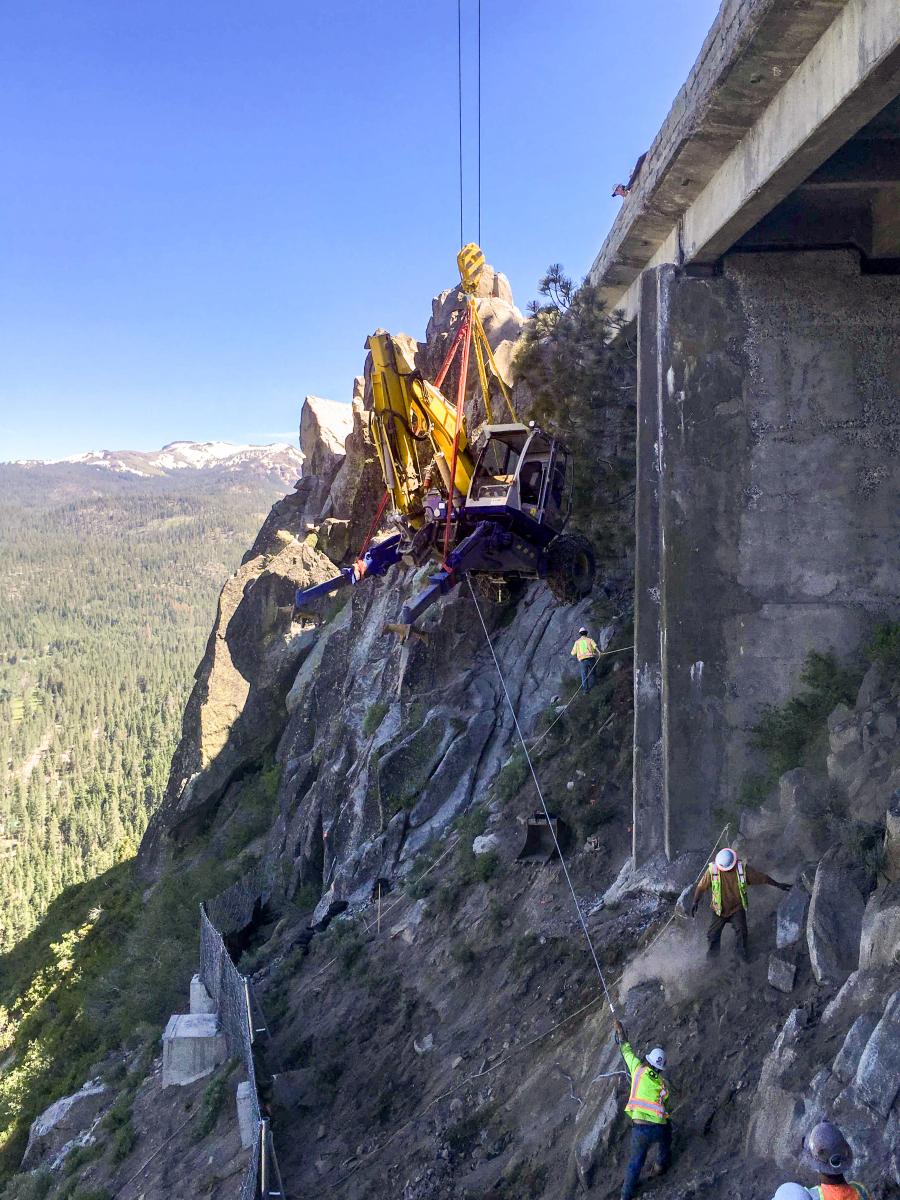 The work began in May 2019 with the construction of the abutments under the bridge and related elements. Last summer, crews focused on constructing the substructure beneath and around the existing structure. Between Labor Day and the winter shut-down in 2020, crews resumed work that required lane closures.

"Heavy traffic and a short time window were the primary challenges associated with the site, which intensified in a very tight work zone," said Marc Leone, Q&D's project manager.

"Extensive planning and layout work was done prior to the marathon closure to ensure cranes were sized appropriately and would fit between the uphill cliff and the hinge point of the road," said Leone. "Tolerances were so tight that the Link Belt ATC 3210 [210 ton hydraulic crane] counterweight nicked the bark of a tree on the uphill side of the road with the crane positioned as close to the downhill edge as our engineer would allow. We literally didn't have an inch to spare.

"The new spread footing foundation required extensive rock excavation using the spider excavators secured to the hill from rock anchors on the cliff," Leone added. "Micro piles were drilled from the roadway, and with equipment cantilevered off the edge of the existing bridge, through the existing deck. Completing the substructure during the 2019 season was a significant accomplishment and the result of teamwork by Caltrans, Q&D and the subcontractors."

The old bridge was demolished over a nine day span. Crews focused their efforts on the outside half of the 24-ft. wide bridge while traffic remained on the western half.

"[One week later], crews had reached a point where a full closure of U.S. 50 was necessary, marking the beginning of the nine-day marathon closure," said Leone. "Upon closure, crews removed the outside girder and diaphragms to make room for the new precast girders. Since the site was too tight for a crane large enough to pick girders with a single crane, a tandem lift was used with a crane on each abutment. 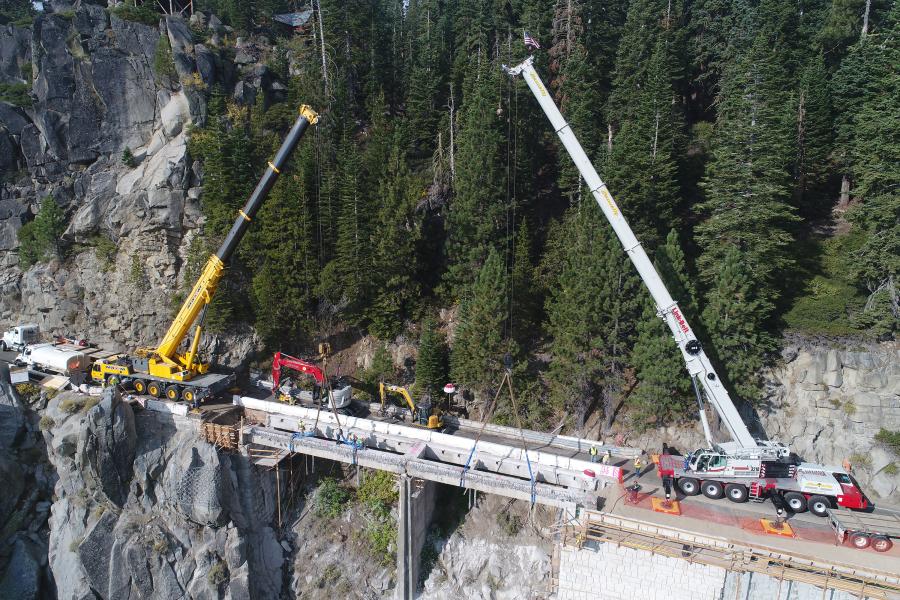 Operators used Link-Belt 245 excavators during the demolition phase, equipped with pulverizers and jaw attachments to remove concrete and rebar from the existing bridge. The Link-Belt machines were rented from Bejac for the demolition. Q&D also utilized a Cat 335 loader and a telehandler from California Compaction via rental, which remained on-site for the duration of the project.

The precast, prestressed girders were installed with ultra-high-performance concrete used to permanently interlock the longitudinal joints. The use of this type of concrete was a first on a Caltrans project at this high elevation – 7,240 ft. above sea level.

The larger-sized cranes were rented from Connolly Crane Services in Gardnerville, Nev., and from Maxim Crane Works in Sacramento, Calif. Much of the equipment used during this project was owned by Q&D, including the Grove RT-880 crane and several Cat 938 loaders and Cat 335 excavators.

Q&D purchases and rents its equipment from Cashman Equipment and Komatsu Equipment, both based in Sparks, Nev.

"Working closely with each dealership allowed us to keep our truncated schedule intact while giving our field team the best-suited equipment for the project," said Kyle Lynch, Q&D's equipment manager. "In such a tight working area we needed a perfect combo of power and size, and each dealer helped us find the machines we needed. Reno being such a small town, you end up with equipment dealers who really feel like they're part of your team every day. And on a project like this you're getting help from multiple places, and their ability to come through for us cannot be understated. Each one of them helped get us to the finish line."

The Q&D team brought together many experienced people, who have worked together on previous projects.

"Keeping everyone on the same page avoided major setbacks, and our planning efforts kept us working quickly and safely," said Bob Garrison, Q&D's structure superintendent. "Every task was intensified by the tight schedule and we had every detail planned down to the hour. This was vital for subcontractors, suppliers and every person in the field." 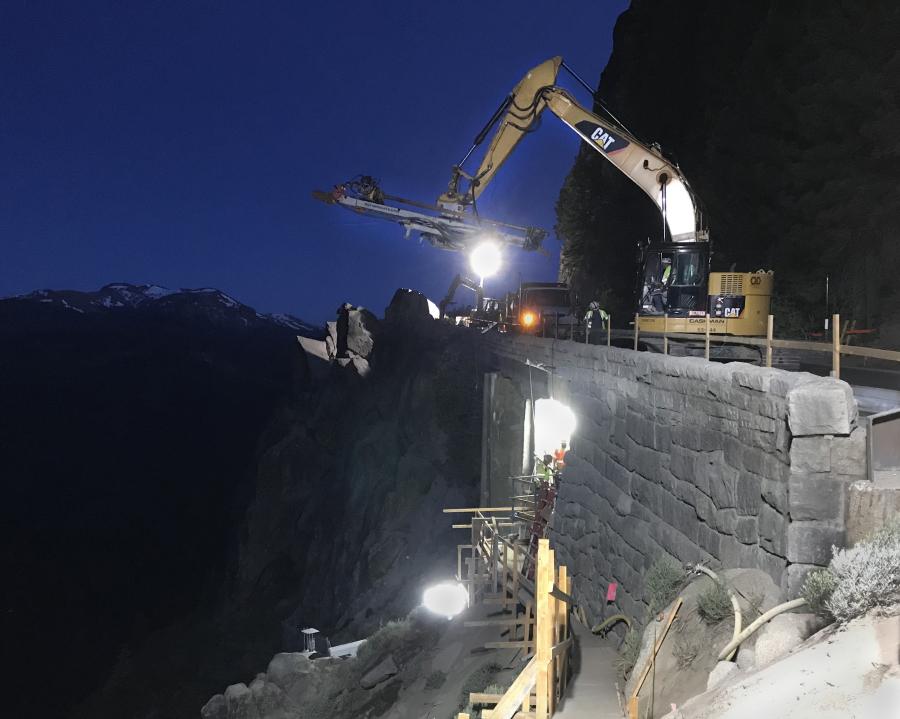 The team dynamic was shaped not only by the complexity and danger of the project, but the timeline and short schedule. Every subcontractor knew the schedule each morning and any changes had to be communicated throughout the teams immediately. When working 24-hour shifts, those changes can make or break a project deadline.

"We were able to make subtle changes that accelerated our schedule, adapting on the fly in most cases," said Eric Pender, Q&D superintendent. "With 24-hour shifts, we had people coming in blind to sudden changes, which affected every trade on the project. Each leader's precise communication meant gaining ground every shift, and ultimately pushing us ahead when it really mattered."

During the full closure, Q&D stationed an on-site mechanic to handle any issues with equipment.

"Wear and tear came primarily in the form of drill heads, loose hoses and cutting edges," said Lynch. "We were able to avoid any major damage to equipment, and the on-site mechanic worked an ‘on-call' style shift after he had finished his regular shift. This was a true testament to the commitment of the team and its planning abilities."

"Caltrans values innovation, efficiency and partnerships," said District 3 Director Amarjeet S. Benipal. "I want to thank everyone who worked on this project for thinking creatively on how to lessen the impact on the traveling public while still building a quality structure that will safely serve motorists for decades to come."

"We appreciated the support and encouragement from local elected officials and partner agencies during work on this challenging project," said Steve Nelson, Caltrans District 3 Public Information Officer of Lake Tahoe Basin/El Dorado County. "The department also extended its thanks to the local businesses, residents and visitors to the South Lake Tahoe area who were impacted by the construction work."

The project was partially funded by state dollars, including $5.2 million from Senate Bill 1, the Road Repair and Accountability Act of 2017. This legislative package invests $54 billion over the next decade to fix roads, freeways and bridges in communities across California, noted the project web page.

"Caltrans is committed to innovative ways to improve efficiency and minimize impacts to the traveling public during construction," said Benipal. "I would like to thank the Caltrans team and Q&D Construction for their outstanding work on this important safety project."