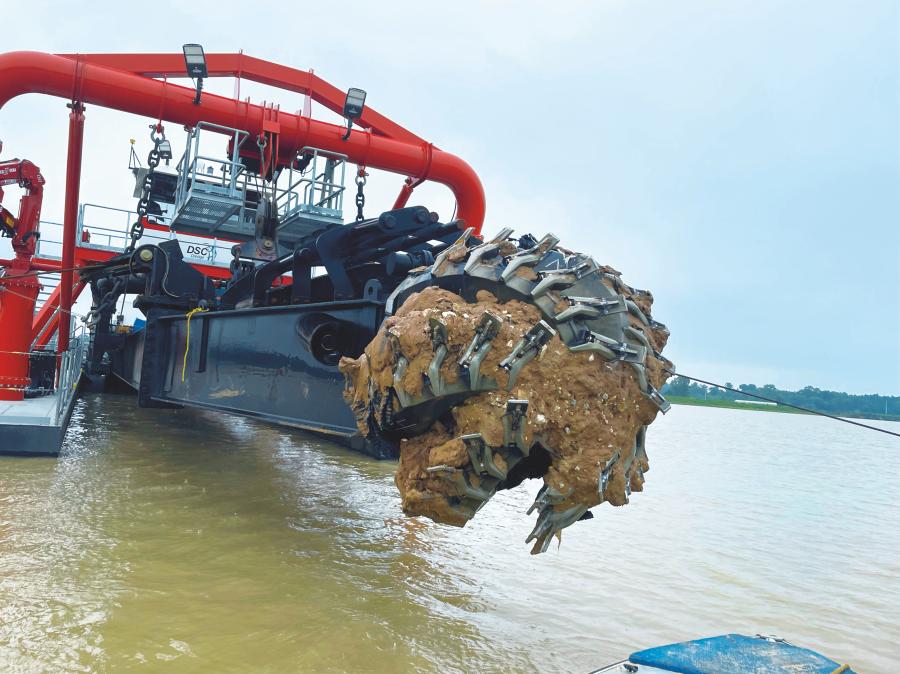 Tomah, Wis.-based specialty contractor Gerke Excavating has more than three decades of experience dredging limestone and more than a decade mining frac sand from ponds, lakes and other bodies of water. Sonar and dredge positioning systems using a Global Navigation Satellite System (GNSS) have been key pieces of the company's technology toolbox for years, helping drive efficiency and productivity on dredge equipment. That customer-focus would prove particularly valuable when the demand for Wisconsin frac sand grew.

In early 2021, Gerke was contracted to dredge frac sand from a 100-acre pond. The frac sand materials are located at an average depth of up to 50 ft., with some shallow areas at 30 ft. and deeper areas up to 80 ft. The production goal is to hit 3.5 million tons across the 8-month production season (March-October), with a production rate of 1,000 tons/hour — all while maintaining setbacks from bordering wetlands and floodplains.

To meet the contractual objectives, Gerke would need dredge equipment built for deeper dredging in rocky conditions and the ability to see and map the mine surface in real-time.

Gerke has long relied on jet suction dredges to remove underwater materials. However, the pond depth and asset material were beyond the capabilities of this machine.

"The bottom of the pond is primarily rock, and the customer needed more tonnage, which would require us to cut those rocks to liberate deeper materials," said Wayne McGinnis, mining operations supervisor of Gerke Excavating. "Jet suction dredge machines are not built to do that. So, we knew we needed a bigger dredge machine with a cutterhead." 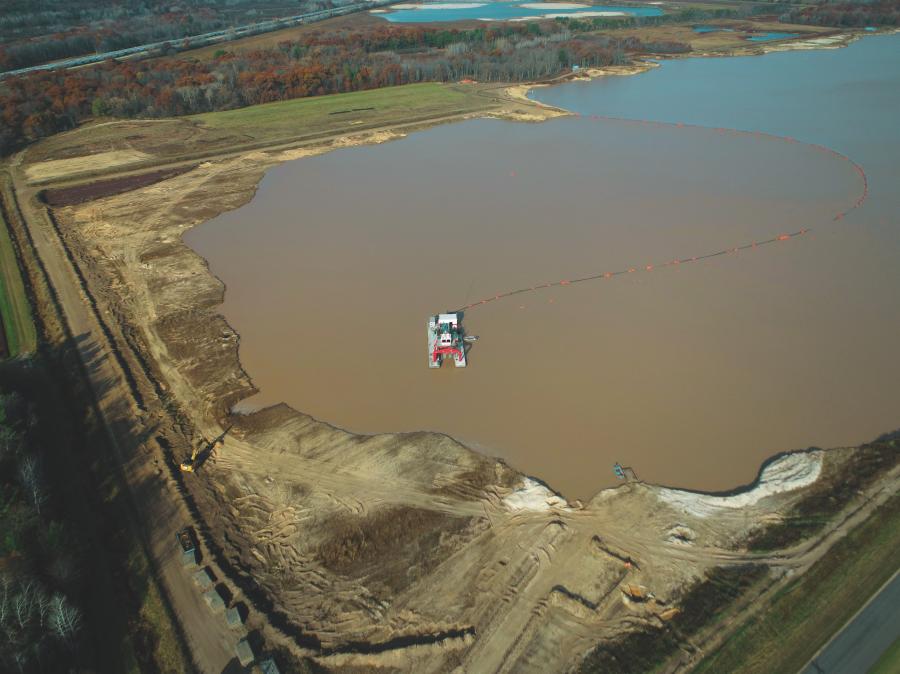 "We know the value of sonar and GNSS individually," said McGinnis. "With these systems, we could position our machines and then see where we were at and where we needed to mine — but it was in two distinct models. DSC VISION brings all of that together in one highly visual model."

For the pond project, Gerke started with a 3D bathymetric model prepared by a marine survey company.

"Once we began dredging, we found it easier to use the map created by the sonars as the frac sand removal progressed," explained McGinnis. "Turns out, the DSC VISION's ability to continually map existing conditions was more accurate than the bathymetric model as we moved along."

That continuous visibility into current conditions has been invaluable. For instance, in 2021, the dredge operators had to do a lot of rock cutting. Once the machine moves to a new area, the sonar conducts multiple side scans of the defined work area and the operator immediately knows exactly where to cut and how deep to go, without waiting for a surveyor. 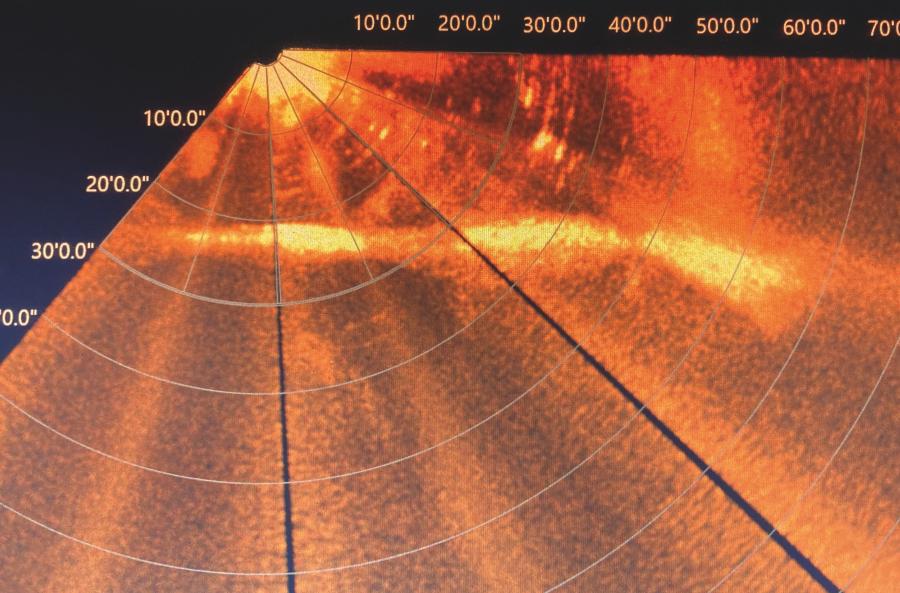 "With DSC VISION, I'm very confident in meeting targets because our operators can see where the material is. For the area that we worked last year, I'm 100 percent confident that we dug to an 80-foot depth," he said.

One of the other advantages of DSC VISION is the ability to set boundary limits for the operator. For instance, when the operator gets near a bank, the system indicates the slopes that they need to achieve.

"On this frac sand project, those limits are particularly important as we are mining close to a wetland and a floodplain," said McGinnis. "Assured setbacks are huge for us, and for our general contractor, who has to report our work to environmental regulators. With DSC VISION, highly accurate, near real-time maps of the pond surface are readily available."

Other applications where DSC VISION has helped include pulling volumes and setting anchor points to position winch lines. One of the unexpected benefits of the system has been cable preservation. Working at night, operators would often catch and cut their swing cables on the cutter head because they couldn't see them.

"Now we use DSC VISION to give them a set point that is visible on the cab screen night and day, which has eliminated a lot of cut cables," said McGinnis.

When asked about training and operator satisfaction, McGinnis noted that, like any new solution, there is some training to get used to features and functionality.

"We trained a number of new operators over the last year," he said. "Many of those individuals had never run a dredge or anything with GNSS. While DSC VISION did require some training, once they learned how to use the map systems, they were all in. It's a lot of common sense, and we're finding that once new operators are up to speed, they perform exceptionally well." 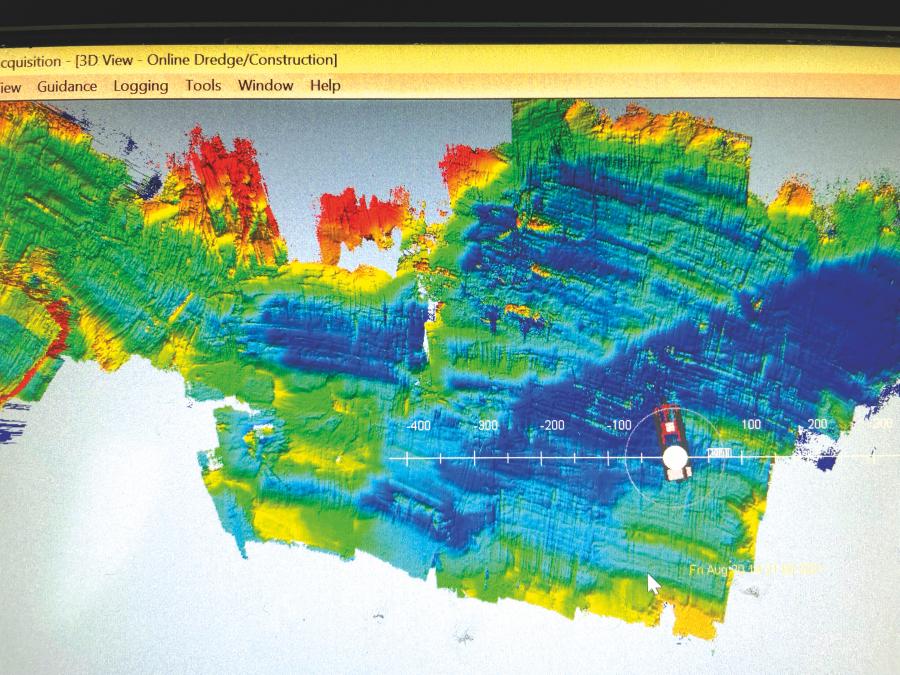 One area of particular benefit is the reduction in setup time prior to dredging. McGinnis estimates that setup time is 50 percent faster than with previous methods.

"That's because DSC VISION scans and measures where we need to be even before we make the move. That capability alone saves us one to two hours on every move," he said.

It's also saved on surveying costs during dredge operations.

"Now we can shape as we dig because the DSC VISION technology is seeing and mapping existing conditions as we go. Not having to place and replace stakes on the job saves us 75 percent on extra surveying," said McGinnis.

Another unexpected benefit of DSC VISION has been communication with plant operators.

"The plant has an expectation of how much material we'll provide on any given day. If for some reason, the dredged material might reduce to 500 tons/hour or we're working in an area with heavy tonnage, our team can radio ahead to the plant manager to be prepared. These plants depend on the consistency of the product. No plant can wash and produce good material with highs and lows — now we can help them operate with efficiency."

As every mine excavation company knows, leaving mine resources at the bottom is lost yield.

"We have just the sonar on one of our other dredge machines, and we're very confident that we're efficiently mining the material at a good production rate," said McGinnis. "The difference is that we don't really know what underwater conditions we are dealing with until we drop in and feel around for a bit." 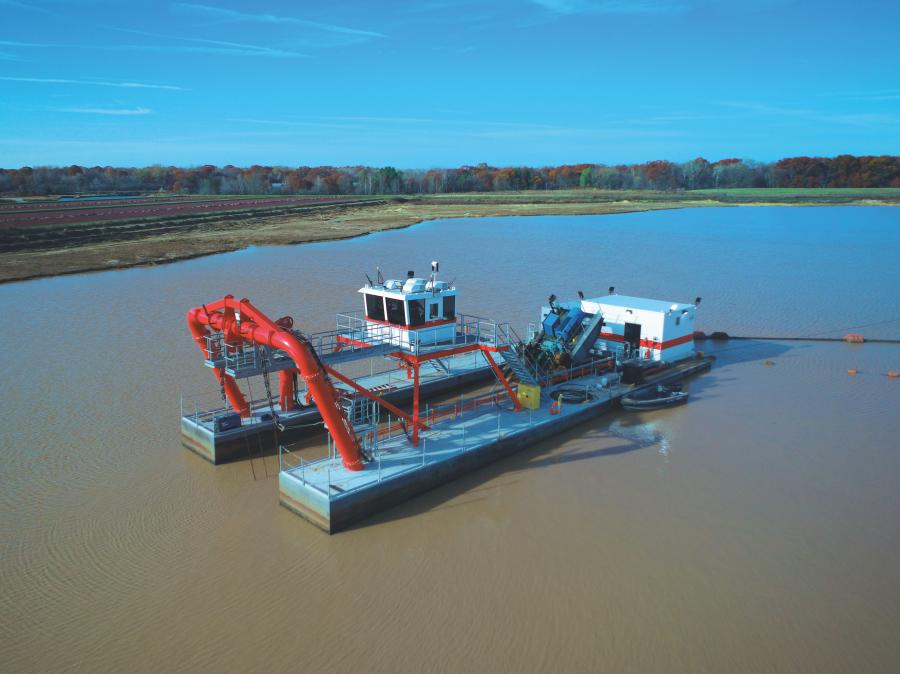 He also noted that they are seeing that the underwater floor isn't nearly as clean as the surface that is left behind with the DSC VISION-equipped Marlin.

McGinnis said that after installation and final commissioning, the dredge guidance system payback was about eight months — but there are many intangible benefits beyond just cost.

"It's hard to measure on a project like this, but imagine if we had gone beyond the set limits into the wetlands? The cost of that overdredge would have been very high. So, in some ways, the value of the system is immeasurable," he said.

One of the other reasons for the success, according to the Gerke team, is the partnership with DSC Dredge.

"We can't afford to lose any days of production if we are to meet our targets," said McGinnis. "When production starts, everything from the dredger to the software has to run reliably. DSC Dredge has been a great partner throughout, helping us find the right tools and technologies to do the best job possible. Even if we have questions beyond the machine, they have answers and are always willing to help. DSC VISION is a game changer for us on the frac sand dredging job and beyond."