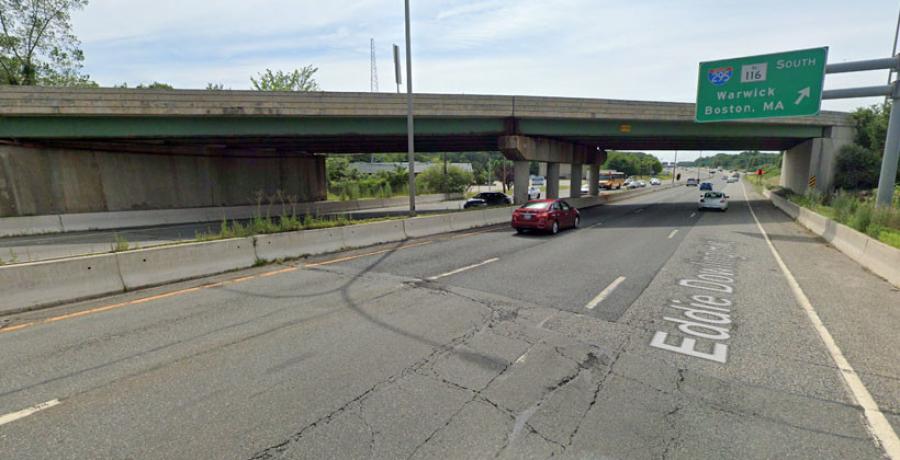 The groundbreaking ceremony, just off Route 146 in North Smithfield, also included Rhode Island Department of Transportation (RIDOT) Director Peter Alviti and other state and local leaders. The event was meant to represent the kickoff of Rhode Island's 2022 construction season.

A press release from the state government noted that the multi-million-dollar highway project is designed to create much needed improvements to the Route 146 corridor, with the goal of making it safer and reducing congestion while also reducing vehicle emissions.

In 2020, Rhode Island's congressional delegation secured a $65 million federal grant from the Infrastructure for Rebuilding America (INFRA) program — the largest the state ever received — to allow RIDOT to properly address all Route 146 concerns within a single project.

The upgrades will replace or repair five bridges, repave 8 mi. of roadway, and build a flyover bridge to carry Route 146 over Sayles Hill Road, thereby eliminating the traffic signal at Sayles Hill Road, the only one on the entirety of the highway. This intersection averages more than 85 crashes per year, according to the transportation agency, and is a source of significant congestion and travel delay.

A breakdown of the work to occur on Route 146 includes:

More than 171,000 vehicles travel Route 146 between Providence and Worcester, Mass., each day, according to the state.

RIDOT noted that the project will be done in spring 2026.

A Busy Year Ahead for Rhode Island Road Builders

The Route 146 project is one of 60 efforts RIDOT will work on in 2022, valued at $1.8 billion. Fueled by an infusion of funds from the federal Infrastructure Investment and Jobs Act, RIDOT has accelerated approximately 100 projects in its 10-year-plan. These projects include bridge rehabilitation, resurfacing, traffic safety projects, stormwater and bike/pedestrian improvements.

For the next five years, RIDOT will focus its efforts on paving. It has committed $92 million to paving projects this year and $422 million over the following four years.

In fact, one of the first tasks to be done on the Route 146 project will be to repave badly deteriorated sections of the highway this summer.

"Thanks to the Biden administration and our congressional delegation we are kicking off construction season with an infusion of federal funds that will go towards fixing our roads and bridges and creating good paying union jobs," McKee said at the groundbreaking. "As construction kicks off across our state, I ask motorists to be on the lookout for construction zones and to drive carefully when around them."

In his remarks at the ceremony, RIDOT Director Alviti said, "We'll take the same aggressive approach we utilized in the RhodeWorks program to fix our structurally deficient bridges and bring our long-neglected roadways into a state of good repair."

In addition to the Route 146 Project, other major projects under construction in Rhode Island this year include:

"Not only will [the Route 146] project relieve congestion, but it will be a relief for drivers who will no longer have to navigate gaping potholes on their daily commute," said Reed, a senior member of the Senate Appropriations Subcommittee on Transportation, Housing and Urban Development (THUD).

"For years, [the highway] has been one of the most problematic stretches of road in the state. After decades of patches, it is in dire need of repair. I'm proud to help deliver federal funding to fix this heavily used roadway and modernize it to improve safety, better integrate public transportation and technology, and boost local businesses."

From his position in the U.S. Senate, Whitehouse authored the INFRA program in 2015 to help meet Rhode Island's need for large-scale infrastructure investments.

"I created the INFRA program to accomplish major once-in-a-generation infrastructure projects that states typically don't have the resources to do on their own," he said in the Rhode Island Government press statement. "I'm thrilled that RIDOT won its largest federal grant ever from my program, and that the funding will support job-creating upgrades to Route 146, including the elimination of the dangerous Sayles Hill bottleneck. Driving Route 146 will soon be a whole lot more pleasant and efficient."

The Route 146 Project is made possible by RhodeWorks, RIDOT's ongoing commitment to repair structurally deficient bridges and bring the Rhode Island's transportation infrastructure into a state of good repair, promote economic development, and create jobs.

Now in its seventh year, RhodeWorks program has overseen 237 projects that include work on 359 bridges. In total, RIDOT has completed 196 projects, valued at $3.1 billion.