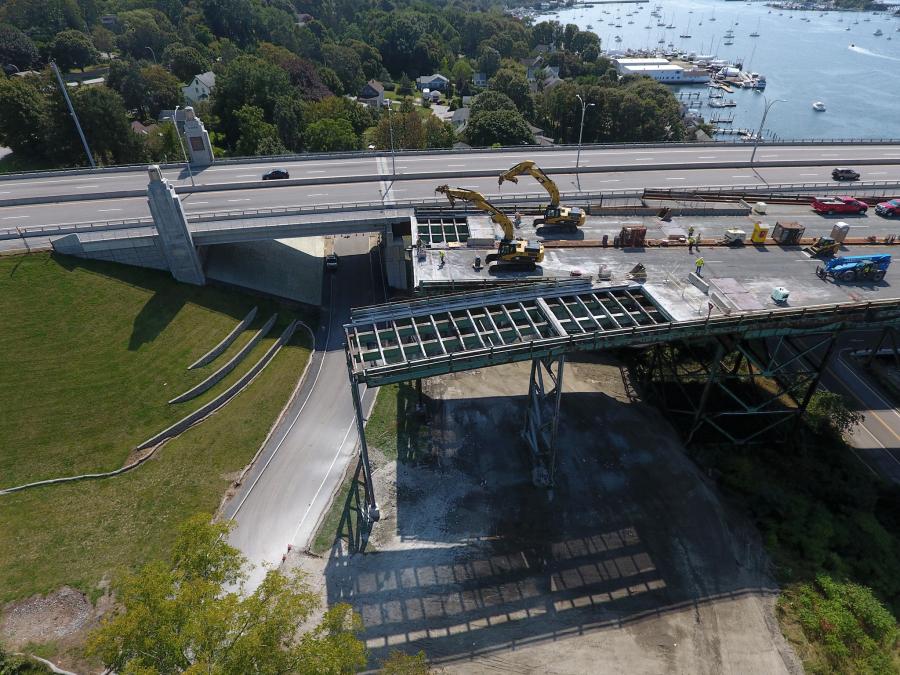 The Rhode Island Department of Transportation (RIDOT) is removing more than six million lbs. of steel and 2,700 cu. yds. of concrete across 17 spans between the Sakonnet River Bridge’s piers, for a total of 2,178 ft.

As part of a two-phase process, construction crews in Portsmouth, R.I., are demolishing the old Sakonnet River Bridge one piece at a time. The Rhode Island Department of Transportation (RIDOT) is removing more than six million lbs. of steel and 2,700 cu. yds. of concrete across 17 spans between the bridge's piers, for a total of 2,178 ft.

“The bridge dates back to 1956,” said RIDOT spokesman Charles St. Martin, who noted that the structure was closed five years ago with the opening of the new Sakonnet River Bridge. “Unfortunately, lack of maintenance by prior RIDOT administrations led to excessive steel corrosion, to the point where RIDOT had to implement a weight limit and establish a long detour for truck traffic before the new bridge could be opened to traffic in 2012.”

The long-overdue process removes the bridge from east to west. Residents along the shore will see the bridge slowly deconstructed over a period of several months.

“RIDOT had pursued a plan to demolish the bridge as soon as possible, but because of environmental concerns from the regulatory agencies regarding the substructure demolition and in-water impacts to marine species, RIDOT split the contract in two, focusing on the superstructure of the bridge now.”

Crews are dismantling the bridge with great precision and attention to detail.

“We saw-cut sections of the bride deck and lifted by excavator and transported to the end of the bridge for transport by truck,” said St. Martin. “Steel sections are either cut with torches or mechanical shears.”

The current total project cost is $15 million. Cost estimates for the next phase are being developed as part of the permitting process. The final outcome of what's allowed for demolition methods under the permit will affect the price.

Officials hope to begin the second phase in 2019. This phase will address in-water and land-based substructure elements. RIDOT has considered using controlled explosive demolition, as it did for a portion of the former railroad trestle adjacent to the old bridge, and for the old Jamestown Bridge. RIDOT intends to begin work on the second contract as soon as possible after the completion of the first phase.

“We are looking at mechanical and controlled explosive demolition methods, and a combination of both, as part of the permit process. That will determine the extent of the use of hydraulic hammers versus sections that could be removed with explosives.”

St. Martin said it was important to conduct a new engineering inspection of the bridge to ensure the safety of workers, and to make certain the equipment they are using can be adequately supported by the old bridge. The temporary closures of the channel on the Sakonnet River where it passes underneath the old Sakonnet River Bridge in Tiverton and Portsmouth also had to be carefully planned.

Work on the first-phase demolition effort began late last winter, and should be completed by summer 2018.

According to RIDOT project manager Jody Richards, “The biggest challenge was developing a plan to remove the bridge piece by piece, given the bridge's current condition. For example, steel plates were added to spread the load of construction equipment operating on the bridge. Additionally, the bridge's deck was removed in five-foot sections, one row across the width of the bridge at a time, to carefully unweight the bridge as evenly as possible.

“For the center span removal, we have to add supports from the undersize of the structural steel to the existing piers. The center span may then be lowered into place onto a barge below, then further dissembled.”

Work continues on removing the concrete deck slabs and structure steel members on the east side using two crews. The progression of deck removal is entering the area above the center navigation channel. Subsequently, RIDOT has closed the center channel for approximately one month. Another closure will be scheduled for late winter. Vessels will be unable to enter or pass through the channel under the bridge while the demolition occurs from 6 a.m. to 6 p.m, Monday through Saturday. The channel will be open all day Sundays.

Demolishing the bridge has, understandably, required a great deal of coordination.

“In this case, the removal has to be carefully engineered and carried out,” said Richards. “Partly because it's a truss, how the removal of individual pieces affects the rest of the structure. It's a much more surgical process. And because it's over water, wind and weather conditions are a factor, as well as assuring the safety of workers. They have to be on a portion of the bridge while we remove other portions. With many typical demo projects, crews work from nearby land areas, and aren't physically on the bridge when it's coming down.”

An unexpected weather event had a dramatic impact on the tear down, as workers faced tsunami-like conditions.

“The high winds from that storm broke large areas of the debris netting, and they could not work in high wind conditions. Along with that singular storm event, we had several days of high winds. And we've had a couple of other high-wind storms in the past several weeks. In advance of these storms, we had to spend time securing materials.”

The elements may prove difficult looking ahead, as workers prepare for future high wind possibilities, along with heavy snow and icing. Lightning also could be a problem in the area, although not common in winter months.

Crews have removed about 40 percent of the deck slab and two spans worth of structural steel, so far, and have completed all protective netting for debris and migratory birds.

“It's a condition of the permit that we don't affect migratory birds,” said Richards. “If they established nests, we would have to stay 150 feet away from them for several months, until the nests were vacated. For debris netting, that also is a condition of our permit, that no debris enters the water. And we wanted to ensure the safety of any boaters underneath, as well as cars. A portion of the bridge is over a local road and boat ramp.”

Small portions of the bridge had been removed as part of the contract to build the new bridge, as the footprints of the bridges overlapped slightly where they met the land on either side. This was more so on the Tiverton side, than Portsmouth.

The most time-consuming part of the work is the deck removal that is now under way. Production is about 20 to 30 ft. per day.

“We are using both barges and cranes to pick larger sections of steel, as well as barges to hold large steel members before it's either cut up for truck transport or left for water transport to a scrap metal facility.”

S & R Corporation of Lowell, Mass., is the general contractor on the project, while Commonwealth Engineers & Consultants Inc. of Providence is serving as the engineering firm.

In 2003, RIDOT formally announced plans for the $120 million replacement bridge to be built just south of the existing bridge. Groundbreaking for the structure took place in April 2009, with the new bridge officially opening three-and-a-half years later.