In a four-year period from 2016 to 2019, RIDOT will have purchased 71 new trucks, helping to further increase its fleet, replace aging, worn-out vehicles and reduce the need for rental vehicles. 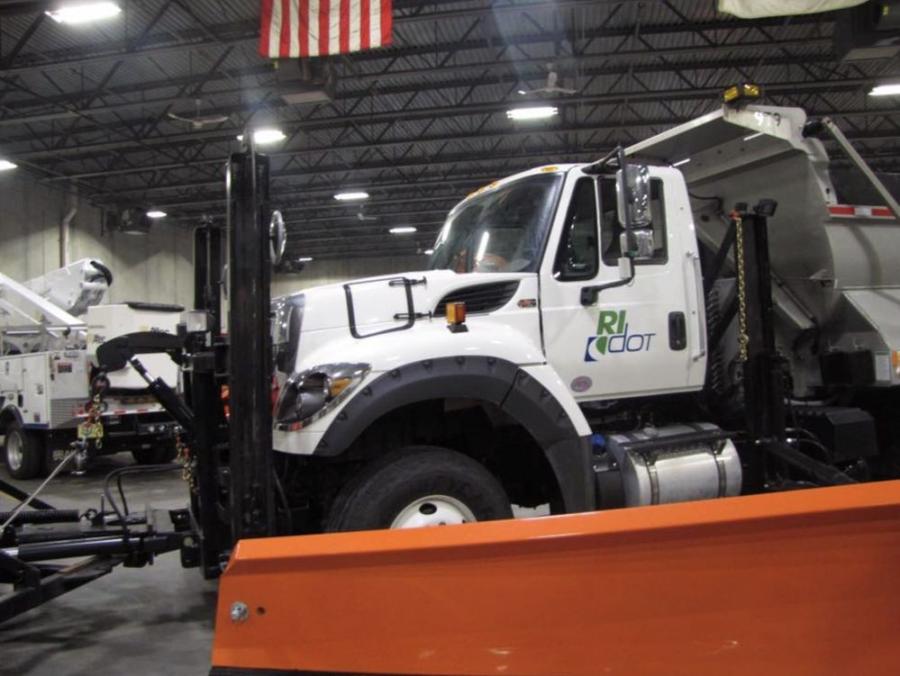 Due to a $100,000 grant received from the FHA’s Road Weather Management-Weather Savvy Road Program, the department will outfit up to six trucks with innovative sensors to provide real-time data on air and pavement temperatures and humidity levels. (RIDOT photo)

Gov. Gina Raimondo announced that the Rhode Island Department of Transportation (RIDOT) has taken several steps to bolster its ability to plow and treat the roads this coming winter. The department is expanding its fleet of plow trucks and drivers while deploying new technology to get real-time information on weather and road conditions.

“We've all enjoyed the mild weather this fall, but winter is coming and we're more than ready to tackle whatever Mother Nature throws our way,” Raimondo said. “RIDOT has increased its snow fighting capabilities to keep the roads safe and clear them as quickly as possible after the last flake flies.”

“The safety of the traveling public is our highest priority at RIDOT, and we've been working throughout the year to improve our winter storm response,” Peter Alviti Jr. RIDOT director said. “With new trucks, new staff and new technology, we're well positioned to respond to any type of winter storm and keep our roads passable.”

RIDOT has added 15 new plow trucks, which expands RIDOT's fleet to 142 trucks. As the department grows and modernizes its fleet, it has increased in-house capacity and coverage. In a four-year period from 2016 to 2019, RIDOT will have purchased 71 new trucks, helping to further increase its fleet, replace aging, worn-out vehicles and reduce the need for rental vehicles. RIDOT supplements its plows with assistance from outside vendors that augment the state fleet during significant storms.

RIDOT also is fulfilling Raimondo's commitment to increase RIDOT's maintenance staff, with 40 positions added last year and another 20 this year. These additional staff not only represent additional drivers, but also are available year-round to increase the department's ability to perform other maintenance tasks such as drain cleaning, grass cutting, repairing broken street lights and traffic signals, and picking up litter.

This winter RIDOT is conducting a pilot program to test high-tech portable weather sensors in its trucks. Due to a $100,000 grant received from the Federal Highway Administration's Road Weather Management-Weather Savvy Road Program, the department will outfit up to six trucks with these innovative sensors to provide real-time data on air and pavement temperatures and humidity levels.

This information will be displayed in the vehicle and will be transmitted to RIDOT's storm operations center. This information will aid RIDOT in its storm fighting strategy to respond to changing weather conditions. The sensors will work in conjunction with a network of more than a dozen fixed weather stations previously installed in various parts of the state.

Following the harsh winter of 2015 during which road salt was in short supply in the northeast, RIDOT established a strategic salt reserve. Now located close to RIDOT's salt supplier on Allens Avenue in Providence, the reserve includes 10,000 tons of salt to provide a backup to current inventory. Elsewhere in the state, RIDOT has stockpiled 56,000 tons of salt with all piles and salt barns full.

RIDOT also will continue the use of its salt-brine pre-treating solution, which is manufactured at its Midstate facility in East Greenwich. This solution can be sprayed on the roadway up to three days before a storm, depending on temperature and precipitation, and dries quickly to leave a layer of salt, which starts the anti-icing process as soon as it begins snowing. Salt brine also is used on salt spreaders on the back of plow trucks to pre-wet granulated salt, limiting scatter across the roadway and conserving salt.

As salt is the most expensive component of RIDOT's winter operations, the state fleet is equipped with GPS-enabled closed-loop salt spreaders, which carefully meter out the amount of salt being put down and reports that information back to RIDOT's storm operation center. The technology provides real-time data on salt applied to particular routes to help manage storm response, and helps minimize the environmental impact of winter operations.

RIDOT also will continue use of automated pothole patching machines, with five trucks available this season. This is the third season using on-call pothole patching services that utilize spray-injection technology to repair potholes more efficiently and safely while ensuring a longer-lasting fix.

The patchers — which are controlled by a single operator from the cab of a truck — are capable of cleaning away debris and filling a pothole in only a few minutes.

This process provides a hot-patch equivalent in the winter months (typically unavailable from December through March) to make a permanent repair. Patches made in the first year of the use of the automated patching systems back in 2015 are still in place today.

This equipment provides a more durable and longer lasting patch than temporary repairs made using cold patch — which in the past had to be re-applied during the course of the winter until hot patch became available in the spring. As a measure of the effectiveness of the automated pothole patching machines, in the past two winters, both the number of pothole claims and number of reports of potholes to RIDOT have dropped substantially.