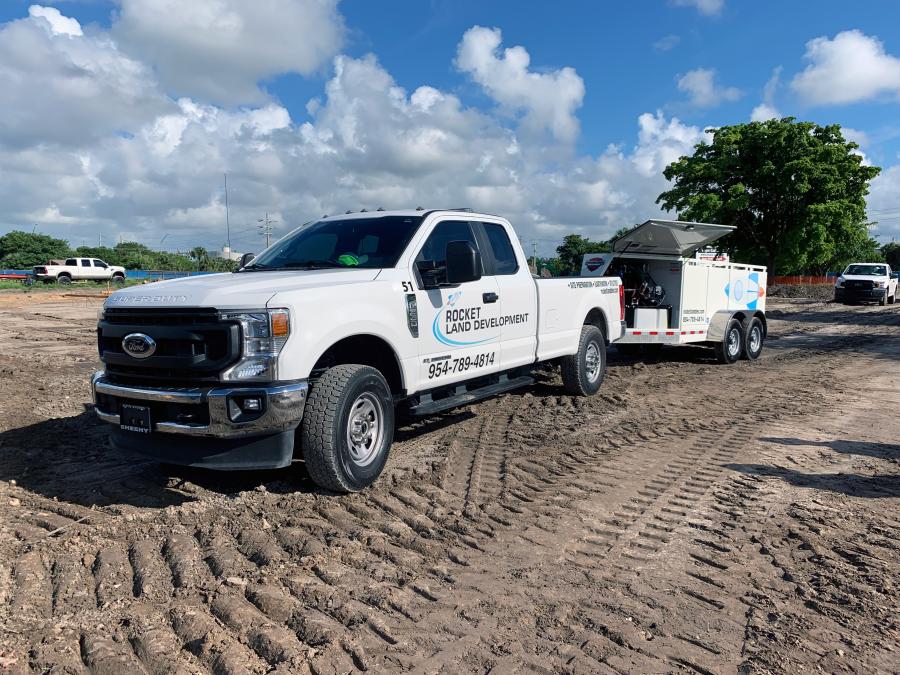 With the trailers, the Rocket Land team stores their fuel at the job site in bulk, using a fueling vendor to deliver diesel. Then, using both the trailers and nurse tanks in the back of their pickup trucks, the team shuttles fuel to a variety of job sites they have running simultaneously.

From his early working years, George Rembos has had a passion to build his business from the ground up in the tropics of south Florida. Being in an environment he's passionate about assisted in the creation of Rocket Land Development, which started in 2011.

Rocket Land Development is a civil site contractor performing earthwork, underground utilities, storm drainage, sanitary work, water distribution, fire mains, erosion control and anything else that's needed for the site construction of a project. Rembos' passion for both the work and the people he employs and works for have been driving factors of success of Rocket Land Development.

"The thing I love most about being a civil contractor is being able to see the site change," Rembos said. "We come in, strip everything out, put all the critical infrastructure in, put the paving down the concrete. You really get to see the transformation from start to finish."

South Florida has shown continued growth potential as more people flock to the south, whether for business or pleasure and the multitude of reasoning for relocations or reconstruction pushes the need for premier contractors to do both commercial and residential projects. The Miami and south Florida market has kept Rembos and his employees hustling. The amount of work on their plate has put a premium on what sets Rocket Land Development apart from their competitors: Service.

"Not only do we have the best technology and newest equipment, but we've also have 3D GPS enabled dozers, laser-grading equipment…and more." Rembos said. "But I take pride in the service we provide and our team is always there. My number is on the side of the vehicles and on the side of the trucks. I'm not trying to hide. I'm trying to be found."

Rembos may not hold a marketer's title, but has tricks up his sleeve to make people turn their heads and hold their attention. The idea behind the oversized rocket decals that emblazon his machinery is that it makes an impact in many people's minds. He believes that you have to create an environment where people can get behind and want to move forward with.

The rocket branding allows people to know where they are, and where they can be found. The branding goes farther than the equipment, it bleeds into the shirts, vests and hardhats that every employee wears, Rembos said.

"The story behind Rocket is really about culture. The rocket itself symbolizes technology, precision, fast and quality work. That's what we strive to do. Specifically, I spent some time in Huntsville, Alabama, which is Rocket City, USA, which is where I originally made the choice to go out and start my own company. To pay some homage to them, we titled it Rocket Land Development.

"Our marketing philosophy is to be present and be found. It ties back again to the service.

Rocket Land Development invests in its equipment as much as it does people. It believes evolving, changing and adapting new ways to stay efficient and provide the best service and work is essential to staying ahead of the competition. That's when the company's Thunder Creek Equipment fuel trailers — an MTT 690 and MTT 460 — entered the picture.

"We came to the decision to purchase the trailers because fuel is always a logistical problem. If we don't have fuel our equipment's not running, in turn means we're not making money."

Rembos found Thunder Creek and knew immediately it fit his needs. He's seen how it has positively impacted their effectiveness and efficiency, as well as their bottom line.

With the trailers, Rembos and the Rocket Land team store their fuel at the job site in bulk, using a fueling vendor to deliver diesel. Then, using both the trailers and nurse tanks in the back of their pickup trucks, the team shuttles fuel to a variety of job sites they have running simultaneously.

Being a heavy civil contractor, Rocket Land Development has many large pieces of equipment that are always in use. Rembos has seen nothing but positive outcomes after adding the Thunder Creek trailers to his fleet.

"It pulls beautifully. You barely even know it's behind you." Rembos said. "The ability to have a non-CDL, non-HAZMAT endorsement product that we can pull behind virtually any vehicle in our fleet just plays to our flexibility, not alone as a company, but to their projects as well." 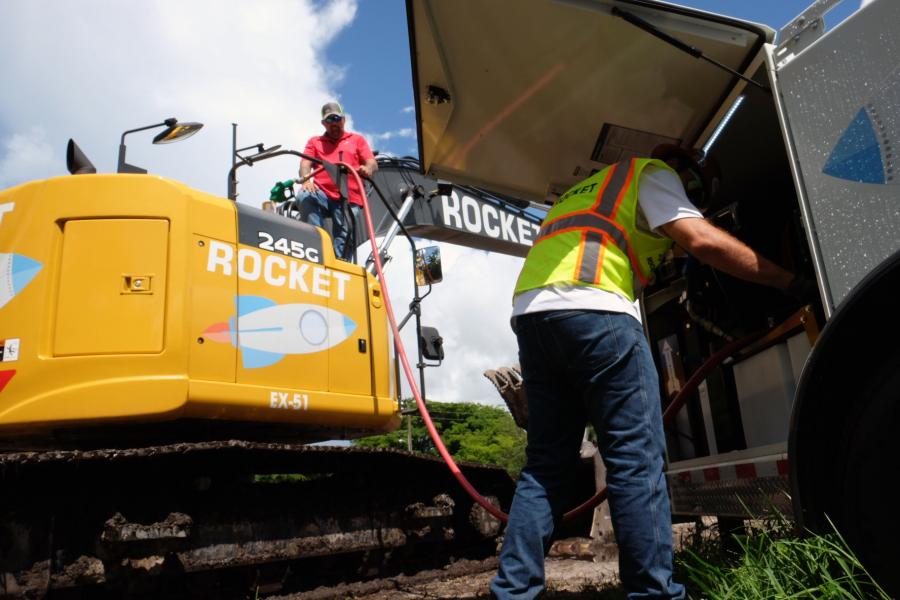 The trailers have allowed them to have the fuel on hand to be responsive, and meet their client's needs, regardless of the situation.

"Whether it's an emergency disaster event, or just a typical Tuesday, we know we always have fuel onsite to make sure our crews are running."

One of Rembos's superintendents, John Zimmerman, also has seen nothing but positive impacts from the use of the Thunder Creek.

"We have the smaller trailer, so I've got anywhere between 500 and 1,000 gallons at any given time," Zimmerman said. "I can leave the trailers on the job site so that the operators and foremen can fuel themselves."

Zimmerman has been in the industry for more than 30 years and discussed how he's seen it all when it comes to fuel trucks and trailers, but when he joined the Rocket Land Develeopment team, he was in awe at the trailers.

"It negates the fact of having to have a specialized driver for a fuel truck. Any of my team members have the ability to move it if they need to."

The financial gain is something Zimmerman also has seen positive impacts on.

"Saving the company money and the ability to be able to go and get the fuel when the prices are good because we have the trailer is another way we save a lot of money," Zimmerman said. 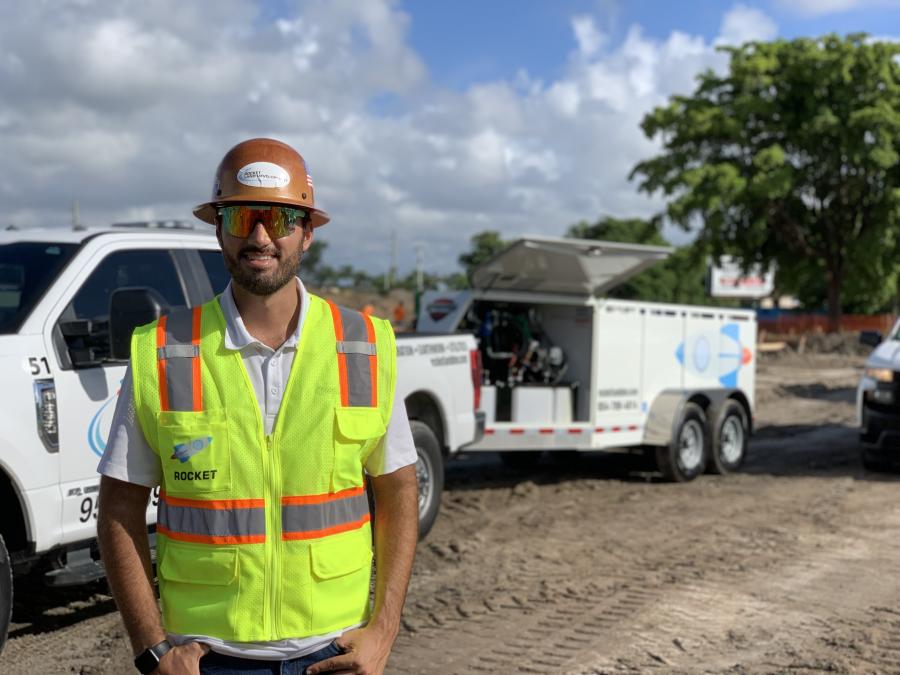