Construction on the LEED building, designed by Fanning Howey, began in October 2015. 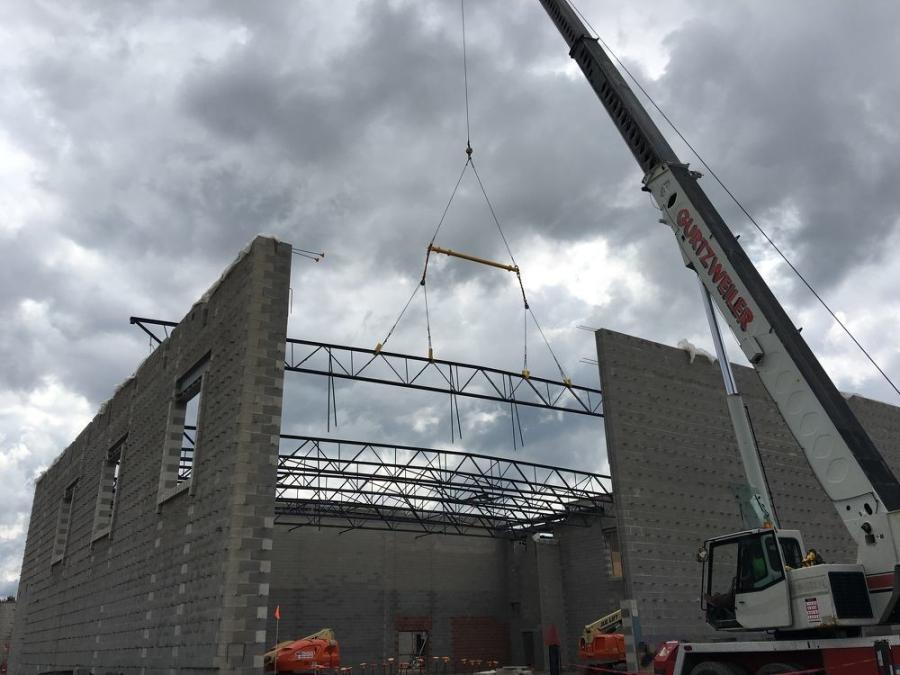 The school, which acheived LEED Silver certification, is located on the site of the Olney School and the Olney Elementary School that have been demolished, and adjacent to Northwood High School, which will be repurposed with the 800-seat auditorium and 10,000-sq.-ft. gymnasium used by the district and various NLS administrative offices moving in.

The new school incorporates architectural elements of the former schools, such as Olney's Woodville Road limestone entrance and the gate from the Olney courtyard. The schools at this site have been home for generations of students.

The school project was funded with $11.5 million from the Ohio School Facilities Commission, with the remainder funded by the local school district.

NLS Superintendent Greg Clark noted that the school is a must for the community.

“The new state-of-the art facility is really serving our kids really well,” he said. “The 21st century design creates collaborative spaces for teaching and learning that we just did not have before. The fact that were able to harvest natural light creates a positive learning environment and makes for a more pleasant atmosphere. We wanted a building that was non-instituational. One of the unique features is that the school has a distributed library, which means that instead of building a library inside of a school, we built the school inside of a library.

“The students were really excited by the water bottle fillers and air-conditioning,” he said, “and the staff are excited by the classroom furniture that works better for kids.”

More than one year of planning went into the design of the new T-shaped, primarily two-story school that has 50-plus classrooms, two gyms, one large cafeteria, spacious hallways and public spaces and staff offices and lounges. It also has six pods with a learning common space in the center of the building, which is surrounded by classrooms. The first floor will house the elementary school, with the upper floor reserved for the high school students.

The demolition of the two schools was completed in November 2017.

“There were no challenges,” said Chris Stueve, Rudolph Libbe's project manager. “The Olney Elementary School building took about three weeks and the Middle School took about four weeks for demolition. The site was prepared right away for new construction.

Concrete and steel debris were sent to recycling centers, in accordance with LEED specifications.”

Work on the foundation of the new school began in March 2016.

“It took three weeks to put in the new foundation,” said Stueve.

The upper floors were completed and enclosed by December 2016.

“There were no major challenges,” said Steuve. “We planned the project thoroughly and it progressed smoothly. The construction went well and we got the kids into the school on time. The exterior and interior work was done simultaneously. It's a very futuristic, new age design with the most current technology.”

“We had three months to plan the work schedule and set the benchmarks,” said Stueve. “We anticipated most of the challenges. It's becoming easier to construct LEED buildings and the lessons learned on previous LEED projects helped with this one.”

“Establishing and following the construction process was the key to scheduling the subcontractors' work, especially when the building was enclosed,” said Stueve. “We all worked as a team to get the job done. The school was very supportive and helpful. They attended all the meetings and quick to respond on everything. Fanning Howey and the subcontractors were great to work with.”

On average peak days there were about 80 workers on site, working day shifts from Monday to Friday. The site provided sufficient space for the setting up of temporary offices and storing of materials. There were no noise issues or traffic impacts due to the construction.

Rudolph Libbe's closest office was 10 mi. away in Walbridge.

“It's our headquarters, and includes our operations and maintenance staff,” said Stueve. “There were only normal wear-and-tear issues. Routine maintenance and repairs could be done very quickly.”