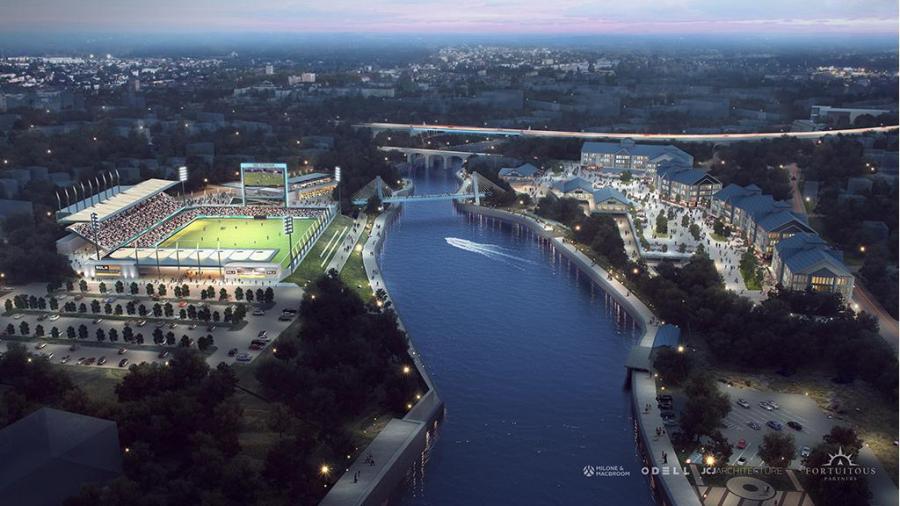 The new professional stadium in Pawtucket would sit on the west bank of Seekonk River, just south of the town's center. (Photo courtesy of Fortuitous Partners)

A sea of white hardhats and neon vests could be seen Aug. 12 at the groundbreaking ceremony for Pawtucket, R.I.'s new Tidewater Landing soccer stadium and mixed-use development — a project to be partly funded by local taxpayers through a $36 million bond.

The riverfront soccer-specific stadium will be home to the United Soccer League's (USL) 2024 expansion club in Pawtucket, according to SportBusiness, a London-based news site. It added that the 10,500-seat stadium, on the banks of the Seekonk River, is projected to be complete in the spring of 2024.

In addition, the Rhode Island arena is one of 16 soccer-only stadium projects across the USL as well as one of five current construction projects in the league's Championship and League One divisions, reported SportBusiness.

While the hallmark of the Tidewater Landing project will be the soccer venue, the plan also calls for 500 apartments in a mix of one- to three-bedroom units, and commercial spaces.

Rhode Island Gov. Dan McKee, speaking at the event, said the Pawtucket project is one of many private efforts the state supports, and is part of its desire to build new infrastructure in the city, like the commuter rail line connecting to Boston.

"This project is about jobs and helping a city that was left behind," he added.

In an interview with the Providence news source, Pawtucket Mayor Donald Grebien explained that Fortuitous Partners' overall project, now believed to cost $400 million, will enhance a separate municipal idea to build a pedestrian-friendly corridor leading to the downtown.

For instance, just a short distance away and across Interstate 95 is the landmark Apex building, which Grebien said the city bought for $17.7 million and hopes to redevelop. In addition, about a mile down the proposed pedestrian path, is the new Pawtucket-Central Falls commuter rail station, with a terminus in Boston.

The conversion of old mills into new housing also will bring more foot traffic into Pawtucket's downtown and create a walkable area along the river, he noted, thus attracting the foot traffic that the city's businesses need to survive.

With I-95 slicing through Pawtucket, Grebien told the Journal he believes that projects to build a corridor that can be used by pedestrians and bicyclists would go a long way toward healing that cut. 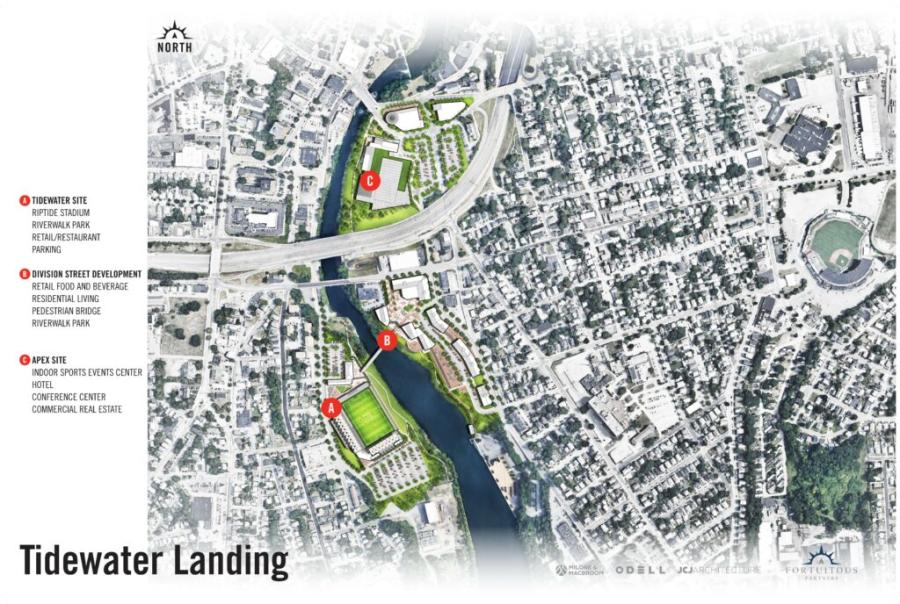 While the hallmark of the Tidewater Landing project will be the soccer venue, the plan also calls for 500 apartments in a mix of one- to three-bedroom units, and commercial spaces. (Photo courtesy of Fortuitous Partners)

What is Proposed at Tidewater Landing?

Make no mistake, the riverside Tidewater Landing project in Pawtucket is much more than a soccer stadium on Taft Street.

According to the Providence Journal, the project's 500 apartments are to be built next to a parking garage, both of which will have easy access to a pedestrian bridge, a small riverfront amphitheater, river walks on either side of the Seekonk, and new restaurants and retail spaces, according to a layout of the development.

Tidewater Landing's pedestrian bridge also could connect the Taft Street developments to similar projects along School Street, on the opposite side of the river, the newspaper reported. Commercial space totaling 60,000 sq.-ft. is planned, along with 57,000-sq.-ft. of shopping and restaurant space, and the 750-space parking garage.

The stadium site, with the field markers already laid out in white on a black surface, is a brownfield that used to be home to National Grid's oil tanks and is currently being remediated by the company.

With an estimated $124 million price tag, the Pawtucket stadium could be the most expensive ever for a team in the USL Championship, a second-tier league within American professional soccer.

In 2021, the stadium's original cost was projected to be much lower at $84 million but rising construction costs elevated that price. The total cost of the Tidewater Landing development also rose from $284 million to $400 million.

The Journal reported that housing has long been a part of the mixed-use project and a $36 million bond passed by the state had been intended to build the planned apartments. Instead, that money will go toward paying for the stadium, after McKee cast the tie-breaking vote to approve the public financing plan on July 25.

Now the total public commitments to the stadium, including tax credits, state and city funding, is estimated to be approximately $60 million.

The newspaper added that Pawtucket is contributing $9 million to the Tidewater Landing project, and a tax treaty that will save Fortuitous Partners $15 million over 20 years, per a presentation in June to the Rhode Island Commerce Corporation.

The biggest chunk of public funding would come from a Tax Increment Financing plan, where taxes collected in neighborhoods around the stadium would be diverted to repay construction debt.