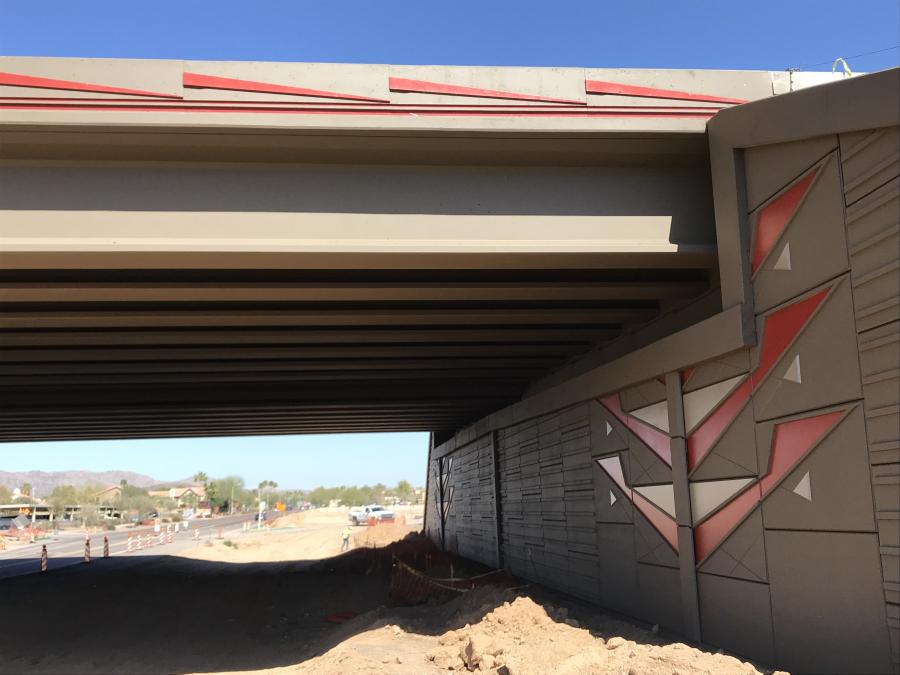 The Loop 202 South Mountain Freeway has its first splash of color, with a little inspiration from Frank Lloyd Wright.

Crews recently gave the future 40th Street traffic interchange in Ahwatukee desert earth-tone base paint, which will be used throughout the 22-mi. corridor, along with a reddish accent color resembling an ocotillo flower on the retaining walls, abutments and bridge barriers.

It's the first of 40 bridges on the project to be painted by Connect 202 Partners, the developer of the South Mountain Freeway.

The aesthetics of the South Mountain Freeway include designs celebrating some of Frank Lloyd Wright's early experiments in desert architecture, as the modern architect had a camp, called “Ocotillo,” in the late 1920s in the area now known as Ahwatukee.

ADOT partnered with the Frank Lloyd Wright Foundation to design aesthetics for bridges, sound walls and other freeway elements that honor Wright's early works in Arizona.

Approximately 160 gal. of paint, enough to paint the exterior of 13 homes, was needed to spray paint the 40th Street bridge.

The base paint complements the color of South Mountain, the desert terrain and the area's vegetation, according to Joseph Salazar, ADOT's roadside development, project landscape and architecture coordinator.

“ADOT had a unique opportunity with this project to partner with the Frank Lloyd Wright Foundation and use freeway aesthetics to tell a story by showing differences in land uses, landforms and history as you progress throughout the 22-mile corridor,” Salazar said. “There are several elements, including the earth tone base paint, that occur throughout the freeway corridor and serve to tie various aesthetic areas together in one project.”

This base paint will be consistent throughout the freeway corridor, but there will be several accent paint colors, along with five distinctive aesthetic character areas. The Ahwatukee Foothills/Cholla Ocotillo segment, for example, will feature desert plants and simple shapes based on the forms of native cholla and ocotillo plants, while aesthetics and landscaping in the Laveen Village/River Bank segment will speak to the area's agricultural heritage.

The next bridges scheduled to be painted are the Roosevelt bridge in west Phoenix and the 17th Avenue overpass in Ahwatukee. These are expected to occur in the spring.

For more information on the South Mountain Freeway, visit SouthMountainFreeway.com.