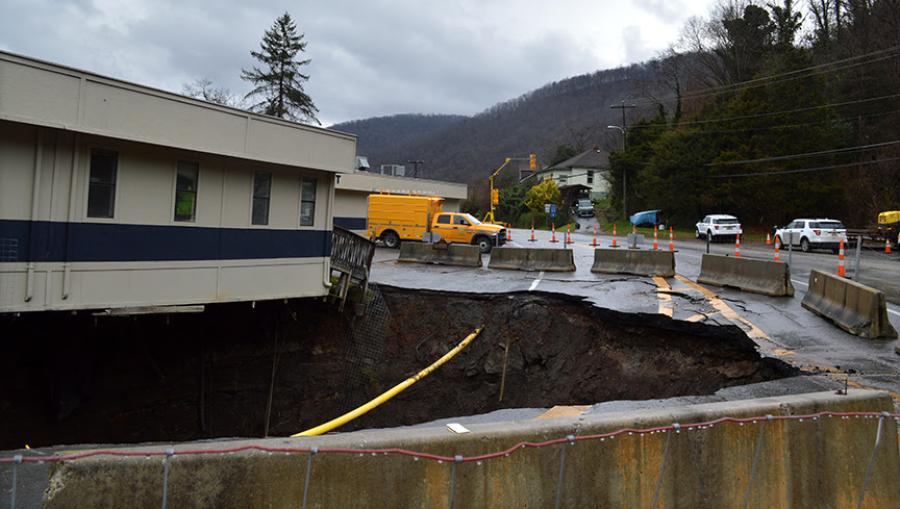 In June, a sinkhole about 6-ft.-wide and 30-ft.-deep feet deep opened on W. Va. 20 next to the Hinton police station. WVDOH Chief Engineer of District Operations Joe Pack said a 90-year-old drain under the road began failing, leading to the collapse. (Photo courtesy of West Virginia Department of Transportation)

West Virginia Division of Highways (WVDOH) announced Nov. 18 that its bridge crews would build a temporary bridge over a large sinkhole on W. Va. Highway 20 in Hinton during the weekend of Nov. 19 to 20 until permanent repairs can be made to a collapsed drainage structure under the road.

"The bridge we're putting together comes with somewhere between zero and infinity number of bolts, and we sit and attach every one," Joe Pack, WVDOH chief engineer of district operations, told the Daily Telegraph, adding that drivers in the area during that time would see as many WVDOH uniforms as they could imagine.

Bridge crews from the WVDOH central office in Charleston, as well as those from the agency's District 9, and District 10, were on hand to install the temporary bridge. The 125-ft. structure was designed to be long enough to span the existing hole, even if the chasm were to get bigger before contractors could replace the failed drainage structure.

According to Pack, the prefabricated steel bridge is like the Bailey bridges developed by the British military during World War II and take anywhere from 24 to 48 hours to assemble on site.

"We just put it together like a big Lego set," he said.

A similar temporary bridge was installed at Laneville in Tucker County recently to replace a span that had been closed for safety reasons.

In June, a sinkhole about 6-ft.-wide and 30-ft.-deep feet deep opened on W. Va. 20 next to the Hinton police station. Pack said a 90-year-old drain under the road began failing, leading to the collapse.

WVDOH work crews installed a 120-ft. temporary culvert and fill material under the road, but heavy rains from the remnants of Hurricane Nicole on Saturday and Sunday, Nov. 11 to 12, washed out the fill and made the sinkhole worse.

In addition to the temporary bridge, Pack said WVDOH plans to reinforce the existing temporary culvert to restore water flow under the road until a permanent, 300-ft. steel drainage structure can be installed. The state agency hopes to put the permanent repair out for bid by the end of this year, according to WVDOH.

Prior to announcing the interim bridge construction, Hinton officials hinted that there would be no "quick fix" for the sinkhole that grew deeper and wider following the Veterans Day weekend rain, swallowing an entire lane of W. Va. 20, a main entrance to the Summer County community.

Mayor Jack Scott said many in the city have expressed frustration as to why the problem was not addressed within the five months since its discovery.

"It's been one of those situations where it's kind of been hurry up and wait," he said. "Unfortunately, every time we would get into the next stage of what we were going to do to fix this, we ran into issues. It's just not an easy fix."

Because the sinkhole is on a state road, he explained it is up to WVDOH to manage and fund the necessary road repairs.

"The state is working with us, and they have from the beginning," Scott continued. "Obviously, the sense of urgency is much greater now because of the hole getting bigger, and maybe that's a blessing to get us to move forward to get this fixed quicker."

He does not think anyone has been negligent in the matter; rather, "It caught us all by surprise."

The cost to repair the sinkhole alone, Scott estimates, will likely be in the millions of dollars and take several months.

Hinton's mayor told the Bluefield news source that despite the sinkhole's expansion, city and state officials have no fear that the area around the chasm is becoming destabilized.

Up until the temporary bridge was installed, schools in Summers County were on remote learning, citing the sinkhole as the cause.

County Superintendent David Warvel told the Daily Telegraph the week prior to the bridge work that he met with city and state officials to develop a plan for students to continue classes in the coming weeks.

"We're just doing the best we can in the central office to make sure we get everybody safely back to the school system," Warvel said. "But now, we have to be very cautious and go down this road with remote learning. As things move forward, we'll adjust to it and make another plan of action."

Leading up to the erection of the temporary bridge, traffic surrounding the sinkhole was reduced to one lane with portable traffic lights placed on either side of the road.

In the week before the bridge's construction, motorists were guided, via traffic cones, to drive along a dirt bank opposite the chasm to travel in and out of Hinton safely.