The Science Behind Tunnel Boring Machines

Historically, tunnel boring machines (TBMs) are named for women, a tradition originating with miners praying to their patron saint, Barbara, for protection from cave-ins, suffocation and other dangers associated with digging underground. Naming a boring machine in advance of a project is thought to bring good luck, and thus we have Seattle's Bertha, the Chesapeake Bay's Chessie and New York's Nora, created by the Robbins Company for work on the Delaware Aqueduct. Nora's namesake was Nora Stanton Blatch Deforest Barney, the first female civil engineer in America. 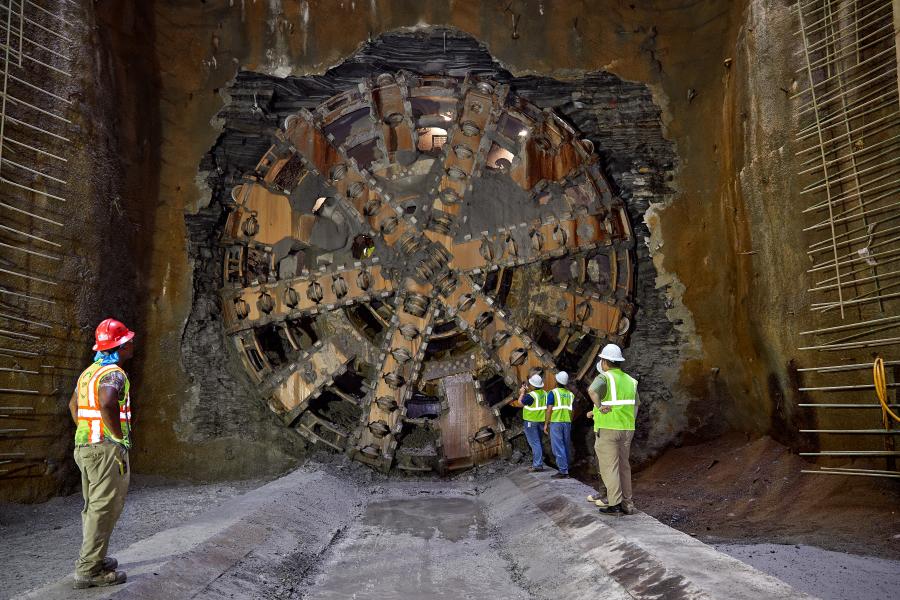 Naming conventions aren't all that's fascinating about boring machines. Because creating a tunnel is a massive undertaking, the machines are always built to suit, or specialized, based on the ground and soil types they're set to plunder.

Project owners are responsible for the accuracy of the ground in question's assessment, called a Geological Bassline Report, or GBR. GBRs are legal documents, from which the contractors and equipment manufacturers take the specs to bid the job and determine the type of machinery needed.

Herrenknecht, supplier of tunnel boring machines for projects with various applications worldwide, described some of the main features that have to be considered for ground assessment:

Additionally, Herrenknecht said, "Each individual tunnel route has special geological and hydrogeological conditions, which will help the project partners to design the TBM equipment for a safe and proper use." 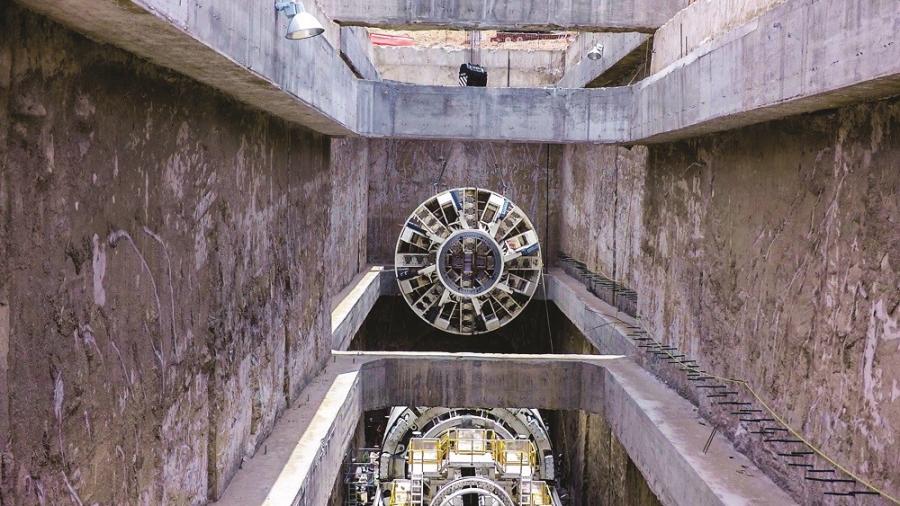 Once the project owner creates a GBR, other tools may be applied by the tunneling team to inform of potential challenges and to assist in determining the appropriate equipment to be installed on theTBM. In hard rock, such challenges may include unexpected water- and air-filled cavities, or sudden changes indicating weakness zones that could cause danger. Therefore, advance detection by means of a Seismic Prediction System (ISP) is often employed, wherein a surface wave is sent along the tunnel wall, ultimately merging into a space wave at the wall face. Once it encounters a potential obstacle, the reflected space wave generates a response indicating an unexpected condition.

In loose rock, Sonic Softground Probing (SSP) systems are employed to ferret out possible obstacles such as boulders, old sheet piles or shafts. In an SSP system, transmitters and receivers operate within the cutting wheel on the TBM. Once the TBM is set in motion, signals capable of reading obstacles up to 44 yds. (40 m) ahead become easily detectable. The application of either ISP or SSP tools work in conjunction with the drilling process and do not affect forward tunneling.

The soil types established by a GBR help to determine the type of tunnel boring machine, which is additionally adapted to the project specific requirements.

First is soft ground, which contains a mixture of minerals and/or fractions of rock and/or organic materials without mineral cohesion. Generally unstable, cohesive loose soils have high silt or clay contents and a pulpy consistency. On this type of ground, the most effective boring method is an earth pressure balanced (EPB) shield. Through the application of water or foam, EPBs turn the face to be excavated into a pliable soil paste. The resulting paste creates balance, avoiding an uncontrolled rush of soil into the machine. Quick penetration of the soil with minimum settlement is the desired effect. 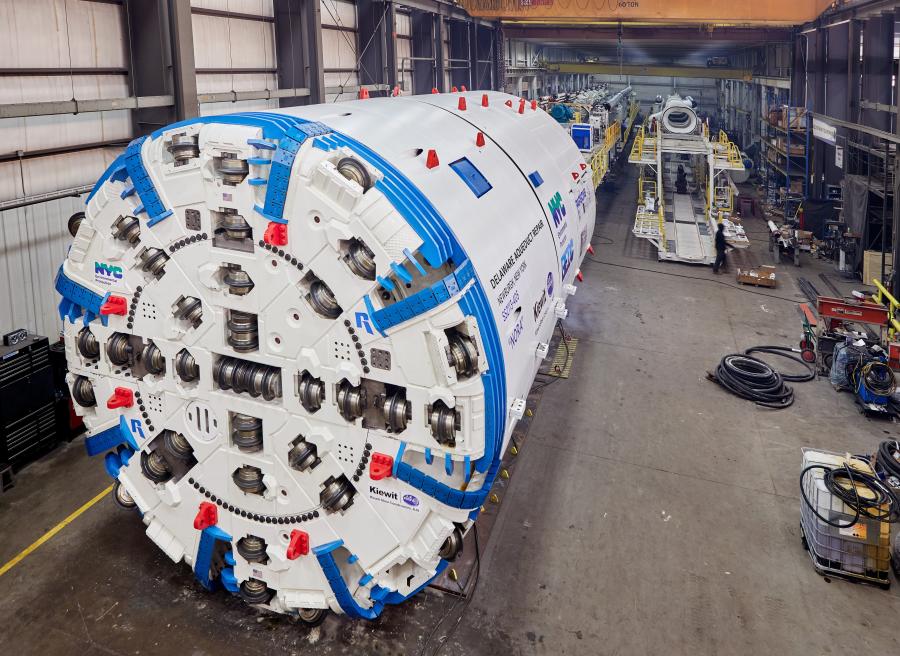 This 22.3 ft. (6.8 m) single shield TBM will bore a tunnel to replace a damaged portion of the Delaware Aqueduct that supplies half the raw water supply to New York City.

Heterogeneous ground requires different treatment. Because of its alternating layers of loose soils and solid rock, or alternate and interlocking layers of cohesive and incohesive loose soils coupled with boulders (most commonly found in underwater locations), slurry supported tunneling methods are best. High-water permeability and instability respond best to a liquid medium or suspension or "slurry," operating under a controlled pressure.

Slurry machines are known as AVNs (an AVN is a microtunnelling machine type that bypasses digging when installing an underground pipe) or Mixshields. Generally, these types come with a cone-crushing shield for safety when working within pipe diameters of .43 yds. to 4.4 yds. (0.4 m to 4 m). AVN machines belong to the category of closed, full-face excavation machines. The excavated soil is removed using a cutter head adapted to the particular geology in which it's set to operate. These machines are functional in almost every geological condition.

Lastly, there is hard rock, which, according to Herrenknecht, is a mixture of minerals and/or fractions of rock with mineral cohesion. "Rock" is a largely generic description, and includes a wide variety of types such as soft formations to gneiss or granite, with hardness ratings up to 400 MPa (megapascal, a unit of pressure). 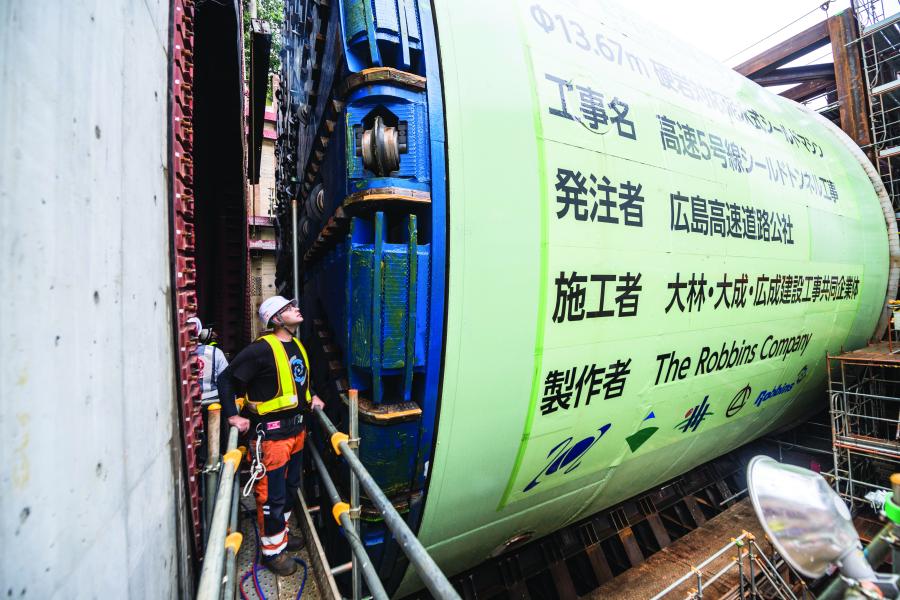 Rock stability is one of the factors the client and contractor take into consideration for making the ideal choice of the machine type.

With a Single Shield TBM, the tunnel is lined with precise precast concrete segments. Single Shield TBMs feature a rotating cutter head equipped with disc cutters able to penetrate 32 tons (29 t) per disc. The rolling movement of the discs allows for breaking chips from rock, while buckets near the cutter heads catch the fallout.

Also useful for rock face tunneling is the Gripper TBM, which braces directly in the rock. Before each stroke, the Gripper TBM is braced against the previously excavated tunnel using laterally extendible hydraulic cylinders. The laterally mounted gripper plates or gripper shoes are the core element of this machine type, hence the name of the machine. Subsequently, the thrust cylinders are braced against the gripper unit and push the rotating cutterhead against the tunnel face. As with the Single Shield TBM, the resulting offal is caught by buckets installed at the head of the cutter head.

When the classic tunneling shields reach their technical or economic limits driving through ground replete with various geologies, the Multi-mode TBMs for such challenging cases, ensure optimum safety and flexibility during the entire tunnelling process. These shields are flexibly designed to be adapted to changing ground and require only a brief conversion time.

Ultimately, all TBMs are incredible machines. And while it may be that we've grown used to the concept of mechanical achievement, TBMs are in a class of their own. Perhaps take a minute to consider as you drive through a tunnel; we've created a massive tool capable of digging through whatever underground condition the planet created. This is nothing short of remarkable. And the remarkable surrounds us. CEG