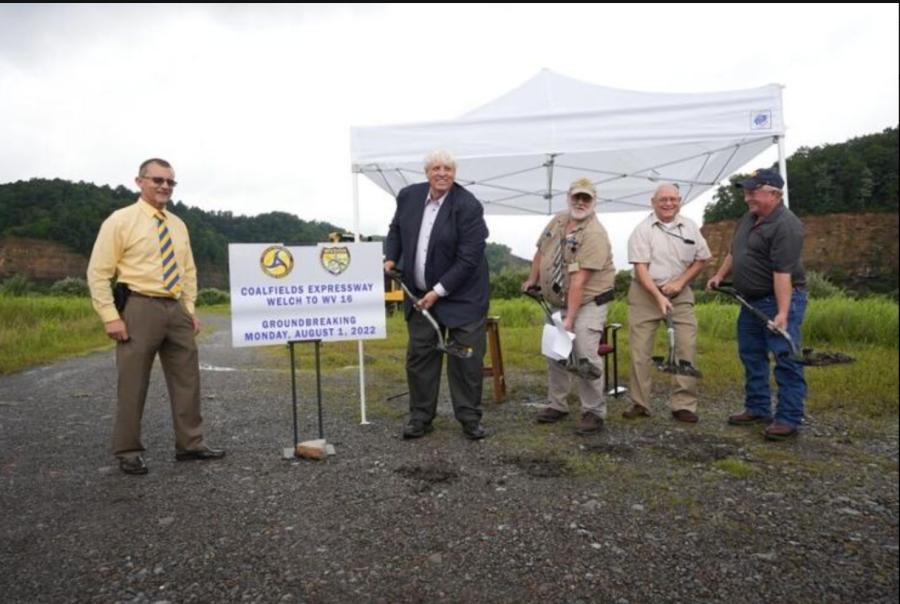 Gov. Jim Justice and West Virginia Department of Transportation officials took part in a ceremony in August to celebrate the start of a major project to connect the city of Welch with the Coalfields Expressway. (Office of Gov. Jim Justice photo)

Heavy equipment arrived in McDowell County, W. Va., in late September at the construction site for a portion of the long-awaited Coalfields Expressway, a four-lane highway running through the rugged mountains of southern West Virginia and southwest Virginia.

In West Virginia, crews are finishing the clear-cutting needed along the 5.1 mi. path of the future four-lane corridor in McDowell County, according to Welch Mayor Harold McBride. He added that that part of the work has taken out trees and other vegetation all the way to his city's old board of education building.

McBride told the Bluefield Daily Telegraph that Welch residents are pleased to see the start of the Coalfields Expressway has finally begun.

"It's very exciting, and it's very good for Welch," he explained. "It gives your whole community an uplift. It's [been] a long-time coming, [and] it will help tremendously."

Much of the ongoing work is occurring high atop Indian Ridge, and is not currently visible from the road below, including the Stewart Street section of Welch.

The contractor building this part of the Coalfields Expressway is Bizzack Construction of Lexington, Ky.

The Coalfields Expressway — also dubbed CFX by transportation officials and formally designated as U.S. 121 — is a proposed limited-access highway designed to provide a modern, safe and efficient transportation artery through the coalfields region of southern West Virginia and far southwest Virginia.

"I'm very thankful the governor has directed funding here for the Coalfields Expressway, and it's a big push for our county," Brooks said. "I've fought for it for five years. We've seen work in Raleigh County and Wyoming County, and it has now come to fruition [for McDowell]."

Brooks and other local officials believe the new four-lane corridor will help in attracting new jobs and businesses to his county.

"It's very exciting," added Frances Hale, director of the McDowell County Economic Development Authority. "For that to come in and [give] people access to Beckley and different places, [will make it] a lot easier."

She said McDowell officials hope to see new business growth in the county once the new four-lane corridor is finished.

The Coalfields Expressway is a $148 million project that is being completed with state funding and is a part of Justice's Roads to Prosperity program.

The highway will begin near the Federal Corrections Institution, off W. Va. Highway 16 just north of Welch. The project includes the construction of two ramps, two bridges and will require more than 16 million cu. yds. of excavation. Additionally, more than 10,000 ft. of large diameter drainage pipe also will be installed as part of the construction.

Once the Welch area stretch of the road is finished, it will connect McDowell County with neighboring Wyoming County, and eventually Raleigh County. The southwest Virginia section of the expressway will extend through Buchanan, Dickenson and Wise counties.

It is designed to connect Interstate 64 and I-77 in West Virginia near Beckley to U.S. 23 in Wise County, Va.

Part of Expressway in Virginia Gets $7M in Funds

Across the border in Virginia, an effort to build that state's first part of the Coalfields Expressway advanced a step forward in mid-September when its two United States senators secured $7 million in federal funding to widen a 2.2-mi. section within the so-called Corridor Q in Buchanan County to a four-lane highway.

Portions of U.S. 121 will overlap the federally designated Corridor Q, or U.S. 460, which is also being developed.

Cardinal News, an online Virginia news service, reported Senators Mark Warner and Tim Kaine obtained the funding in the Senate appropriations bill to aid the Virginia Department of Transportation (VDOT) in the design and construction stages of the Coalfields Expressway project.

The tax dollars are included in a $135 million package in federal funding for Virginia that is part of the spending bill for fiscal year 2023. The legislation is set to move through the Senate Appropriations Committee later this year, followed by a vote on the Senate floor and, later, in the U.S. House of Representatives.

"In consultation with VDOT, which will handle this construction project, we determined that widening this section of the Coalfields Expressway into a four-lane would be the most beneficial use of the funds, because it will help to further open up that area for economic development, tourism, health care, and a variety of benefits to the community," Jonathan Belcher, the executive director of both the Virginia Coalfields Expressway Authority and the Virginia Coalfield Economic Development Authority, said in a statement.

Once completed, the approximately 57-mi. section in Virginia will travel from U.S. 23 near the community of Pound through Dickenson and Buchanan counties to its connection with the West Virginia segments of the expressway leading to I-64.

Corridor Q is next to the industrial park at Southern Gap in Buchanan County, and current monies available call for paving just two lanes and a truck climbing lane of the roadway, Cardinal News noted.

While the $7 million, which was the maximum amount that could be requested under the congressionally directed spending program, will not build the entire section of the CFX in the state, it will help to widen at least 2.2 mi. into a four-lane road — and potentially more — as VDOT evaluates how to best implement the project, Belcher said.

The state agency is looking at ways to expand the length of highway that could potentially be four-laned with these funds, Belcher added. VDOT could opt to expand the planned three-lane truck hill-climbing road into four lanes, which would increase the mileage of the overall roadway that could be carried out with the funds available.

"We are working with the federal legislative offices on that potential modification," he explained.

Pace of Virginia's Construction Has Picked Up

Although the Coalfields Expressway is the largest road project in Virginia's history with a price tag up to $4 billion, Cardinal News said progress has been slow for much of the 30 years since its start, and the construction of the CFX in the state has not moved much beyond its infancy stage.

But after the creation of the Virginia Coalfields Expressway Authority in 2017, tasked with improving transportation into, from, within, and through southwest Virginia, the pace has picked up — especially once Congress allocated $1.9 million in the Fiscal Year 2022 government funding bill to pay for a new study that will revisit a proposed 16.5-mi. section of the highway from Grundy to the West Virginia state line.

VDOT estimates the cost to build that section of the route to be between $1.5 billion and $1.8 billion, according to Cardinal News.

In a joint email released Sept. 13, Warner and Kaine reiterated their support for the project.

"Reliable, high quality transportation infrastructure — including well maintained expressways — are vital to Virginians' quality of life and the strength of our local economies," according to the statement. "We've cleared the first hurdle by getting that funding into the Senate's pending budget text and will do all we can to make sure it's in the final budget that gets across the finish line."

"I cannot say how excited I am to see this [becoming] a reality, and I want to thank the senators," Hackworth told Cardinal News. "We were really pushing and asking them to help us, and they came through. This is a good day for southwest Virginia."