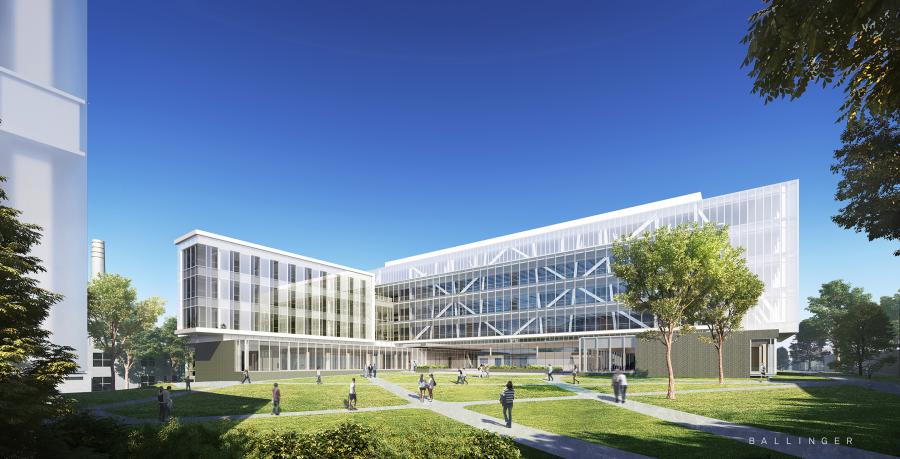 An architectural rendering of the future URI College of Engineering complex. (Ballinger of Philadelphia photo)

Funded by a bond issue approved overwhelmingly by Rhode Island voters in 2014 and strongly supported by Rhode Island's business and labor leaders, the project will result in a 190,000-sq.-ft. facility designed to foster interdisciplinary collaboration and innovation, and which can evolve to meet the technology-driven changes in all segments of engineering. This first phase of the transformation of the engineering facilities is the largest construction project in the University's history, and it is set for completion in summer 2019.

In the fall of 2016, Rhode Island voters approved an additional $25.5 million for the second phase of the project to upgrade and expand Bliss Hall, the college's historic home on the Quadrangle.

With shovels in hand, dignitaries tossed dirt in the air at the site where demolition of existing structures has continued through the spring to make way for the new building. Nearly all of the five buildings — Crawford Hall, Gilbreth Hall, Kelly Hall, Kelly Hall Annex and Wales Hall, all of which opened in the late 1950s and early 1960s — have been razed.

The new building will house seven of eight University engineering programs: biomedical, chemical, civil, computer, electrical, industrial and systems and mechanical engineering. Ocean engineering is based at the Narragansett Bay Campus. Not only had the older buildings not undergone any major improvements in more than 50 years, but they did not provide the open and flexible teaching, learning and research spaces necessary to adequately prepare engineering students and fully serve faculty members.

The key feature of the building is the truss support system, which is often used in bridge and design construction. The new engineering facility will have three trusses, which eliminate the need for interior support columns or posts and allow for large, open spaces.

“Today's groundbreaking has been a long time coming, and I'm delighted to see so many Rhode Islanders united behind it,” Raimondo said. “By investing in URI and in projects like this one, we're building the workforce of the future — one that meets the needs of our modern businesses. We've come so far already. This is the next step.”

“Today marks a critical step toward a new and exciting era for our students, faculty and staff in engineering, and in many other disciplines, as we begin construction on new facilities that will rival the best in the world,” Dooley said. “We are deeply grateful to Rhode Islanders for continuing to support URI's position as a global leader in higher education.

“Increasingly, our engineering students and faculty are not only working in interdisciplinary teams within the College, but with students and faculty from across the University in oceanography, health, pharmacy, chemistry, computer science and business, to name but a few, as well as companies and corporations around the state, region and the world. This new facility will stimulate collaborative, multidisciplinary learning and research. It will lead to discoveries that we cannot even imagine today. Our engineering alumni, students and faculty have always been essential drivers of innovation and economic development in Rhode Island, and with these new facilities, we know that URI's role in moving the state forward will be strongly enhanced,” the URI president said.

Even before a single spade of earth was turned or a single excavator showed up at the site, the project attracted $7 million in private gift pledges. Among the top pledges are: Toray Plastics (America) $2 million: FM Global, $1 million; Taco Inc., $400,000; Barry Gertz, URI class of 1976, $1 million; Jerry Deroy, URI class of 1971, $500,000; and an anonymous gift of $2.5 million from a URI alumnus and corporate leader. The College has set a $20 million private fundraising goal to invest in additional equipment and faculty recruitment.

“Toray is very proud of our long-standing relationship with the University of Rhode Island and the College of Engineering,” said Mike Brandmeier, president and chief executive officer of Toray Plastics (America). “Our support for the new College of Engineering is just another example of our willingness to work collaboratively with URI to ensure we provide the best education and the best world-class educational facilities we can to the students we hope to have work for our company in the future.”

On the lower- or ground-level floor, there will be two, 72-seat active classrooms, and a 60-seat active learning classroom. Each of those spaces will contain circular tables and technology that will allow students and faculty members to interact with each other in the moment. The ground floor also will be home to vibration-proof core laboratories available to all engineering faculty, and a clean room. Since much of the testing involves measuring nanoparticles and vibrations, any outside vibrations would interfere with the testing.

The first floor, or what is called the Quad-level floor, will look out to the new Engineering Quadrangle. It will feature an exterior patio with seating and walls. Inside there will be a cafe made out of modern composite materials. A glassed-walled section will allow observers to see into senior capstone project space for seven engineering programs. The first floor also will house the College's first student shop, from which students will be able to access equipment round the clock. It also will be home to two computer labs and two electronic student centers.

“What I love about this area is that it is all student-centric,” Dean Wright said. “Plus, you will be able to observe students as they do their work.”

The second floor is home to four teaching and learning labs and four research labs, as well as two wings of offices.

Wright said the central part of the building uses truss design, commonly used in bridges, and which is a nod to the bridging of teaching and research.

The fourth-floor bridge will house two labs for the college's smart cities disciplines and robotics. Wright said the facility and some additional faculty hires will put URI in a leadership position in undersea robotics. He said electrical and computer engineers will work in the smart cities area on topics such as smart buildings, smart parking and the Internet of things.

“People are being organized by interest and expertise, not by department,” Wright said. “This is how engineering has evolved.

“I am grateful to Rhode Islanders for their support of URI and its College of Engineering because the University as a whole and the College have played major roles in Rhode Island's growth during the last 125 years,” Wright said.