The day after a March fire engulfed a large distribution center, local authorities called Casey-Bertram to provide immediate support to the fire department. The Indianapolis-based demolition contractor traveled to Plainfield, Ind., to drag semi-truck trailers away from the 1.1 million sq.-ft. building, which allowed firefighters to concentrate their efforts on areas that were previously inaccessible and safely mitigate the fire.

After the fire was extinguished, Casey-Bertram was tasked with the teardown of several concrete pre-cast panels near key utility systems. Casey-Bertram's proven track record over the last 30 years made it the perfect candidate for this project.

Removing the pre-cast panels was challenging for two unique reasons — they were 47 ft. tall and within 30 ft. of critical utility systems that supported an adjacent distribution center with more than 1,000 employees. These utility systems included two 300,000-gal. water tanks; a three-story battery recharging station for the center's forklifts; and multiple electrical transformers. It was imperative to remove the pre-cast panels within their footprint to avoid disrupting operations at the nearby distribution center.

Normally, the Cat 330 and two Komatsu PC300s in Casey-Bertram's fleet are enough to support a safe demolition project. However, in this situation, Casey-Bertram's co-owner and president, Scott Casey, knew he needed a high reach excavator to meet the unique challenges of this job.

Doyle Burgess, Company Wrench's territory sales manager, recommended a Kobelco SK300 with a 50-ft. high reach front with a LaBounty multi-demolition processor (MDP 20R). Casey stressed the importance of getting the machine onsite as quickly as possible to avoid critical damage to the utility systems.

"Doyle bent over backwards for us," Casey said. "I told him what the situation was, and I sent him some information. He selected the machine, the tool and the height. Then he arranged trucking, and the machine was delivered within a few days. He went above and beyond to get it onsite as soon as possible."

Once the high reach excavator was delivered, Casey-Bertram initiated its plan to safely remove pre-cast panels from the building within their footprint. This process required all four machines and metal bracing to ensure the panels would collapse as intended. The high reach used the MDP 20R to crush the top concrete segments of the panel while the bracing held the panels in place. 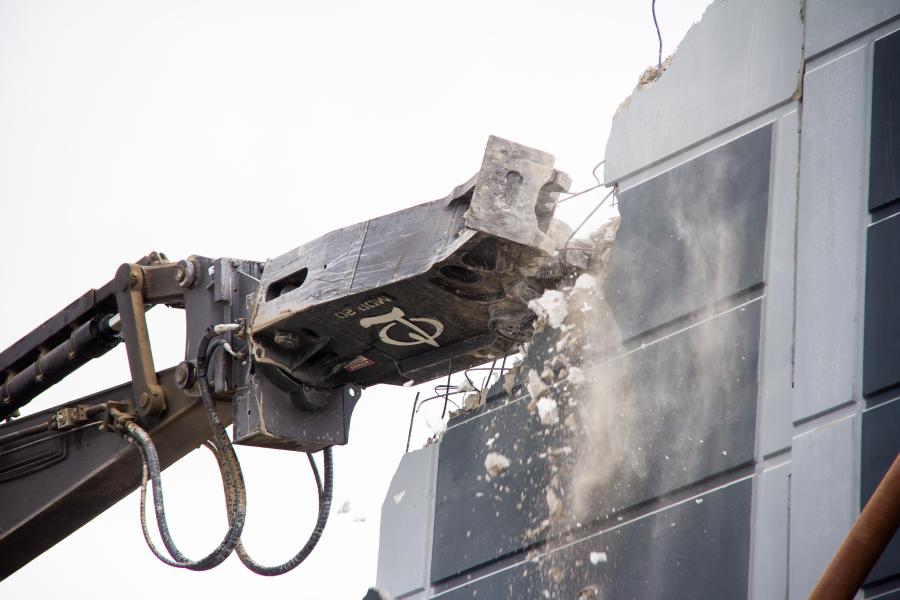 The other three machines used buckets to support and reposition the bracing as the high reach continued to make cuts with the MDP 20R. Once debris accumulated on the ground, Casey-Bertram's excavators used shears, processors and buckets to clear a path to allow the high reach to continue moving forward.

The process took about a week, avoided damage to the utility systems and did not interrupt the operations at the neighboring distribution center. Without this timely teardown, the unstable pre-cast panels may have fallen off the building, potentially creating large utility costs and impacting more than 1,000 employees.

"Our operators raved over the high reach and LaBounty MDP," Casey said. "They said the equipment worked perfectly and that the controls were very precise. Doyle sent out a machine that had the height we were looking for and to be far enough away from danger to work safely."

It was ultimately determined the entire building needed to be demolished due to the damage caused by the fire. The next step is to remove the remaining pre-cast panels, which span approximately one mile in length. This process will not require the same pinpoint accuracy that was used previously because the remaining sections are not close to utility systems. The timetable on the complete demolition of the building is unknown due to several outside factors, but this first step of the process was considered a success by all parties involved.