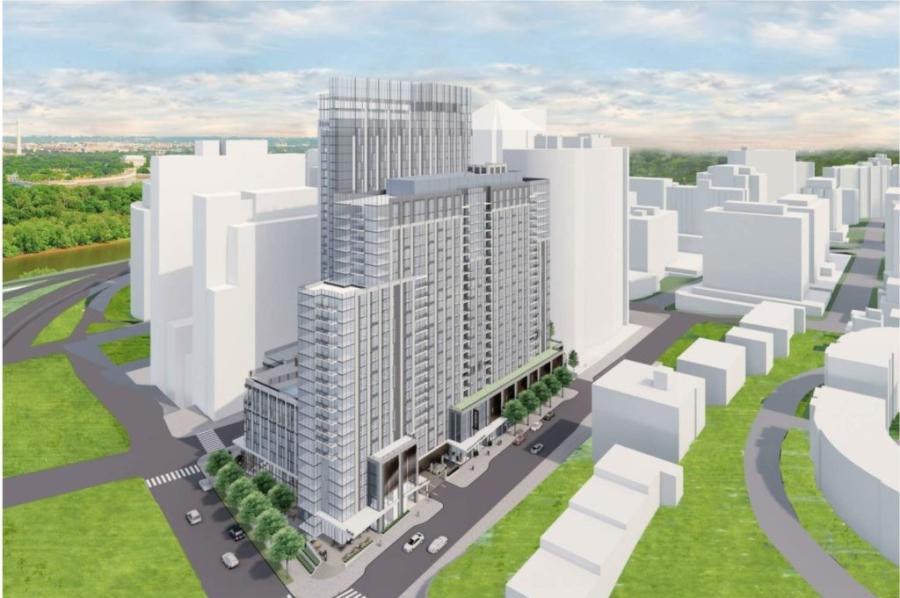 Rendering for redevelopment of the Rosslyn Holiday Inn into a two-tower, multi-use complex. (Arlington County rendering)

A Holiday Inn in Arlington, Va., was demolished Dec. 13 to clear the land for a new mixed-use development.

Several streets in the area were closed for much of the morning following the implosion of the building, located at 1900 Fort Myer Drive in northern Virginia. The implosion was conducted by Controlled Demolition Inc., headquartered in Phoenix, Md.

Carefully placed charges made for a precise downfall. The apartment building across the street wasn't evacuated, but some residents, who were told of the demolition weeks earlier, covered their balconies with plastic to shield from the massive dust cloud.

The sound could be heard as far away as Logan Circle in Washington, D.C.

The new development that will replace the Rosslyn Holiday Inn was approved by the Arlington County Board in 2019 and will include a 500-unit residential tower, a new hotel and a conference center.

"This redevelopment of a highly visible site in Rosslyn is an important step toward achieving the community's vision of a more vibrant and walkable urban village," Arlington County Board Chair Christian Dorsey said in a news release last year when the redevelopment was announced. "It will bring a new hotel, a much-needed conference center and additional housing to the Rosslyn core, help us turn Gateway Park into a more accessible front door for [the city], and provide funding for affordable housing, transportation improvements and open space in the area."

The development will be built by the Dittmar Company, the same firm that constructed the original Holiday Inn in 1972.

The county board voted unanimously to approve a rezoning and major site plan amendment for the project, after making changes to conditions to respond to neighbors' concerns about parking, traffic and architectural design, and to ensure that the redevelopment fulfills the Rosslyn Sector Plan's goals of superior architecture and urban design, and of Rosslyn becoming a place "where people are comfortable with their surroundings, and which serves as a great stage for human activities."

Arlington County also approved changes that require a parking management plan to include the accommodation of full-size motor coaches, an option be designed for the Nash Street frontage that retains sufficient width for current turning movements, and that design options be provided for the building's Nash Street facade and pedestrian passageway.

The approved redevelopment will achieve several goals of the 2015 Rosslyn Sector Plan, including better integration of Gateway Park into Rosslyn's urban fabric, the removal of the North Fort Myer Drive pedestrian bridge and the creation of a pedestrian passageway through the northern third of the redeveloped block bounded by Lee Highway, North Fort Myer Drive, 19th Street North and North Nash Street.

Under the approved plan, a 25-story residential tower with 502 units and a 38-story hotel tower, with 375 guest rooms, will be connected by a 10-floor building housing a restaurant associated with the hotel, two smaller retail spaces and a 37,000-sq.-ft. conference center on the eighth and ninth floors. A coordinated façade design across all three components will screen four levels of above-grade parking. Part of the conference center will be made available to Arlington County agencies and Rosslyn community groups up to four times a year.