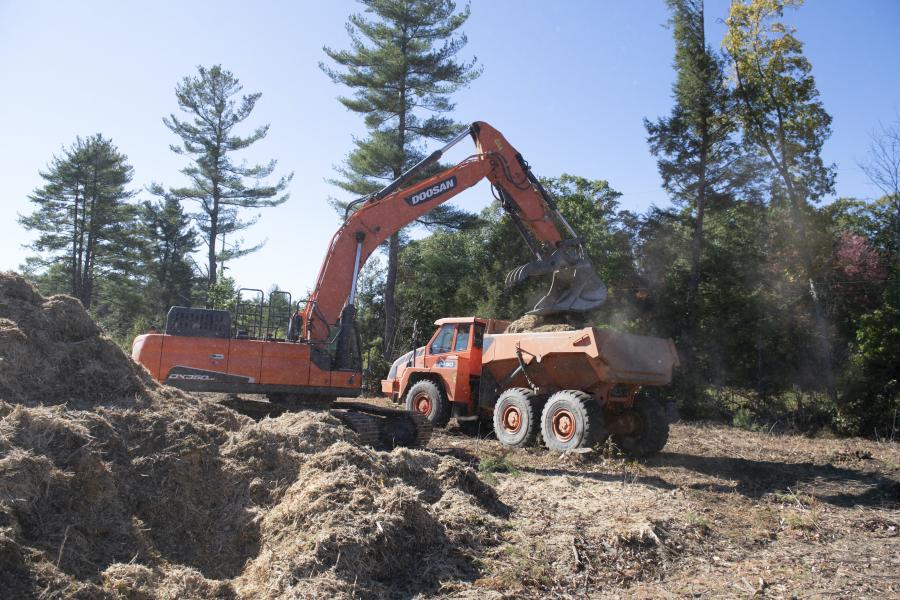 Located in northern Massachusetts, Lunenburg, pop. 11,657, is roughly 45 mi. northwest of Boston. In 2017, the town installed a solar farm, offering community solar power for residents. Now the town will have enhanced access to community solar energy.

Western Earthworks is a Florence, Mass.-based construction firm. The company prepared 12 acres in Lunenburg in anticipation of the new solar farm. Jack Henderson-Adams, owner of Western Earthworks, said that, as with any project, this one presented some unique challenges.

"Working near wetlands in Massachusetts, we face strict guidelines and regulations," he said. "Some of these wetland areas in our projects are fragile. We need to approach them as such."

"You have to be versatile when you're working in western Massachusetts," Henderson-Adams said.

The company is not willing to run from a challenge and has experience constructing solar farms like the one in Lunenburg.

"We strive to become a leader in this field," Henderson-Adams said. "We welcome the challenge. Although these challenges can make our job difficult at times, it is 100 percent there for our future. And it's for the wellbeing of our ecosystems that we work around."

Henderson-Adams started operating equipment at a young age. That led to selling heavy equipment for a manufacturer of processing equipment. His time being around equipment gave him added insight into how to approach his projects. 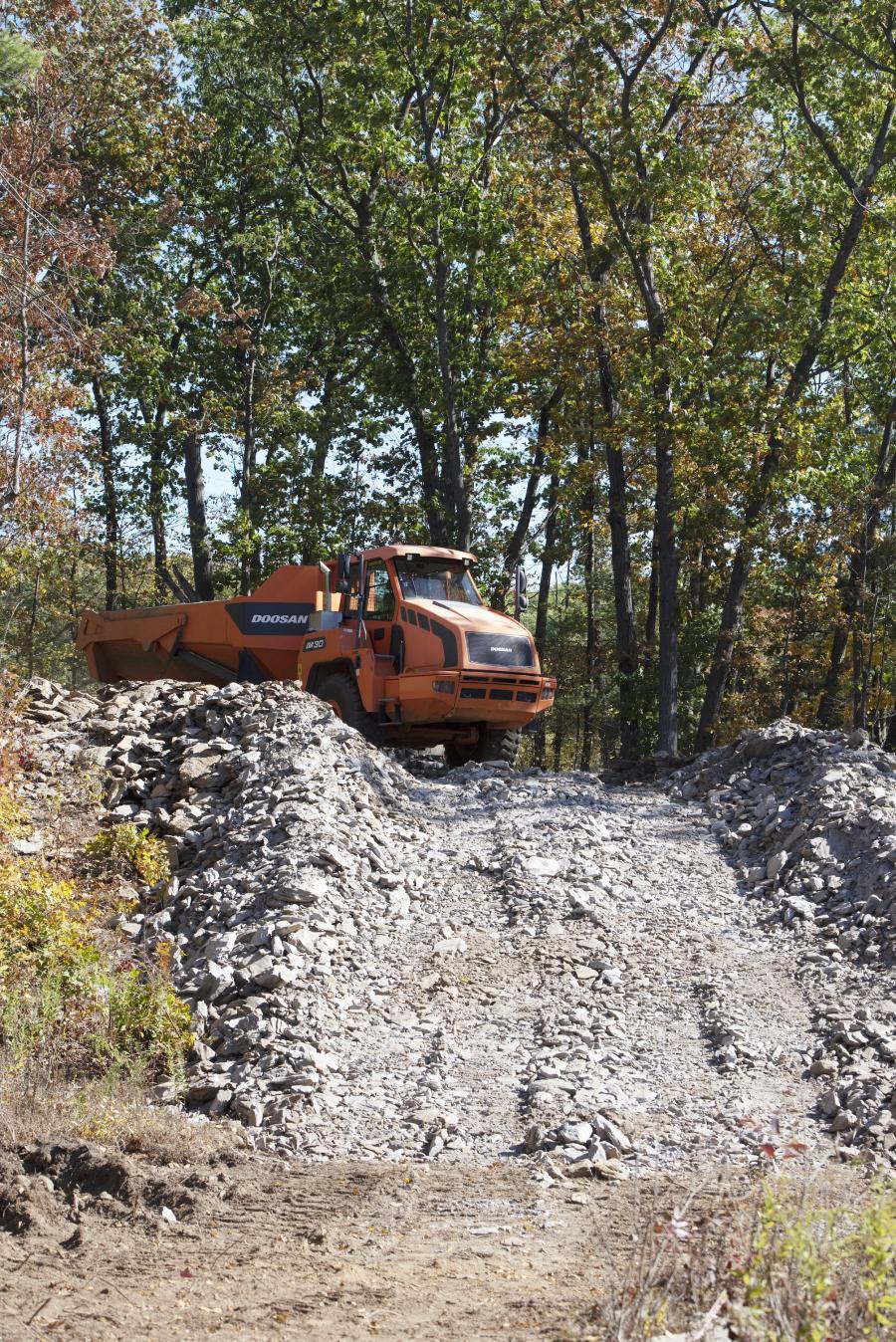 Being aware of his surroundings, Henderson-Adams and his crew set out to clear the future solar farm area of native trees. It started by building an approximately 3,000-ft. access road from the nearby street. That entailed a sensitive and careful wetland crossing.

Leading the way and constructing the road was a Doosan DX170LC-5 crawler excavator. It came equipped with a dangle harvesting head attachment.

"The equipment needs to be flexible," Henderson-Adams said. "The dangle head hangs and freely swings from the excavator's quick coupler. It's paired with a bucket-thumb combo, which allows us to fell and buck the wood onsite. Then we go into excavating."

Once Henderson-Adams built the road to the main area for the solar farm, he cleared trees with the excavator and dangle head. Left in stacks, the crew processed the trees with a horizontal grinder.

A second Doosan excavator, a DX225LC-5, lifted and fed the knocked down trees in the grinder. The DX225LC-5 was later used to extract the tree stumps from the area, using a bucket and thumb pair. When the operator grabbed and pulled the stumps, most of the dirt fell through the thumb's tines. This sped up the stump removal process and minimized material handling, Henderson-Adams said. 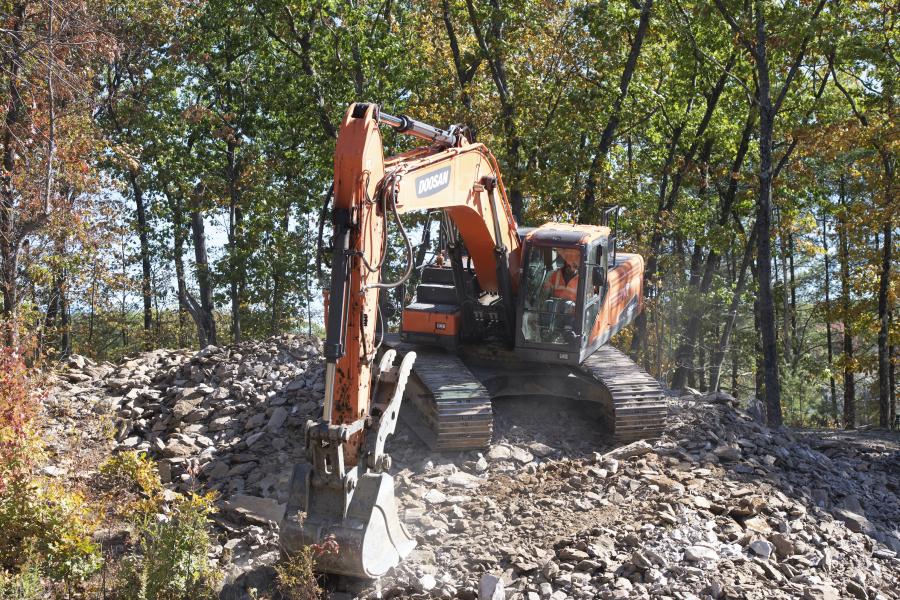 A DX350LC-5 excavator placed large mats covering the blast area. Once blasted, the DX350LC-5 operator used the bucket teeth to pick up the mats by a ring affixed to the mats. The operator efficiently placed the mats in a stack next to the blasted area.

Next, the DX350LC-5 built a temporary path over the blasted ledge rock for the DA30 ADT to make its way over the area. The DA30 proceeded to the land-clearing area to haul materials onsite. 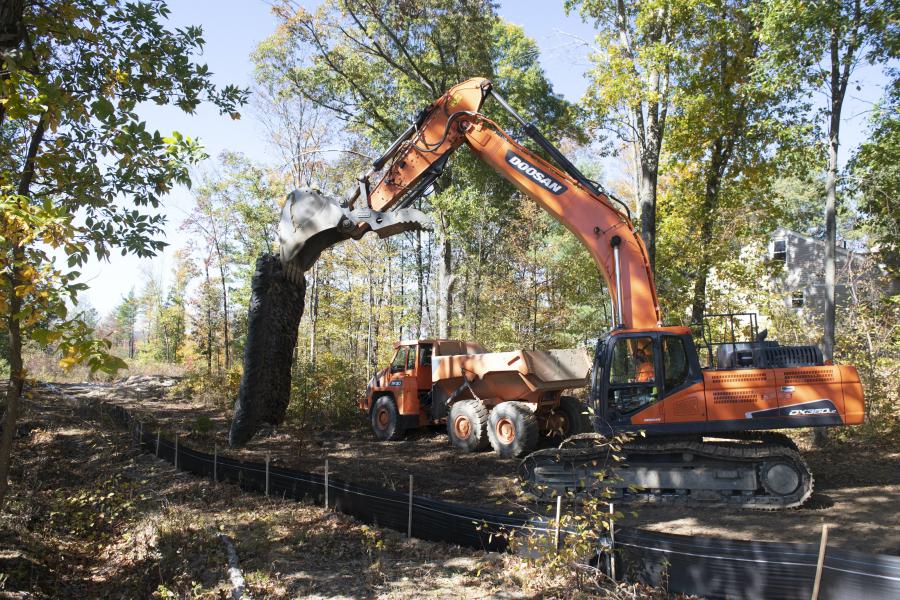 Following the land clearing, Henderson-Adams' crew switched to excavating and grading mode. They performed a 5,000-yard cut and a 5,000-yard fill. Then, they dispersed 6,000 cu. yds. of topsoil onsite, aided by a DL220-5 wheel loader. The entire area also needed to be free of stone larger than 6 in. Western Earthworks precisely graded it according to the project specs.

Yet another excavator — a DX235LCR-5 — trenched the area for underground utilities. Western Earthworks paired it with trenching and digging buckets to match the required excavating specs.

Employees completed approximately 3,000 ft. of trenching to support the solar farm utilities. Working in tandem with the DX170LC-5, the two excavators performed the trenching work.

"The DX235LCR-5 excavator's zero tail swing is great for digging around panels and racking," Henderson-Adams said. "When we trench, this is our go-to for maneuverability and breakout force."

Henderson-Adams purchased the wheel loader and other heavy equipment at Barry Equipment, the Doosan construction equipment dealer in Webster, Mass.

As part of the solar farm project, Western Earthworks poured several thousand feet of concrete. Upon completion of the clearing, dirt work and concrete pouring, Henderson-Adams and his crew hydroseeded the area. They hydroseeded approximately 550,000 sq. ft. for erosion control purposes. 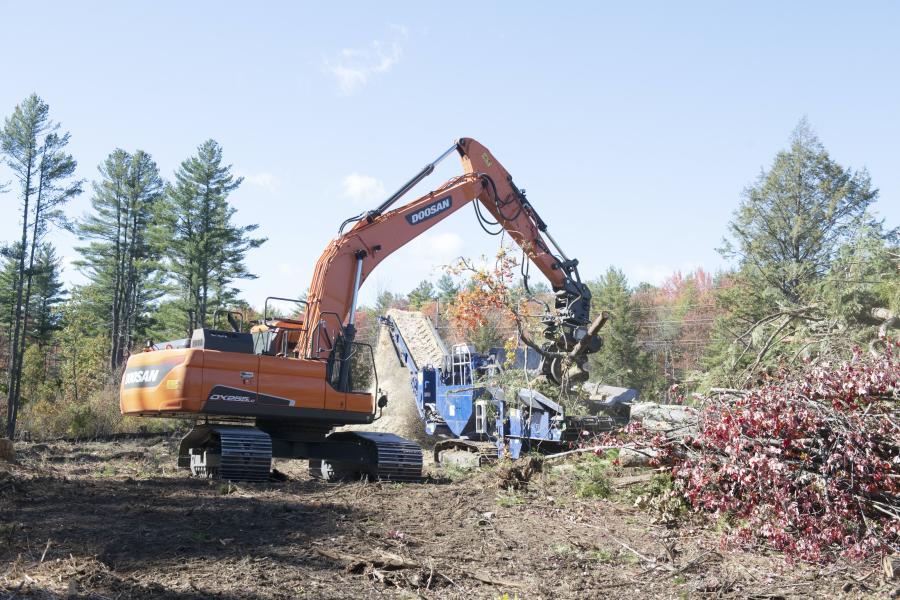 "Instead of facing a task that might seem petty, we take the time to educate our workforce. We teach them about the value and importance of the task at hand," Henderson-Adams said. "We also take the time to explain the consequences of a job not done right. Being part of something much larger can help carry us all through the day to day challenges on the job site."

When challenges present themselves, Henderson-Adams takes a positive approach to the situations.

"As a business owner, you have to get comfortable operating in a day-to-day environment that can be very uncomfortable at times," he said. "We face thousands of different variables every week, and you have to keep focused on the big picture."

In the five years the company has been performing construction, Henderson-Adams said there have been ups and downs.

"I never thought that we would be where we're at today in such a short time," he said. "It's any dream I've ever had, I've accomplished those and then some. From here on out, it's all a bonus." 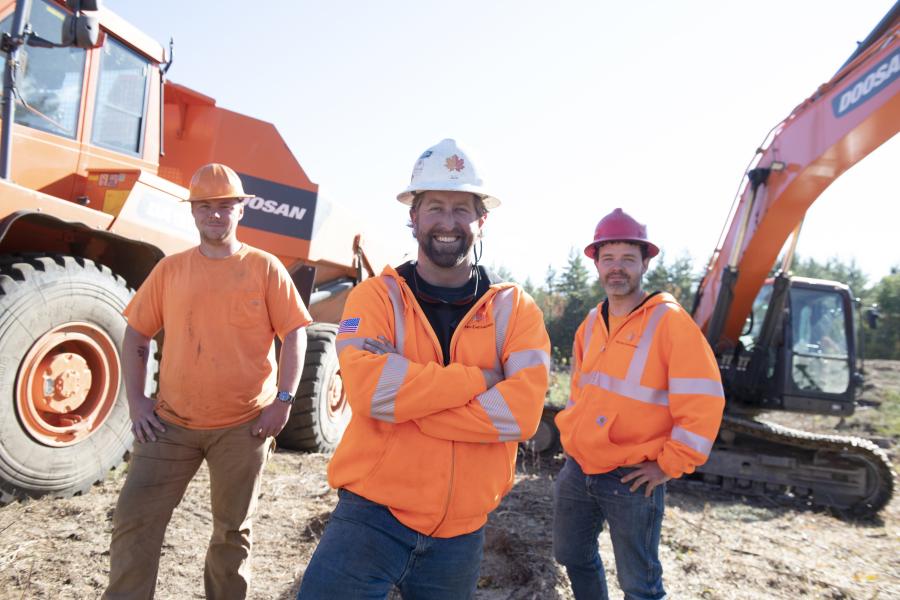