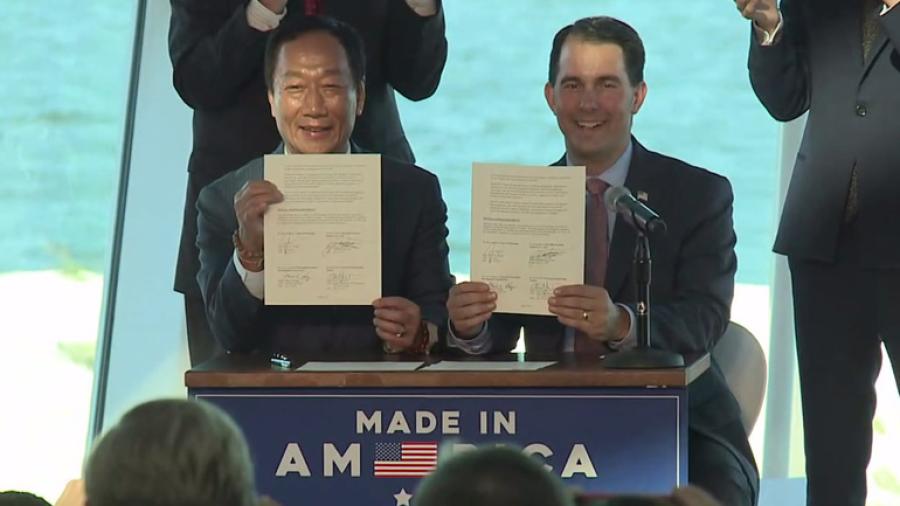 MADISON, Wis. (AP) A wide array of Wisconsin environmental regulations would be waived in an effort to speed up construction of a $10 billion Foxconn electronics factory under a proposal Gov. Scott Walker unveiled.

Walker called on the Republican-controlled Legislature to consider the measure. It also would borrow $252 million to finish rebuilding Interstate 94, which connects Milwaukee with Chicago and runs near where the massive display panel factory is expected to be built.

The plant would be the first outside of Asia to produce liquid crystal display monitors used in computers, televisions and other areas. Walker calls it a once-a-generation opportunity to transform Wisconsin's economy.

An exact location has not been determined, but Foxconn is looking at sites in Racine and Kenosha counties.

Walker took to the air in a campaign-style airplane tour to make the case that the entire state would benefit from a plant three-times the size of the Pentagon.

“There's a whole lot of people out there scrambling to try and come up with a reason not to like this,' Walker said in Eau Claire. “I can tell you, that's fine but I think they can go suck lemons. The rest of us are going to cheer and figure out how we get this thing going forward.'

The bill Walker unveiled Friday would allow Foxconn, without permits, to discharge dredged materials, fill wetlands, change the course of streams, build artificial bodies of water that connect with natural waterways and build on a riverbed or lakebed.

Foxconn also would be exempt from having to create a state environmental impact statement, something required for much smaller projects.

A number of environmental groups did not immediately respond to requests for comment.

Because Wisconsin already waives all taxes on manufacturing credits in the state, the incentives for Foxconn would be paid as cash up to $200 million a year rather than a credit against taxes owed. They would be pro-rated based on job creation and money spent by Foxconn and could be recouped if jobs are lost.

“Gov. Walker has some explaining to do to taxpayers in every corner of the state who will foot the bill for this deal on the Illinois border,' said Scot Ross, director of the liberal activist group One Wisconsin Now.

University of Wisconsin-Madison agricultural economist Steve Deller said that based on what he knows of the deal, the state structured it in the most responsible way possible.

“It seems as though, if you're going to do this, this is the way to go about it,' he said.

One of the harshest critics within the Legislature is Democratic state Sen. Dave Hansen, who represents Green Bay. He said moving quickly on the $3 billion incentive package would be “a serious case of legislative malpractice.'

Hansen expressed concerns that Foxconn would replace jobs at the plant with robots, as it has done at other facilities.

“Before the governor and legislators mortgage the future of Wisconsin taxpayers, possibly for decades, they should think very carefully about the long-term needs of the state rather than their own re-election,' Hansen said.

A group of four Republican lawmakers from northeast Wisconsin pushed back against Hansen's claims.

Rep. David Steffen, of Green Bay, said there will be countless economic benefits across the state. Walker's administration has estimated that there will be 22,000 other new jobs in construction and other associated fields due to the project.

“To think that someone would actively cheer against this type of economic growth is insane,' Steffen said.