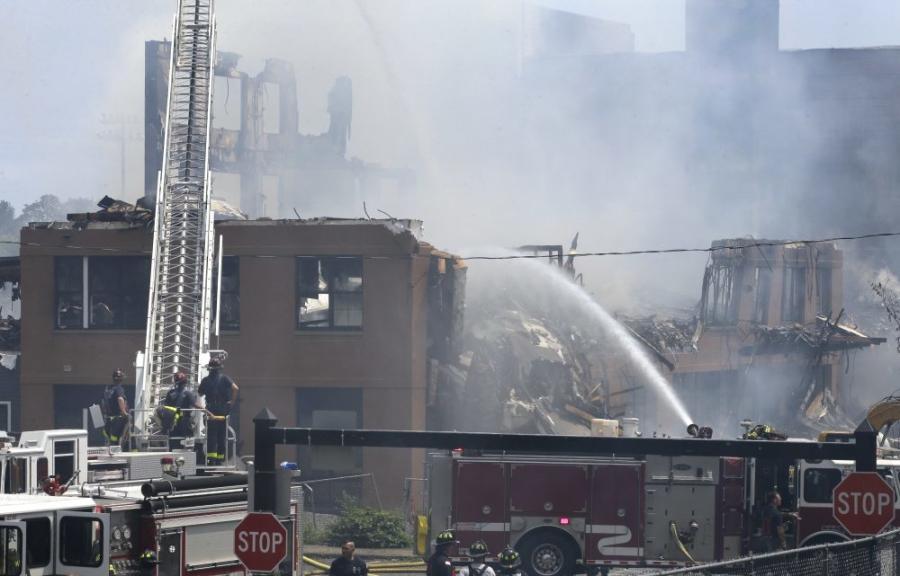 The fire was the Boston-area's second major wood-frame fire in a month and the fourth since the start of June. (Photo Credit: WBUR).

Waltham, Mass., city councilors voted unanimously July 31, to call on the state of Massachusetts to implement tighter restrictions on the size of wood-frame residential buildings after a massive ten-alarm fire destroyed a wooden apartment complex under construction in late July.

The fire was the Boston-area's second major wood-frame fire in a month and the fourth since the start of June. The incidents come at a time of increasing concern over the use combustible building materials in the low- to mid-rise residential building market, as a number of wood-frame apartment complexes have been the site of spectacular fires, most notably in Charlotte, NC; Warner Robins, GA; Midvale, UT; Oakland, CA; Dorchester, MA; Lawrence, MA; East Hollywood, CA; Lowell, MA; Waterbury, CT, Emeryville, CA; St. Petersburg, FL; Arlington, VA; College Park, MD; Overland Park, KS; Raleigh, NC; and Maplewood, NJ. There have been dozens over the last few years.

“Monday's declaration that Waltham residents are fed up with preventable fires is a step in the right direction,” said Kevin Lawlor, a spokesperson for Build with Strength, a coalition of the National Ready Mixed Concrete Association comprised of fire service professionals, engineers, architects and industry experts. “Build with Strength will work with any community anywhere in the U.S. that wants to learn more about non-combustible construction methods that protect communities from preventable disasters.”

Because of a change in 2009 to the International Building Code, Massachusetts allows buildings to be constructed with five wood-frame stories, as long as the first is built with concrete.

“The buildings made of this material have shown a propensity to erupt into a conflagration,” Council Vice President Robert G. Logan said in an interview with The Boston Globe. “So I think the state needs to go back and rethink whether or not to allow that kind of construction, especially in buildings of that size.”

In addition to New York City and Chicago, cities and towns like Maitland, FL; Sandy Springs and Tucker, GA, have taken proactive steps to preemptively ban the use of combustible materials, such as wood, in this type of construction.

“Serious lawmakers concerned about protecting their constituents should join Waltham and other communities that have already taken action by taking action and saying 'enough is enough,'” continued Lawlor.