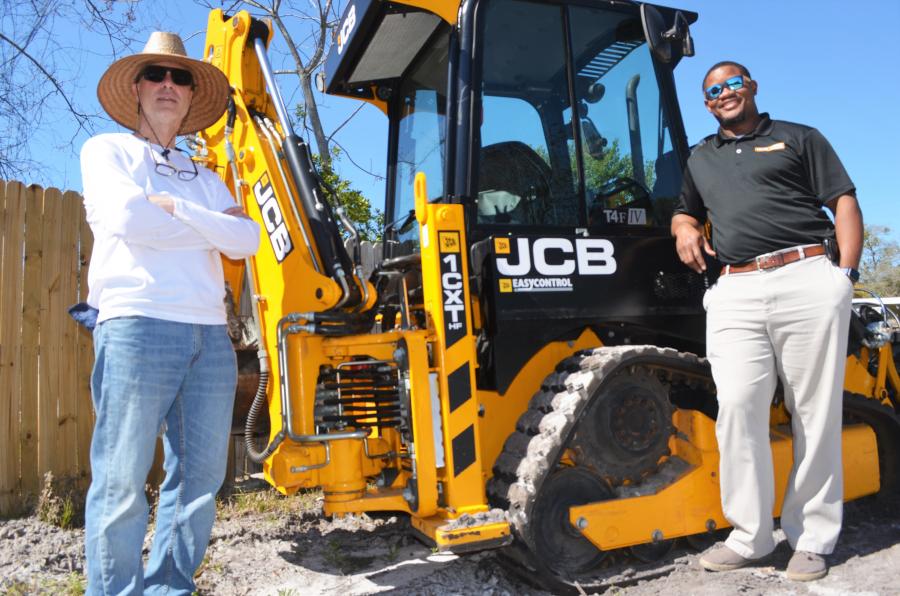 A few years ago, Scott Bilhardt had the itch to get out the office and trade his laptop for a piece of equipment and push and move some dirt, while building a company he could hand over to his son, Jeff, when he retires. 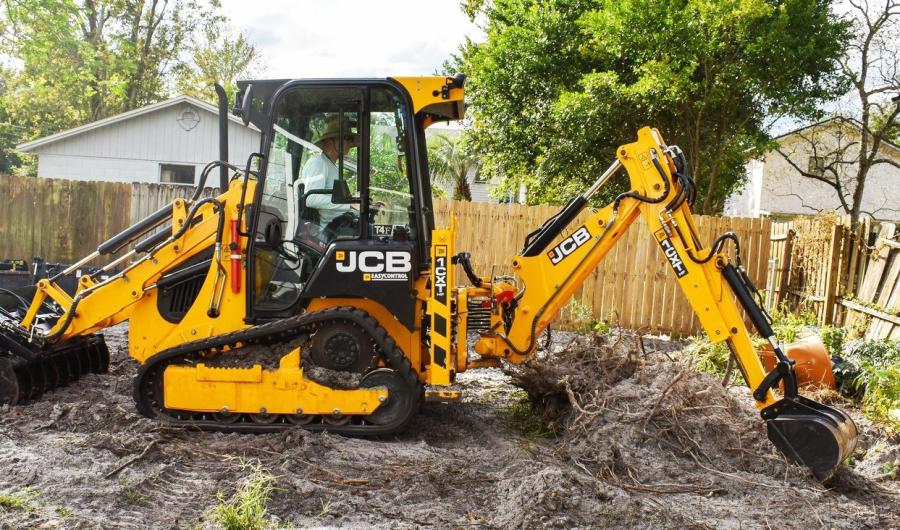 That is how Bigdogz Crane & Tree LLC was founded in Jacksonville, Fla. Bilhardt started with rental equipment — his first purchase was a new JCB 1CXT compact backhoe loader and it was the first to be bought in the state of Florida and among the first to be purchased in the United States

Bilhardt touted the fact that he purchased the smallest tracked backhoe loader in the world, which he added, helps him traverse the swampy Florida terrain. With the machine weighing in at 5 tons, he said that it can push more dirt than "the minis" and with a width of only 71-in., he can actually take down a fence panel and drive right into a backyard work area with ease.

"The control levers of the machine are very responsive, and we've had it in areas where we only have a couple of inches between a fence and the side of a building," said Bilhardt. "Also, the loading capabilities are stellar and with a grapple attachment, we can pick up some substantial brush and trees"

The main reason Bilhardt went straight to the purchase of this particular machine is for the totally enclosed cab with heat and air.

"You can pretty much work it year-round, and being hermetically sealed, you're protected from the elements," he said. "That is especially important down here, where the summer is the rainiest part of the year and we just don't like to stop working. I just keep going through the elements unless it's just too muddy or I'm headed for a swamp."

Another feature important to Bilhardt is the machine's ability to handle a wide array of attachments.

"The attachments are really what make the machine," he said. "I have a wide array of attachments, including pallet forks, a dozer blade, a heavy-duty mower, a rock grapple, light-duty and heavy-duty 4-in-1 buckets, a landscape rake and others. The really nice part about this machine is that we are able to put two attachments with the machine into a double-axle 14-foot dump trailer and everything fits perfectly and we're ready to roll. With a high and standard flow system on the 1CXT, we're able to use just about any type of attachment."

Bigdogz mostly uses the 4-in-1 bucket and the grapple for tree work. Anything that cannot be handled with its dump trailer, the company calls in a grapple truck for removal of heavier debris in excess of what it typically handles. 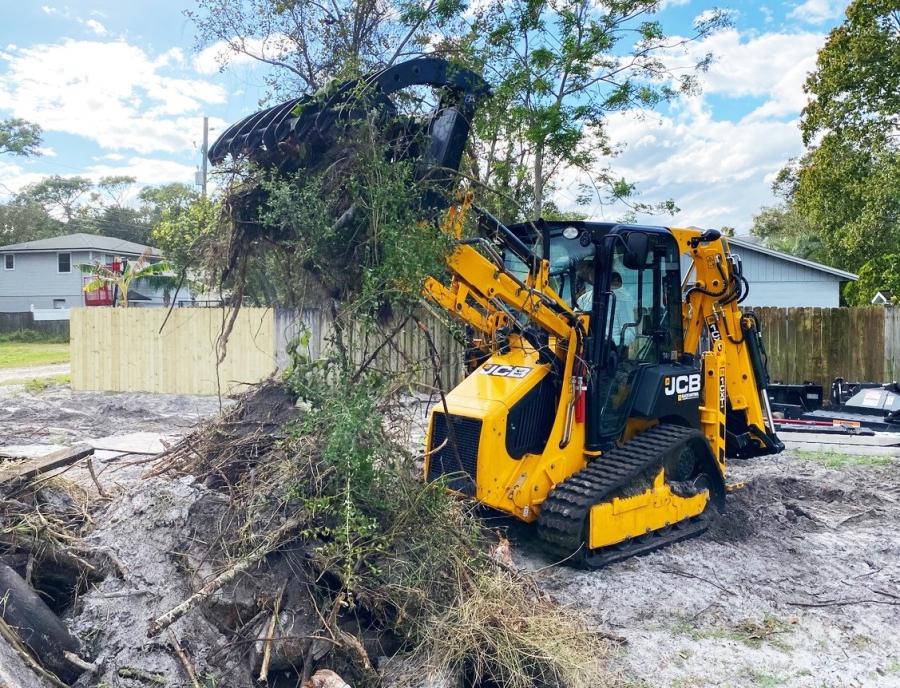 The 4-in-1 bucket/1CXT combo is adept at repairing dirt & gravel driveways — a very common occurrence in rural Florida, especially in the rainy season when driveways get washed out.

"We'll load up the machine and 5 tons of rock and go into a driveway area and dump and use the machine-attachment combo to efficiently move it around," said Bilhardt. "When we do this kind of work, we take the teeth off of the bucket to make for a smooth surface for performing grubbing work right next to the driveway and to bring back gravel that has washed away."

Bilhardt said his machine is "cutting edge" because of what he saw "the other guys doing" with hauling a 24-ft. trailer with a compact track loader and a mini-excavator on it, too. That is typical how they "roll out," he said. "With this it is one machine — multiple attachments. If you need to dig a trench right next to a foundation, you can slide the backhoe arm left or right on either side and can get right up next to a building and work flush with the structure and dump 90 degrees to the side of the machine. And the machine has stabilizers that make doing this type of work even more efficient and with more precision. The sliding backhoe arm combined with an extendable dipper makes this extremely versatile."

The simplicity of the power management system feature, which affects the speed, responsiveness, tractive effort and anti-stall, was a big selling point. "You want to go fast; you dial it up for speed," he said. "You want more power to the tracks and front end; you turn the dial the other way."

Bilhardt heard of this machine for the first time when he had been working for a very large engineering construction management company where he had worked for approximately 25 years. The company performed mega construction projects … some of them $2 or $3 billion jobs with cranes and some of the largest equipment available. So, Bilhardt knew what machines did.

The JCB 1CXT was a unique machine that he had his eye on since starting his business. He said that this machine has been around for the past four or five years or maybe longer, but it was not sold in North America because it didn't have a Tier IV engine.

"I've actually been watching the development of this piece of equipment for several years, and even sent messages to JCB wanting this," he said. "Finally, when I noticed the machine was available for pre-order in the U.S., I immediately got in touch with Darius [Prentice of Briggs JCB] and we worked out the details.

"If anyone questions the value or worth of this machine, all I can say is go out and buy a 50 or 75 hp. compact track loader, and then go out and buy a small excavator. This is by far the better deal and has both machines combined in one."

Bilhardt added that the 1CXT machine is ideal for his dirt and gravel jobs, road repair, tree work, and grubbing, and it pairs well working with larger excavators for fine dirt work and material movement.

"Unlike a compact track loader, the 1CXT has a spacious entrance to the side and you're sitting up high in an air-conditioned cab where you stay dry in any kind of weather in a machine with great visibility," he said, and added, jokingly, "if there was ever a hurricane that would show up while I was on a job site, this machine is where I would hide." 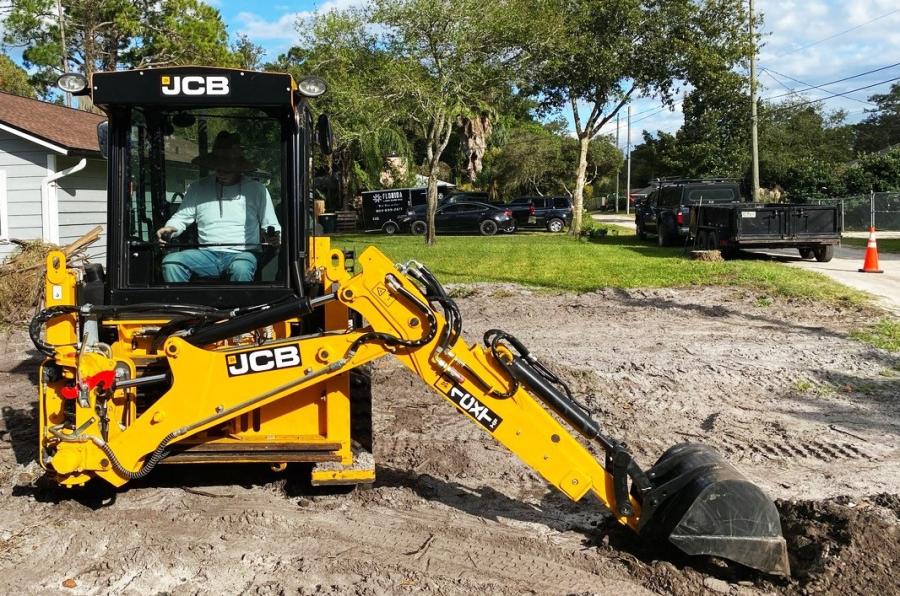 The 12.6-in. tracks give great low ground pressure for traversing uneven and debris on ground, while giving the ability to work at a homesite without chewing up someone's lawn, he said. In the marshy areas, Bilhardt feels he has the advantage over the wheeled backhoe loaders. "This one machine can get my jobs done," he said.

Bilhardt relies on Briggs JCB for service of the machine and gave high marks to the sales staff.

"Darius [Prentice], my Briggs JCB salesman, has been absolutely excellent," he said. "He is the ultimate salesperson and is truly understanding of my needs. He's been guiding me through the process of matching the correct attachments for the machine. He's been patient with me as a ‘newbie' on this new machine."

Prentice said that Bilhardt's machine actually sold another 1CXT for him.

"I got a call from a custom homebuilder who was looking for a backhoe attachment arm for the front of a compact track loader, and he told me what he was going to be using it for," Prentice said. "I said I had the perfect machine for him and a person to speak to. This contractor came with his machine operator and met with me and Scott [Bilhardt] and they checked out this machine on a job site. They ended up buying one. This customer called the other day to tell me his machine is awesome and is everything I said it would be, and he really appreciated it."