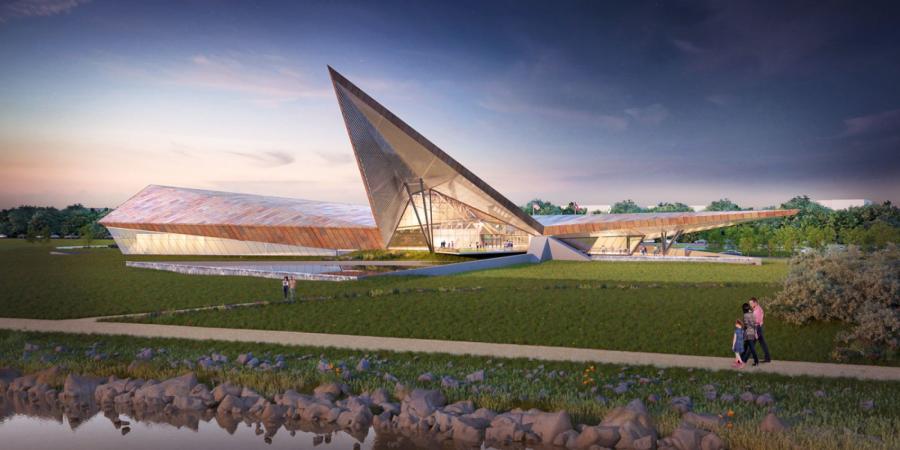 A rendering of the museum.

Construction has officially begun at the site of the United States Marshals Museum (USMM) at Fort Smith in Arkansas.

July 26 was a “big day” for Patrick Weeks, USMM president and CEO, for whom the start of construction on this special project was a long time coming.

“It's been 11 years,” said Weeks to Talk & Business Politics. “We're now sitting here in mid-2018, and we're finally not just breaking ground – we've done that, last year we spent just about $900,000 on bringing in 53,000 cu. yds. of dirt to build the building pad out and put that through a settlement period—but now we're getting ready to start another $18.2 million of construction.

“Right now, we're going to see a lot of dirt moving. We're going to see this thing flatten out after a little bit. Next week, we'll see the construction trailers come in. We're going to start to see a lot more people on this site — electricians, plumbers, that kind of thing, going on to make sure the utilities get to the right places per the plans. And then, when they get all that underground, under-slab work done, we start to pour concrete and we'll go from there.”

According to Weeks, in six months, the site will see the building structure form, Talk Business & Politics reported.

Weeks said that the project is still seeking funds of around $17.8 million to complete the project. However, according to Robert A. Young III, the USMM Foundation Chairman, the goal is doable.

“We are making great strides, and are energized to build this iconic Museum of which all Americans can be proud,” said Young.

Although the U.S. Marshals Service chose the site for the museum in 2007, a ceremonial groundbreaking didn't occur until 2015, Talk & Business Politics reported. Officials had previously wanted to see the building opened by the end of 2017, but fundraising delays slowed the project. Now, officials are planning for a facility opening by Sept. 24, 2019—just in time for the 230th anniversary of the U.S. Marshals' formation.

The 53,000-sq.-ft. museum, dubbed the Mary Carleton and Robert A. Young III Building, will include five key historical galleries:

The building will also be home to: