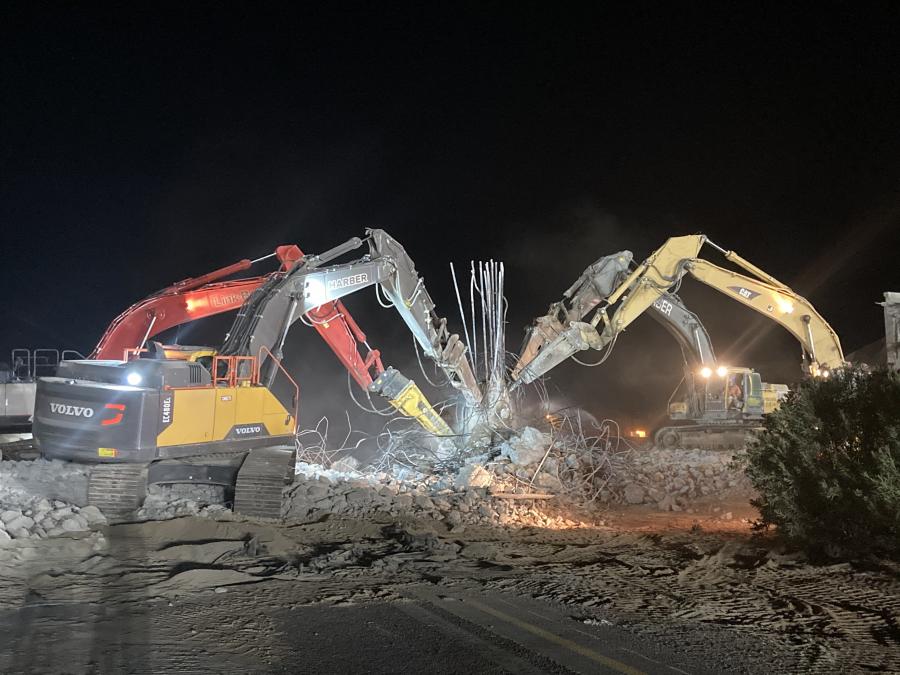 Granite Construction Inc. is continuing to make progress on the California Department of Transportation's (Caltrans) $44 million, multi-year project to reconstruct the interchange at Imperial Avenue and Interstate 8 (I-8) in the city of El Centro.

The initiative will remove the existing bridge and eastbound on- and off-ramps, then reconstruct the structure and the on- and off-ramps in both directions, construct a new entrance loop ramp from southbound Imperial Avenue to eastbound I-8 and create access to the city's upcoming extension of southbound Imperial Avenue to city areas south of I-8.

The state's Regional Improvement Program is providing $42 million of the cost, with $2 million from the Federal Highway Priority Projects Program.

On July 6, the eastbound I-8 on and off-ramps at Imperial Avenue were closed for eight-to-10 months for Stage 1 construction as crews worked on the southern portion of the intersection. The traffic plan is based on lane closures (day and night) and detours.

Stage 2 work on the northern portion is anticipated to take four-to-six months to complete and could begin as early as December. During this stage, all I-8/Imperial Avenue on- and off-ramps will be fully closed.

The project will be executed in two phases. The first phase will demolish the existing bridge and construct the new Imperial Avenue Bridge. This phase will include all the work involved on the south side of I-8 and a portion of the north side. This phase began in May and is scheduled to be completed by October of 2021. 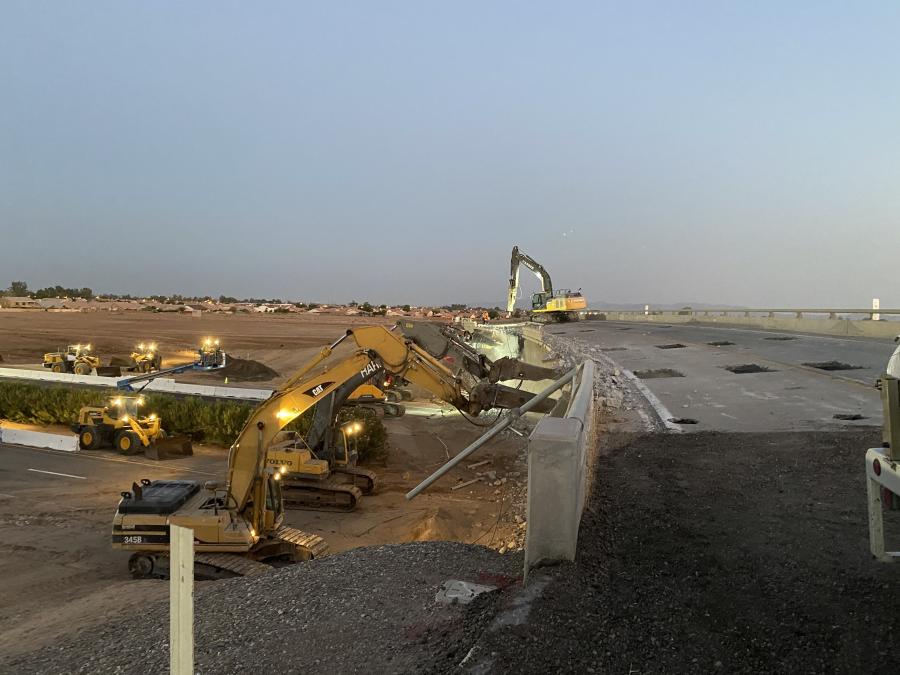 "We anticipate one or two nights for each closure totaling up to five full freeway closures," said Fausto Gonzalez, Granite's project manager. "Additionally, single lane closures will be needed to perform other miscellaneous work such as k-rail installation, freeway striping and bridge column/abutment removals. This work will be scheduled for night operations."

Construction of the new bridge and ramps will begin soon, with a completion goal of October 2021.

"This project was planned in a way that will minimize public inconvenience and still provide us the ability to complete the project on time," said Gonzalez. "The first phase required the closure of the on/off ramps east bound. That allowed us to build the majority of the project, except for the westbound on/off ramps. Starting in January 2021, phase two will overlap with phase one. At this point, all ramps on Imperial Avenue will be closed for the construction of the bridge, including all connectors.

Partnering to Get the Job Done

"We are fortunate to have a team with a strong mindset on partnering," said Gonzalez. "This has allowed the team to come together and work towards a shared goal. I'm confident that together we will overcome any issues and great results will be achieved." 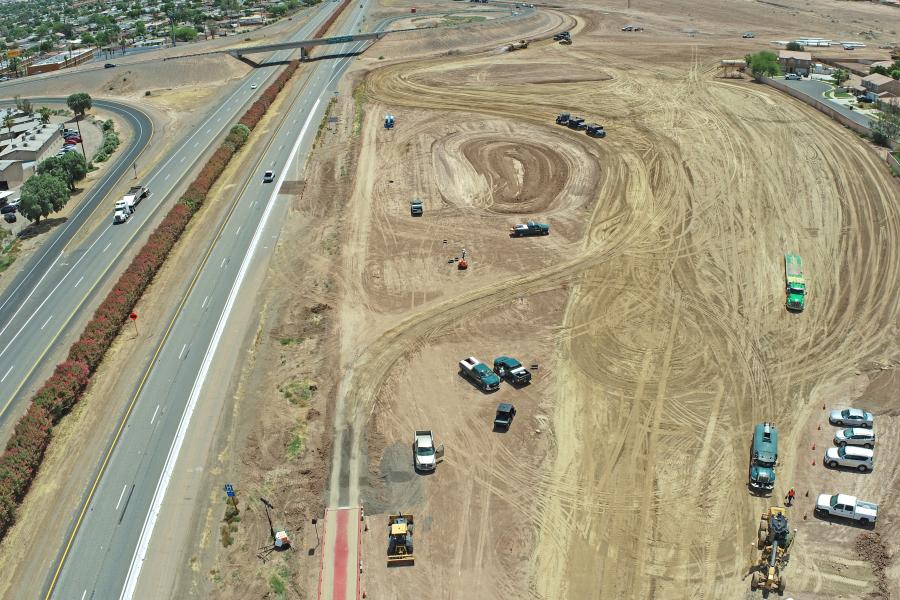 The demolition and excavation operations should generate approximately 600 cu. yds. of concrete, 80,000 cu. yds. of native fill material that will be incorporated into the project.

"Granite has always been very environmentally oriented and this project will not be the exception," said Gonzalez. "We will recycle and incorporate into the project all allowable materials generated from the demolitions and roadway excavation." 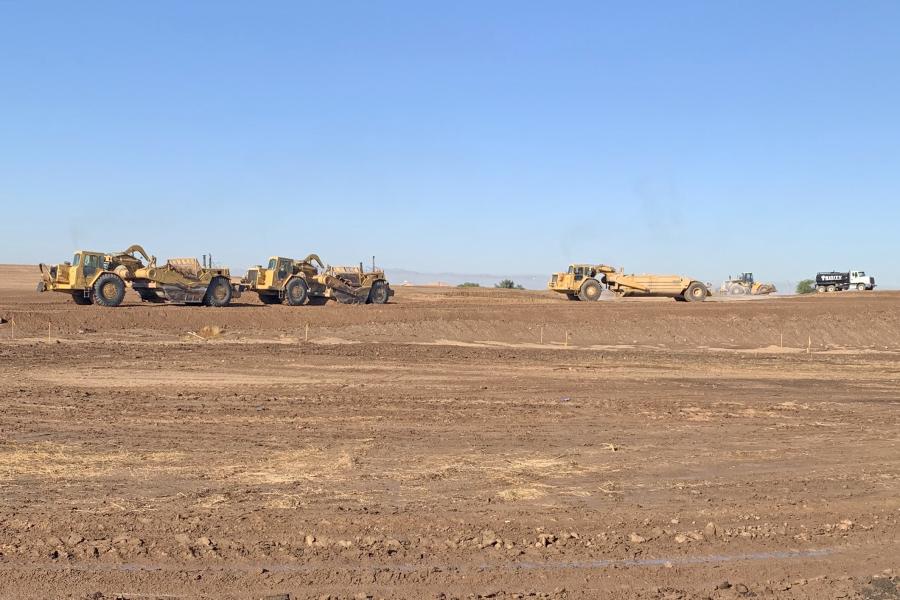 "Due to the nature of the project, this project will be equipment intense," said Gonzalez. "Consequently, our ability to complete this project on time will highly depend on our equipment and its ability to run every day. For this reason, we inspect and maintain all equipment prior to the start of shifts to ensure that it's in its best working condition."

Granite is utilizing a Cat 637 scraper to transport loads to the fill area, as well as Cat 824G tractors and Cat 143M road graders equipped with GPS to complete the job.

"The local dealerships have been a crucial component for the development of the project," said Gonzalez. "Their commitment and ability to adapt to our needs has been very positive. As a result, we have been able to stay on schedule."

"Some of the design and engineering challenges was the staging of the project in order to minimize the traffic impact of the area," said Daniel Hernandez-Duarte, Caltrans resident engineer. "In order to reduce the construction time and associated traffic congestion, Design proposed to El Centro to close the whole interchange. District 11 Design, El Centro, the county of El Centro and Imperial Irrigation District worked together to reach an agreement to reduce impacts to the public. The life expectancy of the project is governed from the structures. For bridges and retaining walls, that life is 75 years, however in many cases with proper maintenance, we see a much longer time." 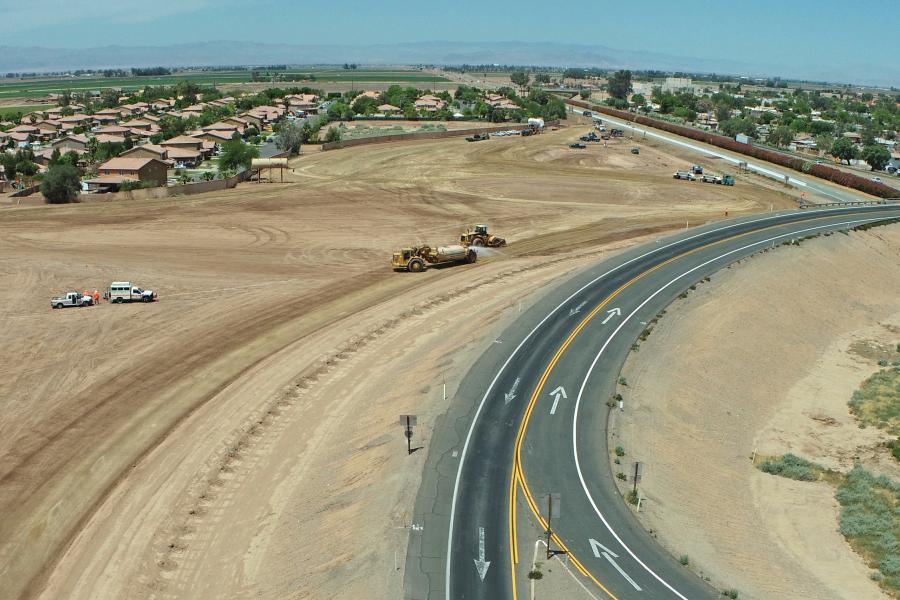 Caltrans District Director Gustavo Dallarda emphasized the need for motorists to watch out for and slowing down for construction workers, and to avoid the work zone when possible.

"Their safety is paramount," he said.

Noisy construction work is being scheduled during the day as much as possible, with three months of pile driving expected. Nighttime bridge demolition also will be noisy, but it is only expected to occur one or two nights at a time on a few occasions.

"We work very hard with our contractor to reduce that [noise and dust] to a minimum," said Dallarda.

"The safety of our employees and the public has always been Granite's number one priority," said Gonzalez. "For this reason, Granite, in conjunction with Caltrans, developed a new construction exit on a less traveled road for our trucks and construction equipment, thus providing a safer construction zone. To put it into perspective, this project requires approximately 228,000 cubic yards of imported borrow, which equates to approximately 15,000 truckloads in a lapse of 55 days.

"This means that on average, a truck will merge onto live traffic on the I-8 approximately every two minutes," he added. "From a safety stand point, we saw the need to change the original plan and come up with a solution that could improve safety. To achieve this goal, we had to get the support from the city, Imperial County and other private property owners since the new route required the use of their right-of-way."

Minimizing public inconvenience is a given for Granite, be it large or small projects. 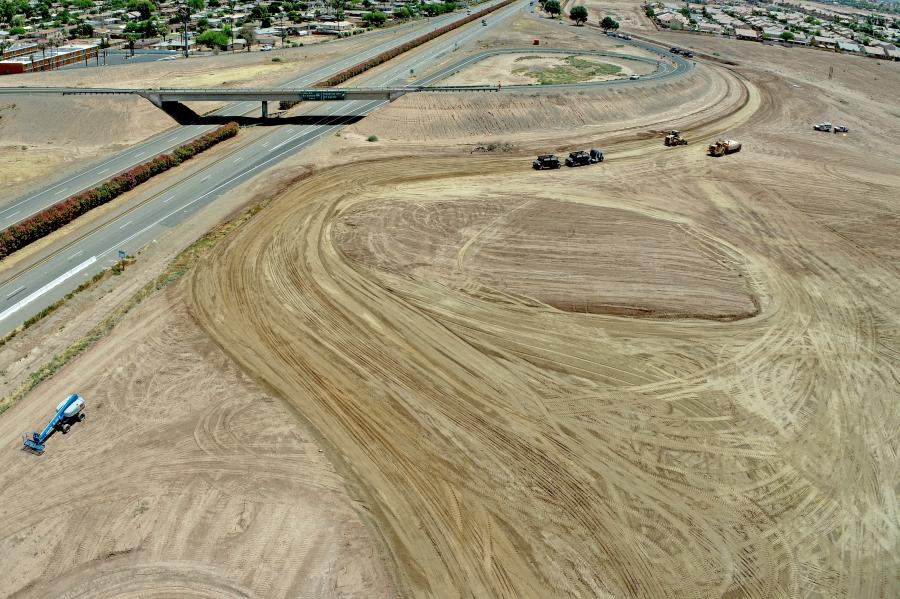 "We constantly plan operations to reduce the number of freeway and lane closures," said Gonzalez. "The majority of the operations will be performed during daytime working hours, except for operations that will require traffic lane closures. Planned nighttime work includes the bridge removal, along with setting up and removing falsework required for bridge construction . As of today, we have not encountered issues that could delay or impede the ability to construct the project. Fortunately, our relationship with Caltrans has been very good and I'm confident that together we will overcome any future issues.

"With the COVID-19 pandemic, keeping our employees safe and healthy has been a constant challenge," he added. "Granite has always been proactive in protecting our people. For this reason, we have implemented additional protective measurements such as social distancing, face mask requirements, using radios to communicate and minimize proximity with other co-workers, and disinfecting equipment/tools that could potentially spread the virus."

Earth work operations began in May and they should be finished in January 2021.

Bridge demolition took place overnight on July 22 during a 12.5- hour full closure of the interchange and main lanes on I-8.

"Traffic within the project limits is approximately 16,000 to 27,000 vehicles per-day, primarily associated with the growth in international trade and travel between the United States and Mexico, as well as travel onto and from Imperial Avenue from north of Interstate 8," said Cathryne Bruce-Johnson, Caltrans public information officer. "In the next five years, traffic is expected to double. This project will aid in keeping vehicles moving from the international border along State Route 111 to destinations across the states."

The interchange is expected to open to traffic in late 2022, with final delivery in mid-2023.

"It supports economic growth," said Caltrans Director Toks Omishakin. "That means more local jobs. Once it's finished, it will eliminate the need for local motorists and commercial trucks to travel out of their way onto city streets and county roads."

Caltrans is providing real-time traffic information via http://quickmap.dot.ca.gov/, @SDCaltrans on Twitter, and at www.facebook.com/CaltransDistrict11. CEG