The M3 Bradley is among three heavy-duty artifacts scheduled to be transported to the museum’s construction site this summer. 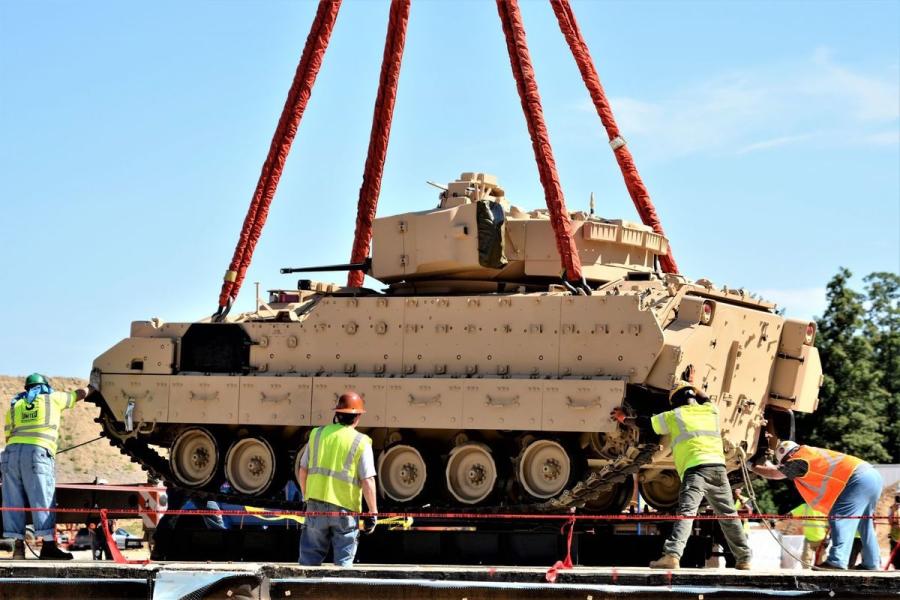 The crew used a heavy construction crane to transfer the vehicle from a flatbed truck onto a reinforced concrete slab. (Photo Credit: Jim Dresbach)

The National Museum of the United States Army welcomed its first artifact on July 31. A 28-ton M3 Bradley Cavalry Fighting Vehicle was delivered to the museum's construction site near Fort Belvior before it was set in place on a reinforced concrete slab, Pentagram reported.

Construction workers transported the M3 Bradley from the Red River Army Depot in Texarkana, TX July 27 for a days-long journey to the site. Once there, the crew used a heavy construction crane to transfer the vehicle from a flatbed truck onto a reinforced concrete slab. The entire process took about 30 minutes. Before the move, the crew removed the M3Bradley's exterior ammo box so as not to damage it, Pentagram reported.

Army Historical Foundation Chairman Gen. Gordon Sullivan spoke of the M3 Bradley's significance: “This vehicle here, symbolically is the first exhibit to go in this museum. It is the Bradley Scout Vehicle,” Sullivan said. “It happens to be certified as the first vehicle that arrived in Baghdad on the airfield during the attack on Baghdad (during Operation Iraqi Freedom). It's from the 3rd squadron, 7th cavalry, which is one of the oldest cavalry regiments. We'll put this on this pad and eventually build around it.”

The M3 Bradley is among three heavy-duty artifacts scheduled to be transported to the museum's construction site this summer. An M4A3E2 Sherman “Jumbo” Tank, currently housed in Fort Benning, Ga., and a LCVP Personnel Higgins Boat will arrive in early August, Pentagram reported.

Construction is expected to be completed in May 2019.

To read more about the museum and its construction, take a look at this CEG article.