Hauling Dirty Heavy Equipment Is Hazardous to Your Reputation 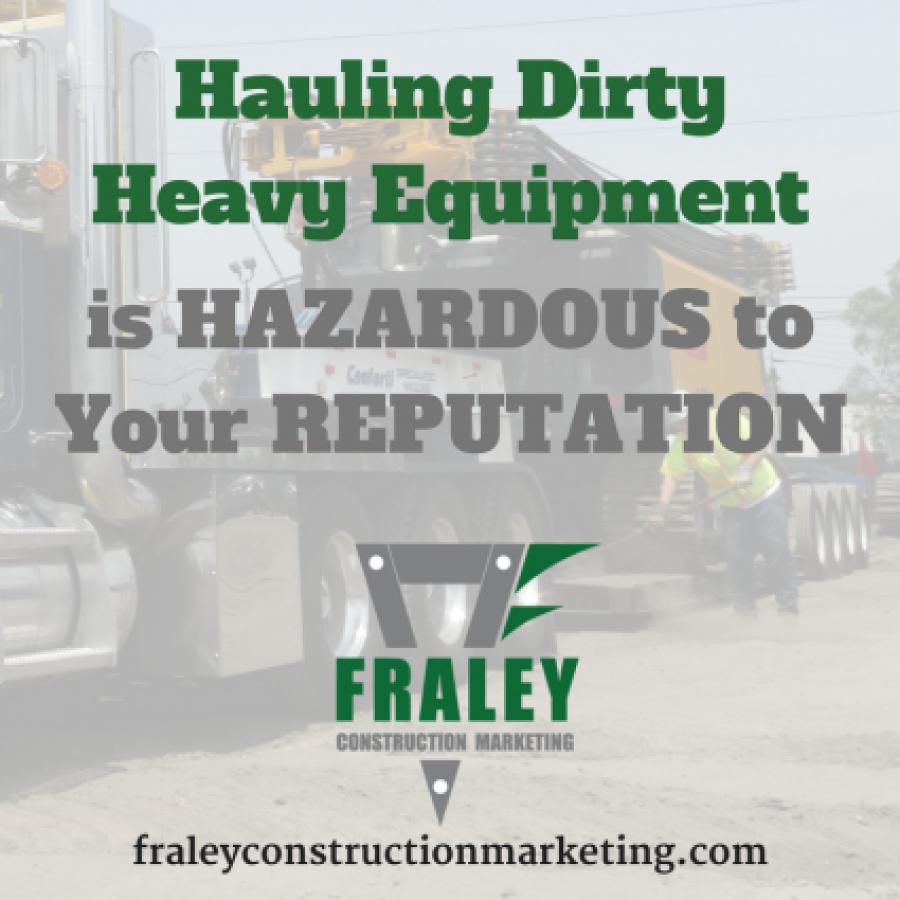 The job is wrapping up and your driver is picking up a dozer to haul back to the yard. The tracks are caked with dried mud and stones following grading after an extended period of rain. It's a Friday afternoon and he's barreling down the streets of a high rent district to get the machine delivered so he can start the weekend. As luck would have it, a local transportation executive is pulling out of his driveway just in time to watch a lowboy leaving a trail of earthen waste on his meticulously paved street. Your logo passed by in a flash, but his memory of the incident will last a lot longer. That's just the tip of the iceberg as it relates to your construction firm's reputation.

Granted, this is a hypothetical situation, but these types of incidents (and accidents) occur when you're transporting thousands of pounds of heavy equipment on a regular basis. This is not just an issue for contractors; it affects equipment dealers, material suppliers, hauling subcontractors, and more. Whether you're dropping dirt and gravel; spilling asphalt; spewing gasoline, oil, or dirty water; or dripping cement mix, the ways you can offend the public are many.

How it Hurts Your Reputation

Hauling dirty heavy equipment can create a public relations nightmare. Whether you're simply dirtying local infrastructure, cracking windshields, or dropping the debris that will lead to cracked windshields and dents, you can impact a wide cross-section of society.

As activity continues to ramp up, the construction industry will be putting more and more machinery on the nation's roads and bridges. Your firm will have more opportunities to either improve or tarnish its reputation.

The Tangible Versus Intangible Disconnect

The tangible trumps the intangible in the construction industry. On one hand, you can measure the time and money required to clean every piece of equipment before it hits the road. On the other hand, it's nearly impossible to accurately measure the public relations damage.

If your equipment, truck, or lowboy has a company logo, you now have a traveling billboard. Any time your logo appears, whether it be on equipment, clothing, or signage, your brand is at risk. That doesn't mean you should refrain from using your logo. Rather, you should establish and enforce the rules of conduct with your drivers or hauling subcontractor.

How You Could Lose Business

Some of you are reading this and poo-pooing the idea of a tarnished reputation. Perhaps you intentionally leave your name and logo off your equipment. Or maybe you work strictly as a low bid contractor and figure there's no way it can hit your wallet. You might even have a receptionist that will happily deflect incoming calls from angry residents and drivers.

The problem is that you can't control who is affected. In other words, you could directly or indirectly offend someone that can cause real headaches. To me, this is a risk far too great for any construction firm to bear. Allow me to identify some potential angry drivers:

• A decision-maker that works for a client or prospective client

• A member of a selection committee that reviews your bids

• A business partner on current or future projects

• A banker that may or may not approve your loan

The Potential for Retribution

We're going to walk the line here to establish how retribution could affect you. Contractors or material suppliers that have dealt with an overzealous inspector know this is not just paranoid talk.

Let's assume the worst case scenario. Consider that one of your machines has kicked up a stone and damaged a windshield. There are many possible scenarios in which your bottom line could be affected.

What if you hit a transportation official and they deploy an inspector to make things tough on a job or at your plant? What if you hit someone with decision-making power and lose an opportunity as a result? What if you hit a local politician and he or she decides to create headaches on a current public sector project.

More Accountability in the New World

Things were different years ago. You weren't held to the same standards by the public. If your equipment was dirty, leaky, or smelly, most people didn't make a fuss. Perhaps they complained to friends, family, or government official, but that's where it stopped.

The risk has increased, especially now that virtually everyone has a smartphone on hand. Those offenses that would be forgotten by the time the offended party reached their destination can be acted upon immediately.

We've come a long way since the “Silent Generation.” In today's world, people are more vocal about their concerns. They use social media and other internet vehicles to drive the point home and to rally like-minded troops. Whether it be to complain about your firm hauling dirty, leaky, smelly equipment through their neighborhood, damaging theirs or a neighboring property, or trying to shut down a project they don't like, the digital noise can be deafening.

Our focus in this article has been on how hauling dirty heavy equipment can tangibly and intangibly damage your reputation, but the risks go far beyond. And we only scratched the surface on hypothetical scenarios.

We didn't discuss insurance claims, police reports, HR headaches, irate people, and the additional conflict and stress that comes with it. All things considered, the cost of cleaning your iron before it hits the road seems minimal, doesn't it?