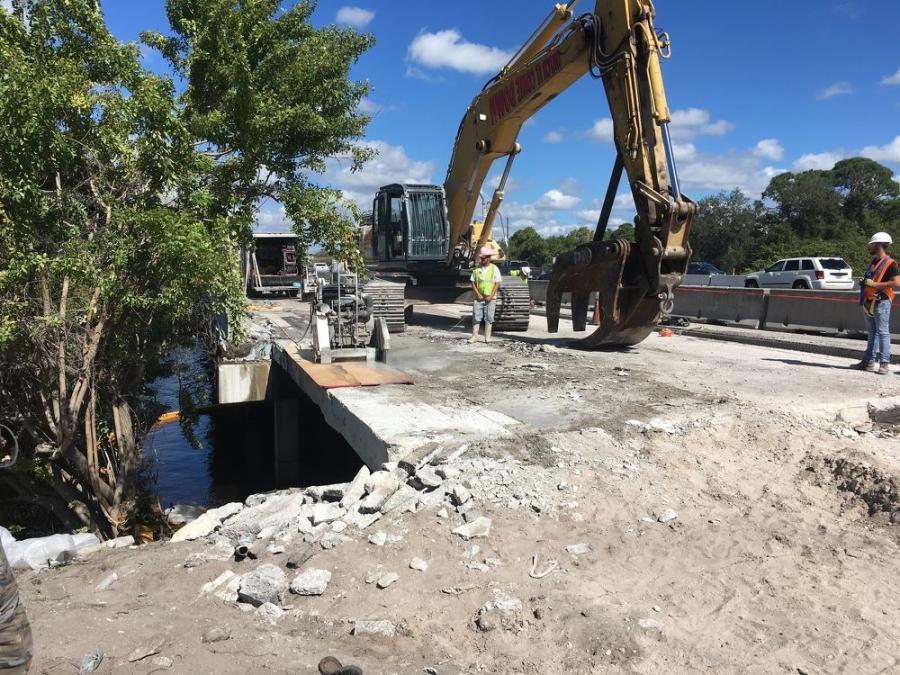 A Komatsu 450 excavator picking an existing concrete deck slab and performing demo on the existing I-95/Hillsboro Canal bridge, separating Palm Beach County on the north and Broward County to the south.

For more than a century, the east coast of South Florida has been an area of the country that attracts people worldwide for both vacations and year-round living — and that allure may never end.

And what's not to like? Warm temperatures 12 months out of the year; wide, glistening beaches; and a range of lifestyles available for people of all ages are just a few attractions of the Miami-Fort Lauderdale-Palm Beach area. 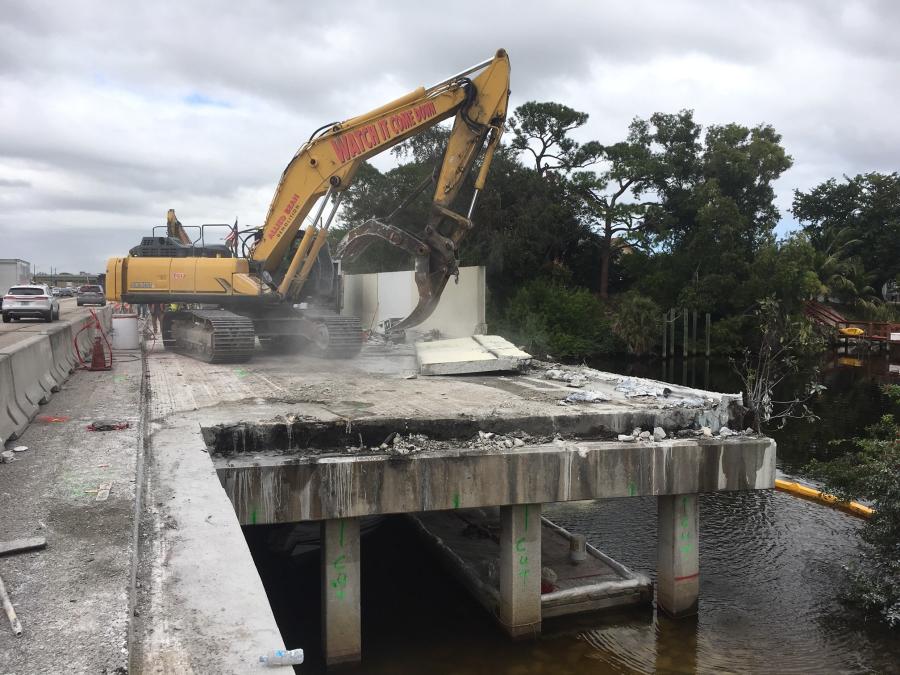 Of course, with that growth has come more and more vehicle traffic along a road-and-highway system squeezed into a narrow strip of land between the Atlantic Ocean to the east and the Everglades to the west. Therefore, roads in the counties of Palm Beach, Broward and Dade are seemingly always congested due to the amount of land available and the number of cars, trucks and buses moving about.

The Florida DOT has stepped up its efforts to lessen the impact of the situation with another phase in a series of improvement projects along Interstate 95, the most important of several major north-south highways in the region. I-95 begins in downtown Miami before continuing up the entire east coast for 1,900 mi. to the Canadian border.

Work Under Way at Several Points

Just about 35 miles north of where the interstate begins its long journey, FDOT is overseeing the work to keep I-95 Express traffic moving at a faster, more efficient pace. This effort includes expanding the number of Express and High Occupancy Vehicle (HOV) lanes on the highway, while also modernizing toll lanes and several interchanges from Miami to Boca Raton. 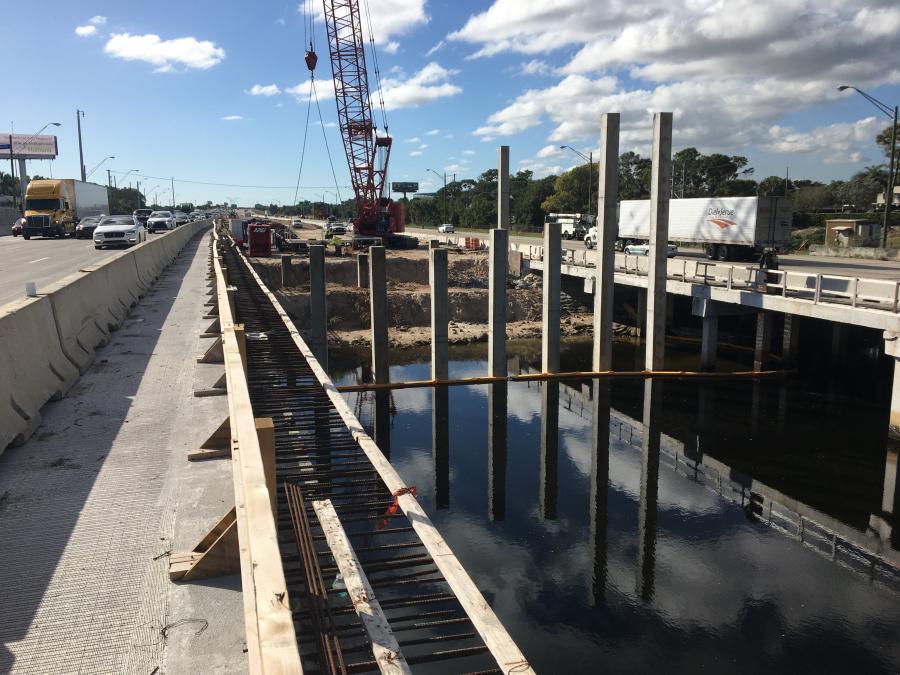 "I-95 Express is an initiative undertaken by FDOT to help provide a safe and efficient long-range commute for motorists in South Florida," explained Andrea Pacini, the I-95 project spokesperson for Broward and Palm Beach counties. "Express lanes have been proven to improve trip reliability, commute times and alleviate congestion."

The entire 95 Express project consists of three phases, each with lettered sub-sections (A-C).

Construction started in 2008 in downtown Miami with crews working all along the interstate to the far north of Dade County, before tolling began in 2010. The second phase of I-95 construction included the area between Golden Glades and Broward boulevards in Broward County in November 2011, with the road open for tolls in October 2016.

Phase 3 of the 95 Express Lanes project will stretch for 29 mi. north from Stirling Road in Broward County to Linton Boulevard in Palm Beach County.

Focus Is Now on Phase 3B

Several stages of building are underway on Phase 3B 1&2, which runs from south of SW 10th Street at Deerfield Beach in Broward County north to Boca Raton's Linton Boulevard in Palm Beach County — a total of 10.6 mi.

Phase 3B-1 is 4.792 mi. long and affects the Hillsboro Boulevard and Palmetto Park Road interchanges, as well as the Camino Real overpass. 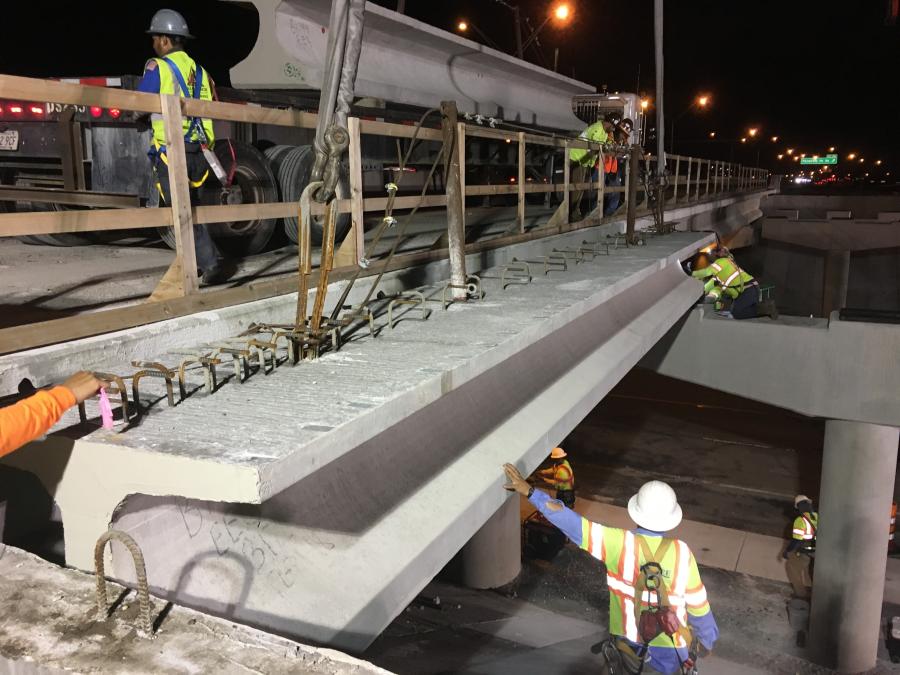 "Already, those two bridges in Boca Raton were both widened under this contract (to accommodate the new lanes on I-95), and the Hillsboro Canal bridge [on the border of the two counties] has been completely replaced and raised to improve boat clearance," Pacini explained. "This work is all being done while maintaining traffic for approximately 300,000 motorists per day."

She added that the surface widening is broken down into three steps: I-95 northbound widening first, followed by the median and then I-95 southbound.

As of Jan. 23, Phase 3B-2 median widening was ongoing with bulldozers, motorgraders, vibratory rollers, excavators, front end loaders and backhoes scurrying about the work site. That section of the Express 95 project is 5.831 mi. long, affecting the Glades Road Interchange, with minor modifications made to ramps at Yamato Road, Linton Boulevard and Congress Avenue — all in Boca Raton.

This part of the project includes converting the Glades Road bridge at I-95 from a cloverleaf into a diverging diamond interchange (DDI). Other work will be done to expand bridges over the nearby South Florida Rail Corridor tracks and Military Trail, the I-95 bridge over the C-15 canal and a complete reconstruction of the Clint Moore Road Bridge over the interstate.

Pacini said that apart from the Glades Road Interchange re-design, there will be no significant impacts to the arterial roads leading to I-95 on Phase 3B-1&2.

The entire project includes transforming the existing HOV lanes to High Occupancy Toll (HOT) lanes, at the same time broadening a single lane in each direction, resulting in two tolled express lanes running north-south on I-95. Despite that, the number of existing General Use and Auxiliary Lanes will remain the same.

Access to the Express Lanes will be limited to designated entry and exit point locations between Hillsboro Boulevard and Palmetto Park Road, according to the FDOT.

Experienced Pros on the Job

Fort Lauderdale-based Prince Contracting is the lead builder on both 3B-1&2, with SICE, a Spanish company, performing the infrastructure work on the Express 95 intelligent transport systems (ITS). General Asphalt, with two offices located in Miami, is handling the paving operations on the project.

Work to Get Busier as Year Progresses

"In 2020, there will be continued widening of the median along the 3B-1 portion of the project, which is anticipated to be completed this summer," Pacini said. "At that point construction will start on I-95 southbound. Also, this year, 3B-2 will complete safety improvements along the southbound exit ramp to Peninsula Drive and begin mainline construction along I-95 northbound, as well as perform tree relocations project-wide." 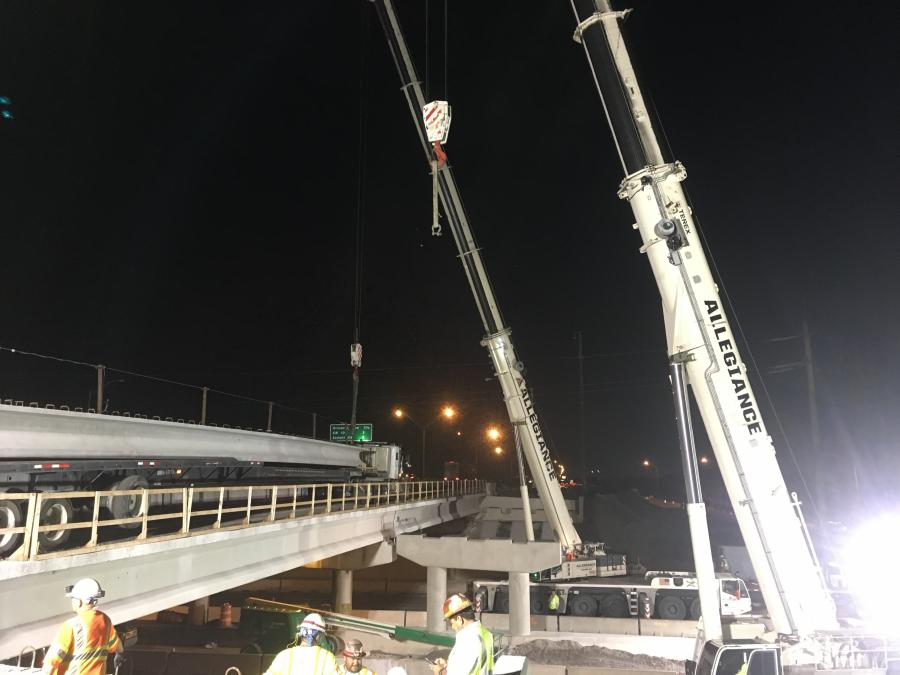 "These are design-build road projects, meaning there is a slow ramp up period for construction in the beginning as the design is concurrently being drafted," she continued. "These jobs are typically four years in duration with Years Two and Three being the busiest. At peak for 3B-2, there should be around 300 to 400 people working on the project."

And the future may see an even longer extension of the new and improved I-95, Pacini reported.

"FDOT is in the planning stages to extend the 95 Express lanes north up to Indiantown Road in Jupiter [in far north Palm Beach County], but that project is not on the agency's 5-year workplan just yet," she explained. CEG