The work, based on improving traffic flow and safety on busy sections of U.S.-75 and Nebraska Highway 2 (N-2), started in March in 2016. 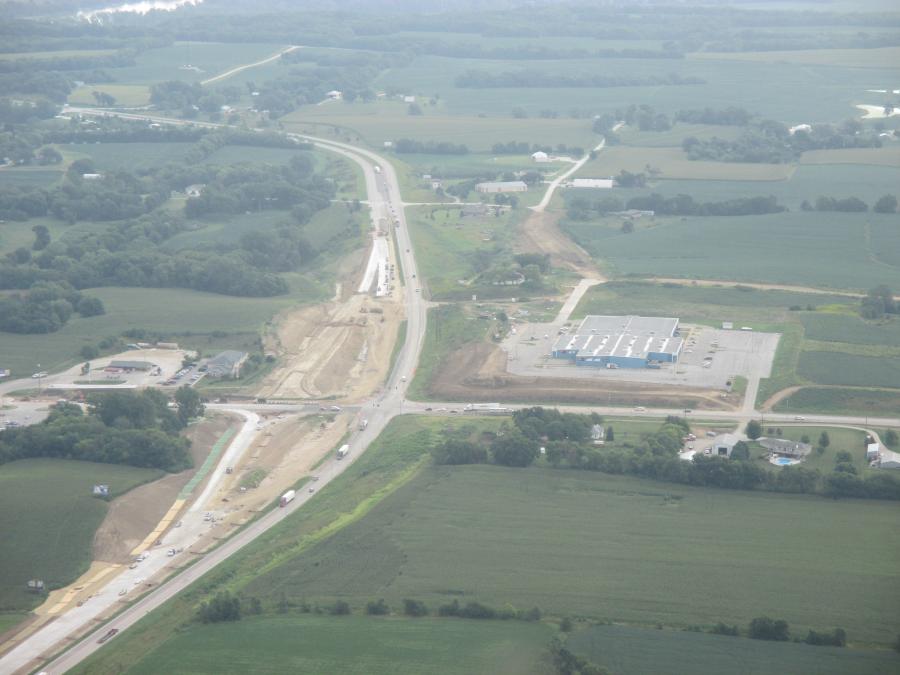 The $25 million-plus Nebraska City Southeast Interchange project — a Nebraska Department of Transportation initiative — will be completed by Constructors Inc. by the end of this year.

The $25 million plus Nebraska City Southeast Interchange project — a Nebraska Department of Transportation initiative, will be completed by Constructors Inc. by the end of this year. The work, based on improving traffic flow and safety on busy sections of U.S.-75 and Nebraska Highway 2 (N-2), started in March in 2016. Engineers and crews are overcoming serious soil stabilization and groundwater obstacles.

The purpose of this project is to improve the U.S.-75 and N-2 transportation asset by improving the roadway's operational efficiency and decreasing the frequency and severity of collisions by eliminating the at-grade signalized intersection on the N-2 high-speed expressway, according to the project website.

Mike Habegger, Nebraska Department of Transportation's project manager, noted that the old interchange was controlled by stop lights at the intersection for both section of highway.

“There had been some congestion,” he said. “Both highways carry quite a bit of traffic and because of the accidents in the past, for safety reasons, they determined to elevate N-2 over U.S.-75 with a compact interchange.”

The work site is located at the south edge of Nebraska City, with U.S.-75 coming up from the south. Both highways merge for a section known as the Nebraska City Bypass, which covers the southwest portion of the city. When one reaches the west side of the city, U.S.-75 goes north up to Omaha and continues on to South Dakota, and N-2 heads west towards Lincoln.

Average daily traffic on N-2 in 2015 was 10,000 vehicles and when the work is completed, will increase to 15,000. U.S.-75 carries 7,500 vehicles daily, which will increase to 10,000. Nebraska Department of Transportation estimates that the improvements will be able to meet traffic needs for the next 20 years.

“We're hoping to have the bulk of the project completed by the end of the 2017 construction season if the weather holds out,” said Habegger.

In addition to the work elevating N-2 over U.S.-75, the project also is covering sanitary sewer, lighting, water and storm sewer infrastructure and the construction of new county roads.

The new infrastructure was designed by Olsson Associates.

“The phasing for the project was probably the biggest challenge they tackled,” said Habegger, “because with the amount of traffic the roads are carrying and keeping the traffic flowing at all times, the work contains quite a few phases. We've been moving traffic back and forth with a lot of temporary signals and other measures.”

Trucks make up about 30 percent of the traffic, and to extend the lifespan of the new roads, N-2 will have an 11-in. doweled paving to help carry the load. The subgrade is being treated with a lime process, and for the most part, crushed concrete is being used for the foundation. Additional features include the use of cover crop seed, silt fence, rock berms, and slash mulch to address environmental issues.

Motorists are respecting the traffic plan, which is utilizing a microwave temporary traffic signal system, which Habegger stressed is “working very well.”

A nearby power plant has between 150 and 200 cars coming in for work during the afternoon rush hour, all at the same time, which adds further complications.

“The microwave system monitors how many vehicles are in each lane and each turn lane,” said Habegger, “and adjusts the timing of the traffic signals based on the traffic flow. The people have been pretty respectful and we've been fortunate to have hardly any accidents. This is a very rural area and a lot of the people are finding their way around on country and back roads — they don't want to get caught in traffic delays.”

A major construction challenge has been the groundwater issue.

“The original intersection was an at-grade crossing at the bottom of a hill with soft-grade and groundwater,” said Habegger. “We're using geogrid fabric and crushed rock to stabilize the foundations. We have run into a lot of stabilization issues on the ramps for coming up and off of U.S.-75. Basically, Constructors is excavating the unsuitable material. In some places we just have to go down one foot to get it stabilized and in others, two to three feet — we replace it with rock and geogrid fabric and that usually gets the job done.

“We've also been using a lot of perforated grade drain tile and tying those drain tiles into the newly constructed storm sewer system,” he said. “We've been incorporating perforated drain tile to keep the water from migrating beneath the roadway. The groundwater is not that deep in this area because the road is near the Missouri River.”

The groundwater problem has made this project very much an engineering issue, especially as this is in an over-excavation area.

“We built some mechanically stabilized earth walls (MSE),” said Habegger. “Both of our bridge fills for the abutments — about 24 feet tall on N-2, are using six-inch MSE panels that have straps, which hold them in place. They are like a retaining wall. Because this area has unsuitable materials and groundwater, we excavated an additional 10 ft. below the original grade and replaced it with a soil that was recommended by the engineers and put in mechanical stabilizers.

“These areas also have a settling period of about 30 days,” he said. “Once we got the grade up, we put in settlement plates and inclinometer sensors from substations 820 to 846 — about a 2,000-foot area. We monitor weekly for settlement and whether it is pushing the grade one way or another. The Piezo meters measure the hydraulic pressure down there. We want this project to last a long time and we're doing it right. Between Constructors and the Nebraska Department of Transportation, everybody's been conducive to getting it built correctly.”

“We have weekly partner meetings,” said Habegger. “Brent is there everyday, and I'm there almost every day. If something comes up, we can usually get on top of it that day.”

Two of the access ramps on N-2 have been completed and are fully paved, with traffic diverted to them. N-2 is a four-lane east-west road —two lanes in each direction.

“We have traffic head-to-head, which we call a two-lane two-way and we're now working on the mainline road and the south ramps, as well as the two overpasses — eastbound and westbound,” said Habegger. “The girders are set on the overpasses and Constructors is looking to start on putting down the decking in and pouring the decks within the next two to three weeks.”

Save for a few weeks last winter due to the cold and snow, the work has essentially proceeded year-round.

“We had a fairly mild winter — by our standards,” said Habegger, who pointed out that the most of the work is done via day shifts. “Anything we have to do over the top of the traveled roadway like girder settings happens at night. In a couple of weeks we have to put up some overhead signs. We can close the highway after 10 p.m., but have to re-open it at 6 a.m..”

“Constructors has recycled almost all of the concrete and asphalt removed from this project that will be used in materials for future projects,” said Habegger.

Constructors has completed many projects for the Nebraska Department of Transportation.

“They know what they are doing on large construction operations and they have access to varying amounts of equipment that can be mobilized to the project and remain on site if needed,” said Habegger. “This is one of the larger DOT projects, especially for this area of the state.”

Habegger has five DOT staff helping him out, including Chris Hasenbank, a graduate engineer who is serving as an engineer-in-training; Jeff Fossenbarger, lead inspector; and Jacob Volker, Tim McCoy and Jason Kosmos.

“We've also had help from other personnel in our office and the District office in Lincoln,” said Habegger.

“The wet soil, groundwater and unsuitable material are presenting a lot of difficulties,” he said, “and they are handling them well, learning how to deal with multiple issues simultaneously.”

The project also has Nebraska Department of Transportation and Otoe County working together as two country roads leading to the intersections have been converted into right-turn only thoroughfares.

“The Nebraska Department of Transportation does not want to have people crossing over N-2 which will be a 60 to 65 mile-per-hour interchanges,” said Habegger. “We also constructed 1.25 miles of new county roads that will be given to the county to access homes along the project corridor.”

Commenting on the work done thus far, Habegger said, “There haven't been any new developments. We're still planning on getting traffic onto the new N-2 & 75 alignments this construction season and finish up with incidental work in the 2018 construction season.”