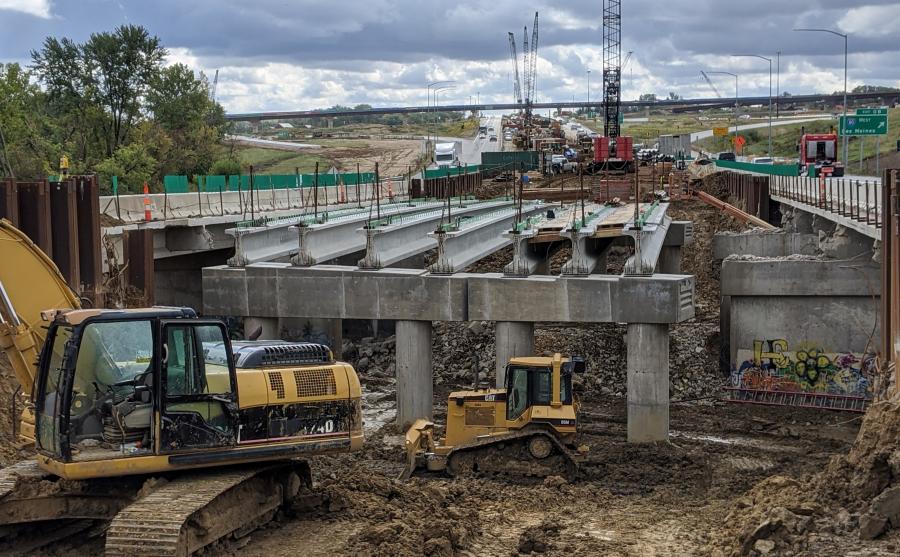 The total length of the $387 million interchange project is 7.5 mi. of mainline reconstruction.

The junction of Interstate 80, Interstate 380 and U.S. 218 in Johnson County is one of the busiest interchanges in eastern central Iowa. Known as the Systems Interchange and located within the cities of Coralville and Tiffin, it predominantly serves the greater Iowa City metropolitan area and is a major crossroads for freight haulers as well as local commuters.

The existing interchange is outdated and lacks the capacity to handle projected traffic growth. Because it plays such a vital role in transportation and economics, the Iowa Department of Transportation has decided to address the issue through a dramatic redesign and reconstruction intended to allow the interchange to continue to serve a growing population safely.

"The I-80/I-380 Systems Interchange Project is a comprehensive redesign that will improve travel in the area, making it easier and safer to get where you're going," said Catherine Cutler, transportation planner of Iowa DOT. It also is expected to spur economic development in the area. "This project is one of our top priorities."

The Systems Interchange Project has two goals: to expand capacity and increase safety. This infrastructure project will improve regional and interstate travel by replacing all four loops of the current interchange with directional ramps. An additional lane in each direction will be added to both I-80 and I-380. 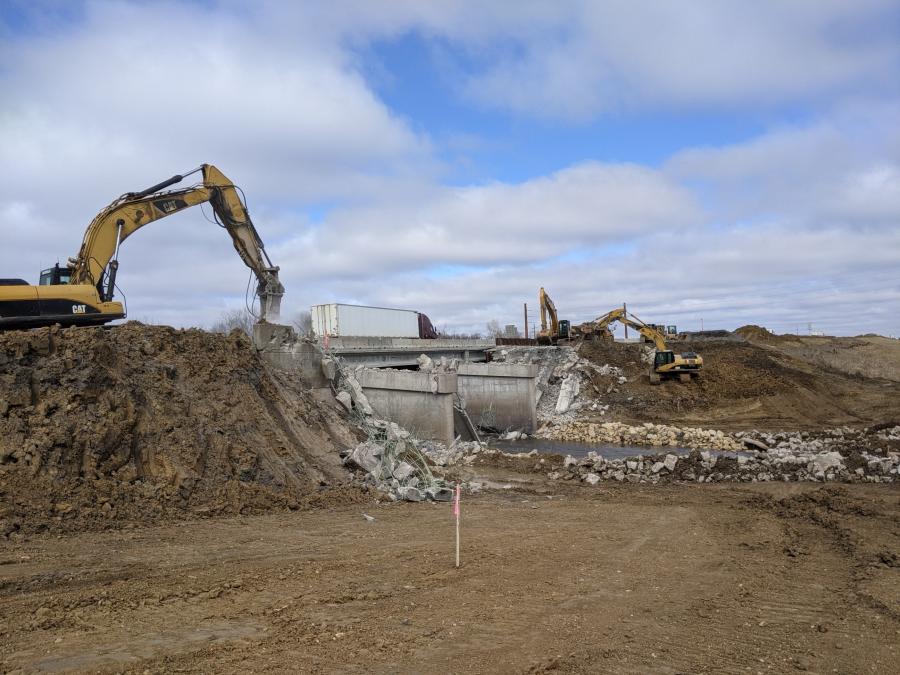 In addition, 21 new bridges are being built and two bridges are being widened. New pavement will be laid throughout the project area. The total length of the $387 million project is 7.5 mi. of mainline reconstruction.

Specifically, the project will widen 3 mi. of I-80 to six lanes (plus auxiliary lanes) between Ireland Avenue and I-380, with 12-ft. shoulders. According to Iowa DOT, from edge of shoulder in one direction to edge of shoulder in the other, the road will be increased from 120 to 160 ft.

Iowa DOT used a special letting for this design, bid, build project due to its complexity and schedule demands. Serving as prime contractor on the project is the joint venture of United Contractors Inc., a heavy highway construction firm working in the Midwest, South and Southeast, and Cramer & Associates, an Iowa-based contractor specializing in heavy highway work.

Andy Stone, project manager, United Contractors, reports that more than 200 workers are onsite each day. While most shifts are Monday to Friday 6 a.m. to 6 p.m., some contractors also work on Saturdays. 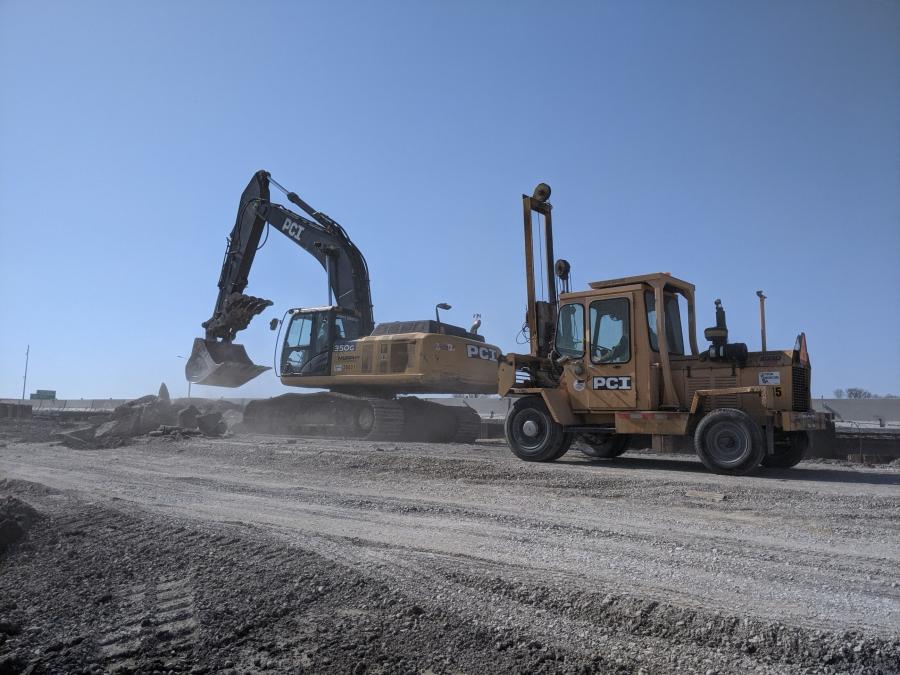 "Night shifts are used when needed to work on the interstate [and] not block the flow during high traffic times," said Stone.

Plenty of equipment is onsite, much of which came from Ziegler CAT, Altorfer CAT, Rexco, RTL and Mobile Track Solutions.

"Most of the equipment utilized on the job is pretty typical," Stone said. "One interesting piece of equipment is the wick drain drill rig."

Wick drains, also known as prefabricated vertical drains, are prefabricated geotextile filter-wrapped plastic strips with molded channels that serve as drainage paths to help remove water from soft, compressible soil to allow it to consolidate faster. These drains are typically installed by specialized equipment called a stitcher that is mounted on an excavator or crane and consists of a vertical mast housing a hollow mandrel. The mandrel contains a spool of wick drains, which are hydraulically pushed or vibrated into the ground. But before that takes place, a wick drain drill rig pre-drills stiff soils to enable installation.

Wick drains were included in the project's construction plans in some small areas of the project where settlement was of concern, Cutler noted.

"The triangular spacing was about five feet and the installation facilitated strength gain for the soils. The wick drains allow the pore water pressures to dissipate as the contractors place fill embankment on areas for future roadway and bridge construction. Overall, the wick drains help accelerate the settlement so the area can be made available quicker for the next step of construction, which might be driving bridge piling into the ground or paving operations," said Stone.

"The current phase of the I-80/I-380 interchange project is the largest and most complicated portion of the interchange reconstruction," Stone said.

"The construction phases of the project began in the summer of 2017 with right-of-way acquisition and the clearing and grubbing for necessary utility relocation," Cutler said.

Iowa DOT began coordinating utility relocation during the planning and design phase to mitigate any challenges.

"There are more than a dozen utility owners to work with on this project," he said.

One of the more complicated relocations was the temporary overhead transmission line relocations to accommodate bridge construction. As Cutler explained, the process involved establishing agreements between parties, placing temporary poles in the Iowa DOT ROW for interim line locations, collaborating on schedules and working to re-establish the permanent alignment over the new bridges once they've been completed.

"One of the overhead crossing locations has been returned to its permanent alignment already since the new bridges are done at that location," he said. "There are two other crossing locations that will be returned in a few years, as bridge construction continues there." 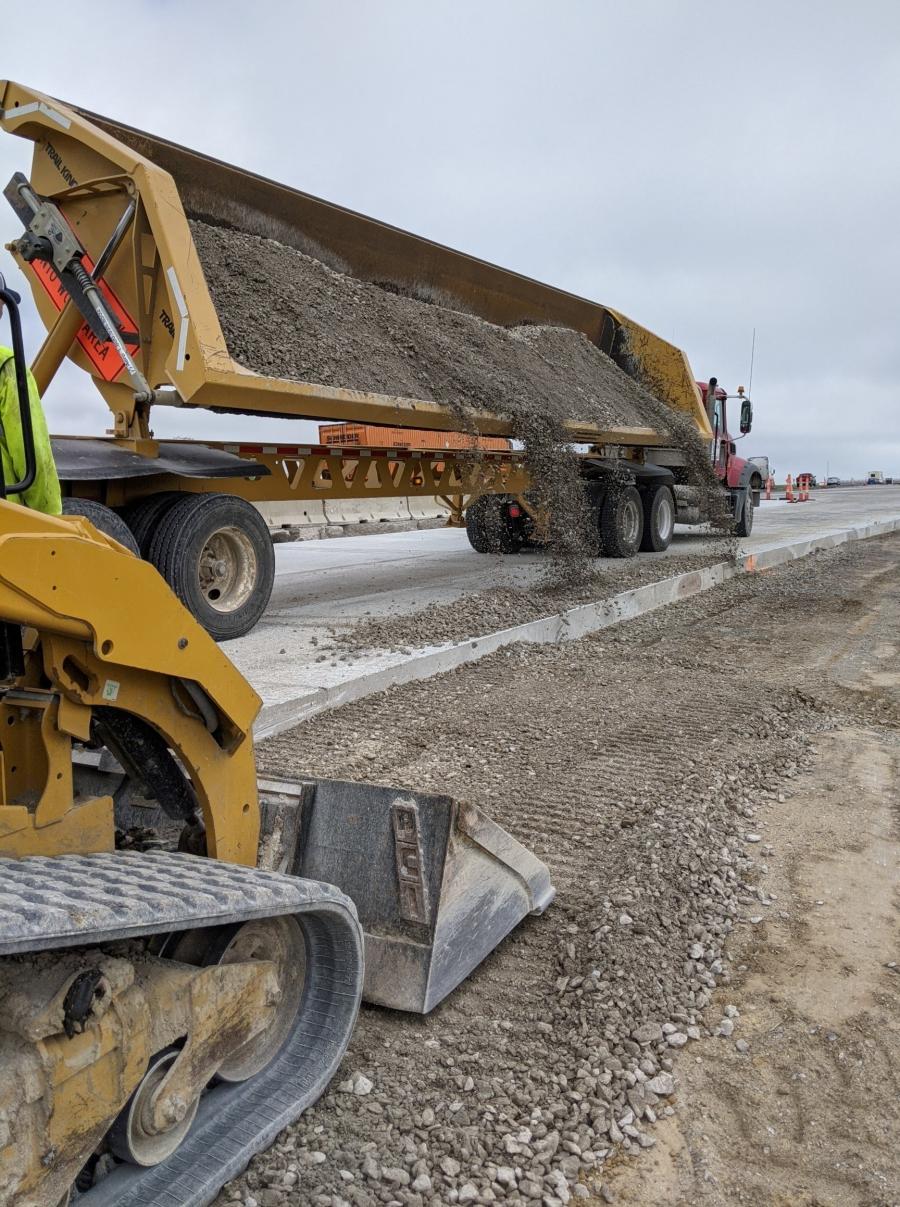 In addition to clearing and grubbing sites, Stone said that crews used excavators and side dump trucks to remove guardrail and cable before stripping and stockpiling topsoil. They then performed "extensive grading to reconfigure [the] interchange on-ramps and off-ramps," using excavators, dozers, scrapers and articulating haul trucks.

Temporary wire mesh MSE walls were included in the construction plans to allow for construction staging of the new roadway, which has a different profile (i.e., elevation) compared with the existing roadway in some areas, Cutler elaborates. "These MSE walls also allow for the maintenance of traffic between phases of construction."

So far, more than 50 piers have been constructed; most bridge piers are pile-driven, according to Cutler.

Roughly 10,000 tons of asphalt will be placed in locations throughout the project, including shoulders and detours, using rollers, pavers and milling machines.

"All asphalt on the project is being supplied and placed by subcontractor L.L. Pelling," said Stone. "Depths range from six to 16 inches, depending on application, with density anywhere from 140-160 pounds per cubic foot, depending on the location and whether it's for shoulder widening, temporary detours, etc."

One unusual aspect of this design-build project is the pier shapes and aesthetics, which were determined through a series of meetings with various agencies and the public. The style chosen features limestone texture and color treatments that will complement the concrete barrier rail design along I-80 through the Iowa City/Coralville metro area, Cutler said.

Work on the Systems Interchange Project is expected to be complete in the summer of 2024. While it's on schedule right now, there were times it was in danger of veering radically off schedule.

Crews fell behind schedule in the fall of 2019 and spring of 2020 due to extremely wet weather.

Hugh Holak, construction engineer with Iowa DOT, told the local Gazette, "This meant we were unable to get things situated where we wanted to for winter work."

Narigon confirms that 2019 was a "very, very wet year" and told the Gazette that Iowa DOT had to pull some crews from the project in order to build emergency levees to fight flooding across the state.

There also was a two-week shutdown in February due to extremely cold weather. Sub-zero temperatures are hard on the crew and the equipment, causing production rates to drop, Holak said. 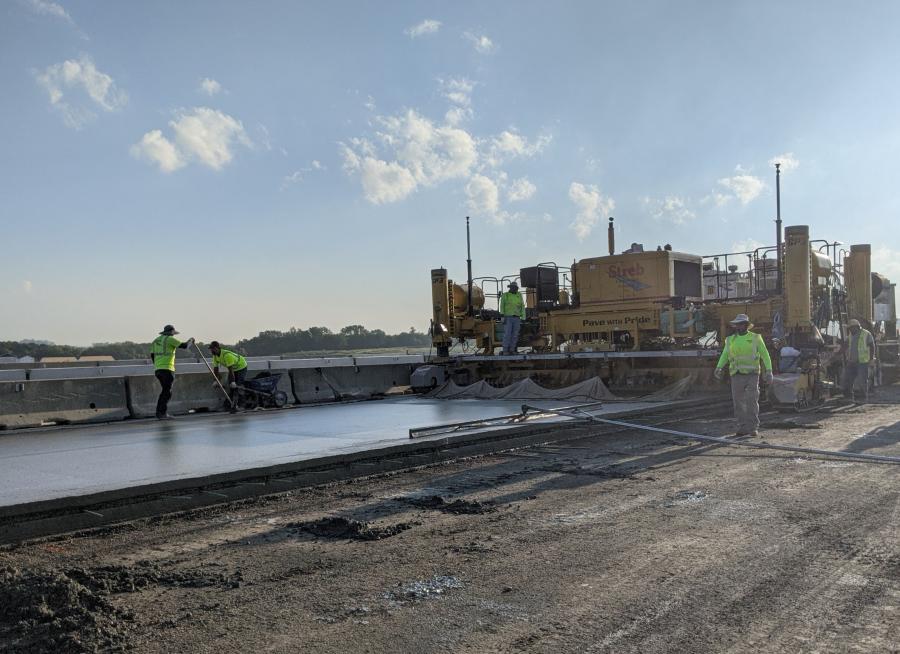 Luckily, 2020 was a dry year overall, allowing them to catch up. Another benefit to the schedule was reduced traffic due to COVID-19. With many people working from home and several school closings, commuter traffic volume was down. That allowed the Iowa DOT to implement several single-lane daytime closures — for the first time in decades — that enabled crews to get the project back on schedule.

Financing had an impact on the schedule. Financing for the project comes from federal, state and local governments, as well as a grant for the development of a 3-D deliverable BIM model as part of a research project for construction use of modeling, a first in Iowa.

But pandemic-related cashflow issues delayed letting for the current project from July to December. Other issues arose during construction that affected the budget.

Access was one challenge. To ease some of the difficulty of moving materials around on the job site, the contractor created a haul road. In addition, because there's a creek near the interchange, crews struggled to deal with dirty sand. A high-water table liquified the sandy soil, resulting in challenges for building. To combat that, they installed drainage tile to lower the water table enough to stabilize the ditch. They also used a rock key to stabilize the toe of the back slope and installed wick drains.

"We've occasionally had issues with potholes forming in the existing roadway and the temporary patches not holding," Cutler said. "Usually, they make a more permanent repair, hoping it will last until they can shift traffic onto the new pavement. If the impact to traffic of doing that is high because a full closure is necessary, they have to establish a detour route. [It] can be extensive, with mainline interstate and various ramps that connect into a certain area having to be closed and re-routed."

Iowa DOT works with the contractors to monitor, temporarily repair and schedule permanent repairs to the existing roadways to get them through the project.

Working around roadway repairs and access issues is only part of the staging drama. With 21 new bridges in different stages of construction and two others being widened, scheduling work crews has been a major task.

To assist with staging and scheduling, work on this massive project has been grouped strategically for efficiency while minimizing as much as possible the construction impacts to local businesses, residents and travelers. 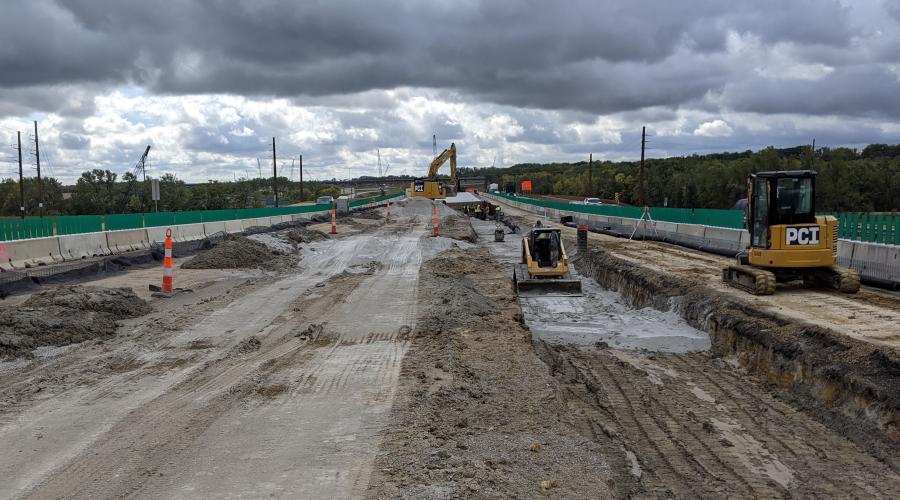 There will be single-lane closures and full closures at night, as well as overnight ramp and road closures planned through the summer of 2024. Cutler said at times there are "multiple closures occurring at the same time on the interchange at night."

Other changes include two System-to-System loop ramps that will permanently close and detour to allow for staging and construction to progress.

Having made up for lost time last year, Iowa DOT expects all new lanes will be open to traffic by the end of 2023, with additional work (such as a permanent barrier rail) on Jasper Avenue over I-80, plus project-wide erosion control and seeding, continuing into 2024.

"The project team has done a great job working together by utilizing their combined resources to complete critical portions of the project on time or ahead of schedule," Stone said. This has allowed critical traffic switches to happen when needed to keep the project moving forward."

Chad Coalbank, project manager, Cramer & Associates, said, "With lots of subcontractor coordination, scheduling, planning and hard work, we will have this project complete with traffic in its final configuration by the summer of 2024." CEG