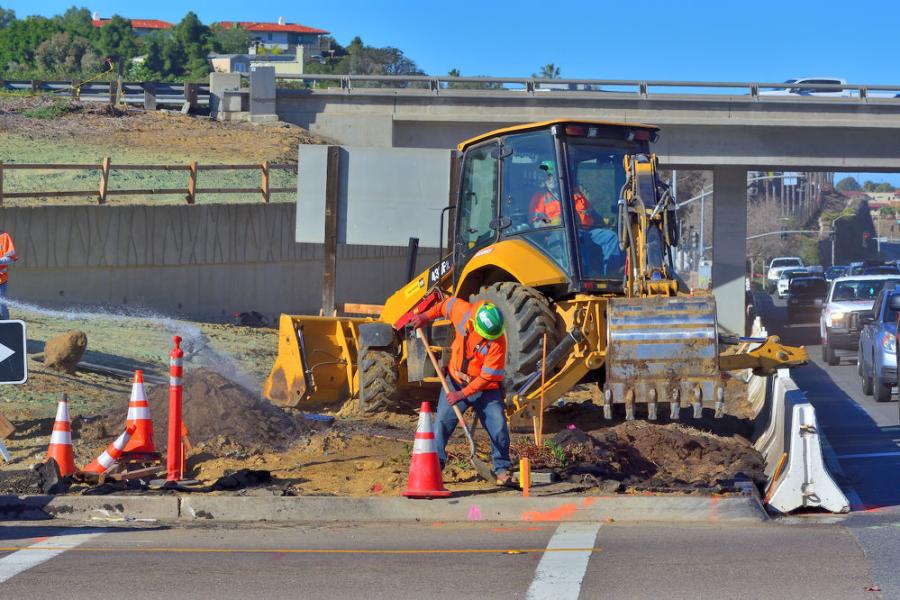 This challenging construction job – the Encinitas Community Enhancements project (ECE) – was completed by the joint-venture of Flatiron-Skanska-Stacy and Witbeck (FSSW).

The ECE dealt with active transportation improvements, which included brand-new ADA-compliant sidewalks and protected bicycle lanes at each street undercrossing where none existed previously, helping connect Encinitas communities divided by I-5 with multimodal transportation options and improving beach and coastal access.

The ECE project was constructed as part of the first phase (referred to as "Build NCC") of the Caltrans and San Diego Association of Governments (SANDAG) North Coast Corridor Program, a 40-year, $6 billion balanced set of highway, rail, environmental and bike/pedestrian mobility and coastal access projects for north coastal San Diego County. 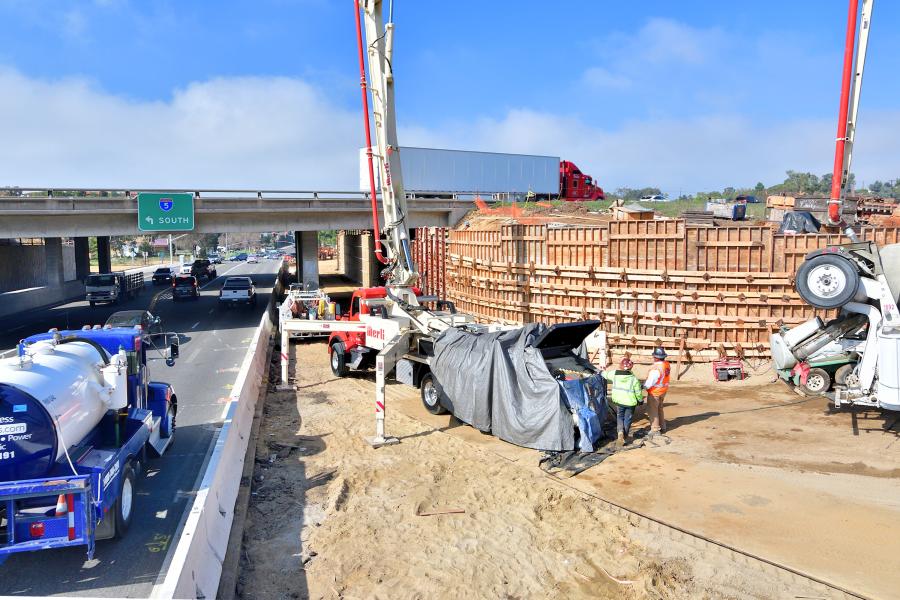 "Together as a team, the Flatiron-Skanska-Stacy and Witbeck joint-venture was able to leverage our existing subcontractor relationships and prior project experiences to help guide and successfully construct these bike and pedestrian community improvements," said Philip Bertsch, project manager of FSSW.

Numerous pieces of heavy machinery were pivotal to constructing the multimodal undercrossing improvements, including Cat D4 dozers that were used to excavate each wall and grade each slope and Cat 330 excavators that loaded dirt into trucks and excavated underground utilities. Drill rigs were used for soil nail/ground anchor installation and 12k reach lifts and 20-ton cranes were used for retaining wall form work.

Because of the confined work zone space, intermittent nighttime lane closures were used for the majority of earthwork hauling in and out of the project site. During daytime hours, intermittent flagging was used to support construction equipment access.

In total, 15,000 cu. yds. of dirt were removed, 4,650 tons of asphalt were placed and 500 cu. yds. of concrete were used for new sidewalks, curbs and gutters. Additionally, the project created 4,050 linear ft. of sidewalk and 1,580 linear ft. of retaining walls that featured 1,254 cu. yds. of concrete and 222,077 lbs. of steel. Excess material removed from the project site was brought to an on-site crusher mobilized by North American Recycling and Crushing in a nearby construction staging yard to be made into base for use on additional I-5 freeway infrastructure projects.

To create the construction zone, crews first restriped the roadway toward the north end of both Santa Fe Drive and Encinitas Boulevard to create space needed to build these improvements. Crews then set K-rail concrete barriers and installed signage to ensure the safety of passing motorists and construction crews. The team also set up pedestrian detours to provide pedestrians with safe access through each undercrossing, away from the work area.

Beginning the process, crews first demolished and removed the existing slope paving and performed a series of three separate lifts to remove soil and install ground anchors and soil nails to stabilize the slopes located at each bridge abutment. Afterwards, crews used shotcrete to reinforce the ground anchors and soil nails, helping create the skeleton of the new curved retaining wall. The exterior portion of the wall façade was then tied with rebar, formed and cast with concrete to enhance the retaining wall's aesthetic appearance with an "aloha wave" pattern. 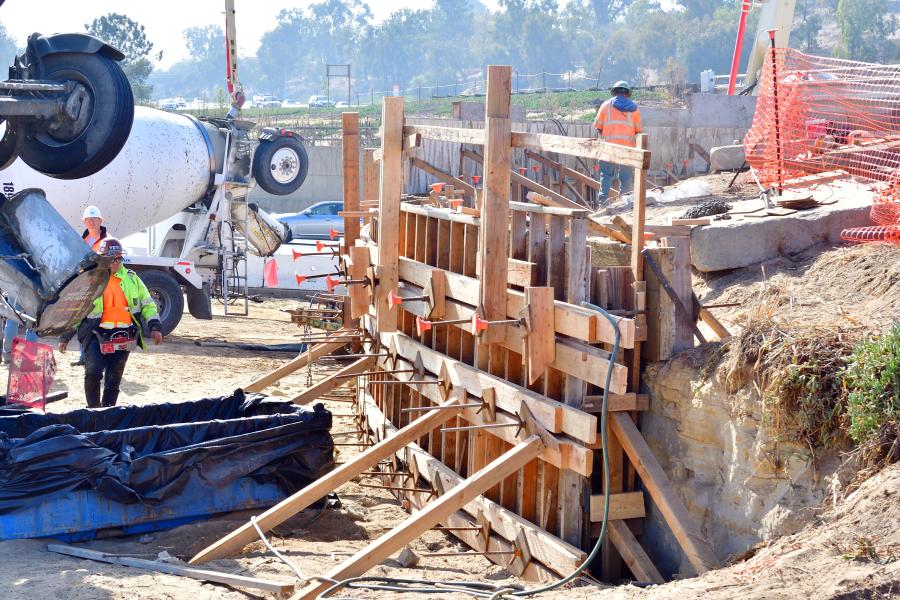 Once completed, crews used the widened space to build new ADA-compliant sidewalks and dedicated bicycle lanes that are protected by a concrete barrier connected to the bridge columns. Rock cobble blankets also were installed adjacent to new sidewalks as an added aesthetic hardscape feature and for erosion control benefits. This construction process was then replicated on the north sides of each street to complete the project.

Build NCC crews upgraded the surrounding intersections with new traffic signals to more efficiently manage traffic on the freeway on- and off-ramps and new bridge soffit lighting to help guide pedestrians, bicyclists and motorists through the undercrossings at night, as well as relocating underground utility infrastructure, improving area drainage and repaving the asphalt roadway for a new, smooth finish.

The demolition and removal of the existing slope paving was not an easy task.

Surveying was first performed to establish the face of the walls. A dozer was then used to cut a vertical face no more than 5-ft. tall to create the first lift. The resulting dirt excavation was used to create an access bench wide enough for the drill rig to sit on.. Once the excavation was complete, the drill rig would drill the holes determined by the survey, the team set ground anchors/soil nails in the holes, and then filled the voids with high strength grout.

The next step was to use shotcrete to reinforce the ground anchors and soil nails to create the skeleton of the new curved retaining wall.

First, crews hung the reinforcing steel and the drainage boards, and set a guide wire to prepare for shotcrete. Shotcrete was applied to the vertical face using the guide wire to establish the correct thickness and face of wall. After the shotcrete cured for seven-days, crews stressed the ground anchors to 48 kips. Once all testing was complete, crews proceeded with excavating the next lift. This process continued until the bottom of the wall was reached. Formliner was used inside the concrete forms to create the "aloha wave" pattern on the cast in place portion of the walls. 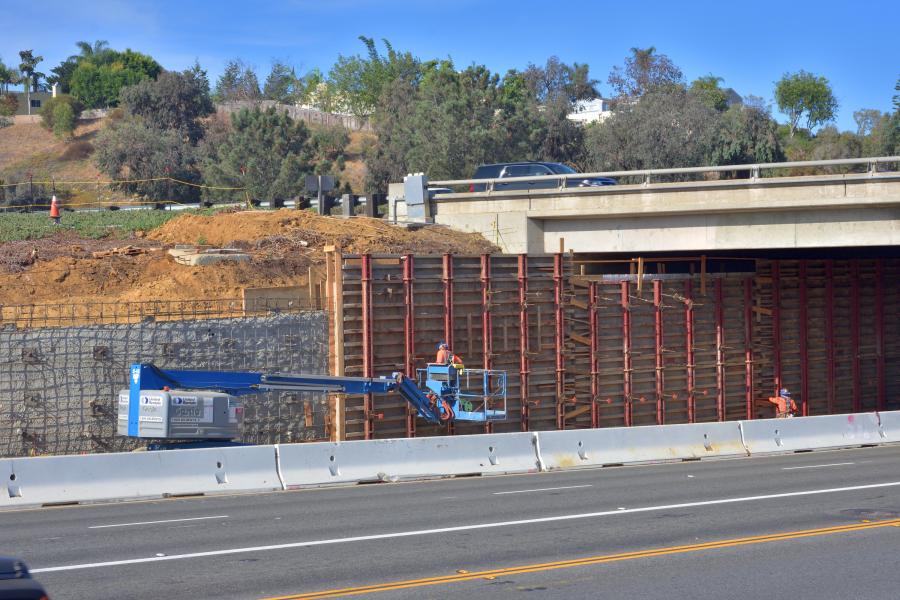 With K-rail in position, crews used temporary overnight lane closures to install new concrete barriers between the bridge columns to create the protected bike lanes. These barriers were created with gang wooden forms that had no treatment on them. After crews over-excavated and recompacted the soil below, forms were placed on one side, steel reinforcement was installed and the opposite side form was installed. Concrete was then placed in a monolithic manner, or "all in one pour," to fill the gap between the columns.

Once the south sides of the streets were completed in mid-2019, the new sidewalks and bike lanes were opened to facilitate pedestrian access as crews transitioned operations to the north sides of each street.

The first stage of the two-stage ECE project focused on constructing improvements, first along the south sides of each street undercrossing and, upon completion, transitioning to the north side of each street undercrossing. This approach ensured that bicyclist and pedestrian access would always be maintained on the opposite side of the undercrossing across from the active construction zone and limited traffic impacts to intermittent overnight travel lane closures.

"Prior to construction, Caltrans and FSSW participated in early discussions to develop a comprehensive project design and approach to the Encinitas Community Enhancements project," said Steve McMillan, senior resident engineer with Caltrans. "This process is referred to as Construction Manager General Contractor, or CMGC, and it provided our contractor the opportunity to share input and feedback on the overall constructability and timeline of the project to ensure our success."

Steve Vaus, SANDAG's chair and mayor of Poway, is pleased to see the new infrastructure open to the public.

"These much-needed improvements increase coastal access and offer great multimodal options for all to enjoy the outdoors," he said. "These newly upgraded pathways are just one example of our combined efforts to improve highway, rail, environmental and coastal access for all San Diegans."

"Bike paths and pedestrian spaces are crucial links to the state transportation system," said Gustavo Dallarda, Caltrans District 11 director. "Together, they help get people where they want to go safely. In coordination with SANDAG and our transportation partners, we will continue to aid in the development and construction of enhanced access to alternative modes of transportation." 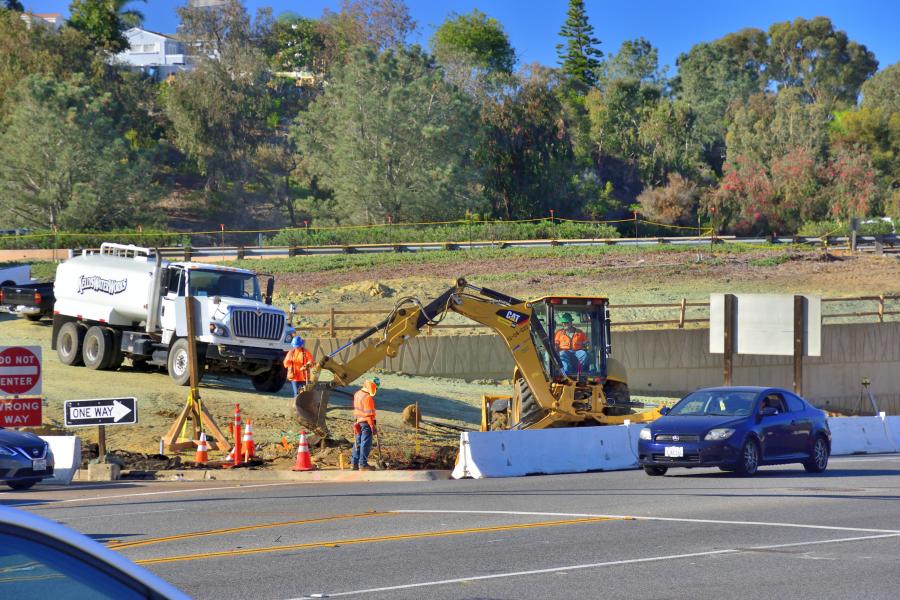 The Build NCC program began in 2017 and is anticipated to be complete in 2022. The $869 million project is funded through a combination of federal, state and local sources, including the TransNet program, a voter approved half-cent countywide sales tax that helps fund regional transportation projects. The highway portion of Build NCC is estimated to cost $663 million.

An aesthetic element also was included via a public art installation with the theme "Encinitas Up Close" that reflects the culture of the five communities of Encinitas.

Early collaboration between Caltrans, SANDAG and the city also resulted in an added project benefit – a new public canvas for community art. Retaining walls lining both sides of the Santa Fe Drive street undercrossing feature 53 mosaic art panels designed by teams of local students from San Dieguito High School Academy and community artists. These panels, commissioned by the city, each measure 3 by 5 ft. and feature artistic designs or expressions that reflect the city's vibrant coastal culture and were embedded within the new retaining walls in late August 2020.

At Encinitas Boulevard, 3-ft.-tall horizontally curved mosaics created by professional artists will be installed at all four corners of the undercrossing as part of this collaboration in early 2021.

"This project provided a great opportunity for our local artists of all ages," said Encinitas Mayor Catherine Blakespear. "The talent and teamwork exhibited in these art pieces offer a great representation of our coastal communities. We're thrilled to work with Caltrans and SANDAG to incorporate the community art and showcase all that our city has to offer."

The city has already completed the installation of 53 mosaic art panels on the north and south sides of the Santa Fe Drive undercrossing. CEG