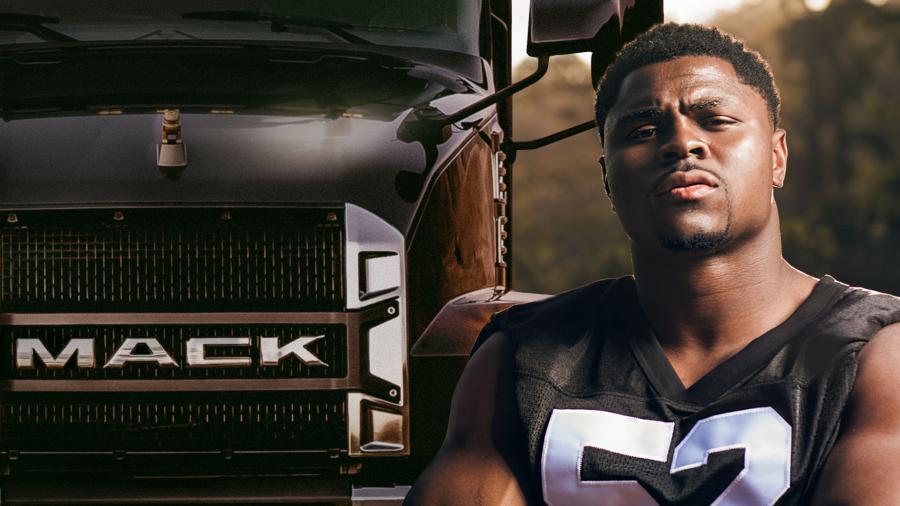 In a video recently released by Mack Trucks, Oakland Raiders defensive end Khalil Mack shares what it takes to be a Mack: hard work, determination and grit.

In a video recently released by Mack Trucks, Oakland Raiders defensive end Khalil Mack shares what it takes to be a Mack: hard work, determination and grit. These values match the values of Mack Trucks, which led the NFL star to partner with the brand.

The video, released just following the launch of the Mack Anthem model Sept. 13, features Mack, the 2016 NFL Defensive Player of the Year, as he works out, practices and takes the field. You can view the video at the bottom of this article.

“You only get out what you put in,” Mack says as the video shows the Mack Anthem taking the road. “And I'm all in. We live for times like these. We are Mack, and this is our Anthem.”

“This partnership was a natural fit,” said John Walsh, vice president of global marketing and brand management for Mack Trucks. “We share the same values. We share the same name. But most importantly, Khalil Mack stands for everything we believe in – humility, honesty and dedication.”

“What Makes a Mack” was released Sept. 15. Previously, Mack Trucks released the video “Mack Meets Mack” in July to tremendous response. To date, that video has been viewed nearly 200,000 times.

Mack attended the University at Buffalo. The fact that he was lightly recruited out of high school and given a low ranking by a well-known video game maker going into his sophomore year of college served as motivators for him to work even harder.

The results speak for themselves. In 2013, Mack was named the Mid-American Conference Defensive Player of the Year, becoming the first Buffalo football player to win the award in the school's history. He also set a number of school and NCAA records, including being tied for first in tackles for a loss and most forced fumbles.

He was selected by the Oakland Raiders with the fifth overall pick in the NFL draft in 2014, and in just his third year, was named NFL Defensive Player of the Year.

The Mack Anthem gives drivers and businesses the tools they need to command the road. With a bold grille and prominent Mack wordmark, the Anthem features an all-new exterior design with optimized aerodynamics for improved fuel efficiency. New driving and sleeping environments were crafted with an emphasis on increasing driver comfort and productivity.