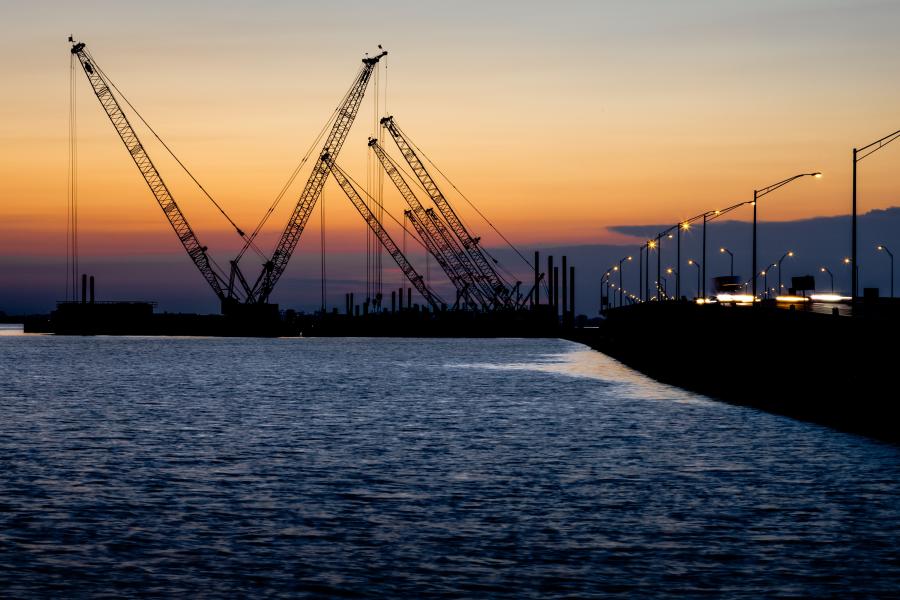 The Florida Department of Transportation (FDOT) is overseeing an $866 million design-build project that calls for a new southbound/westbound interstate bridge over Old Tampa Bay between Hillsborough and Pinellas counties. Construction began in October 2020, with an estimated completion date of 2025. 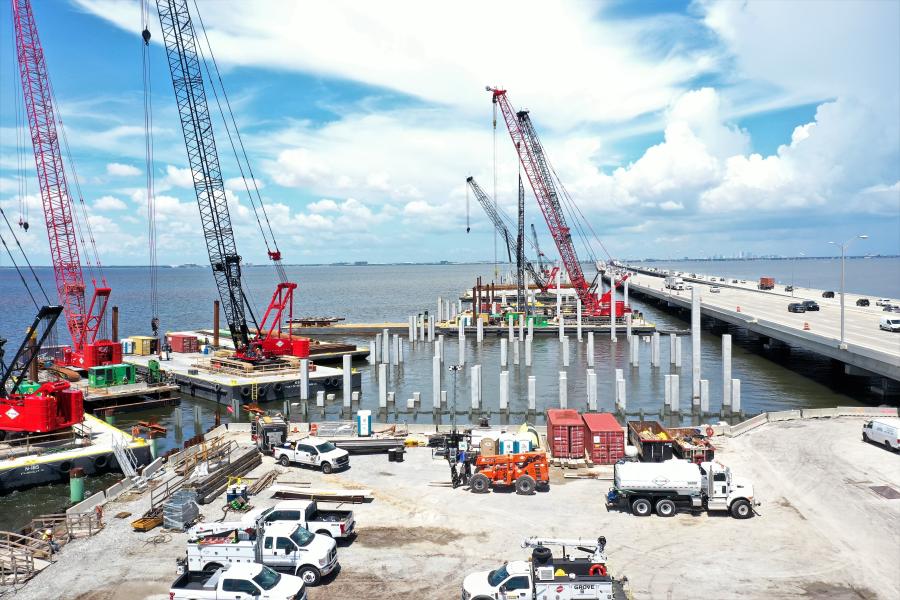 "There are two bridges that carry interstate traffic over Old Tampa Bay," said FDOT spokesperson Kris Carson. "The bridge currently carrying northbound traffic was built in 1959. It's being replaced, in part, due to the continually increasing cost to maintain it in the corrosive environment. It also does not meet current design standards."

"Building the new bridge to the north of southbound lanes created a better alignment to the causeway approaches than other alignments," said Carson. "This also provides for easier access to the bridge that will be removed, which will help to keep construction costs and duration for the removal to a minimum."

The average daily traffic is more than 170,000 vehicles. Nighttime lane closures have been used to set barrier wall and restripe the southbound bridge, shifting traffic to the left and creating a workspace for the contractor in the former southbound shoulder. Most of the work associated with the project is being done during the day, without impacting the motorists using the existing bridges.

Express lanes are optional travel lanes, located on an interstate or toll road, that drivers can choose to use when they want a more predictable travel time. They offer drivers a choice for a faster, more reliable trip, especially during peak hours, and are designed with a limited number of entrance and exit points to serve longer, more regional trips. Additional benefits include less traffic congestion, reduced fuel consumption and decreased air pollution. 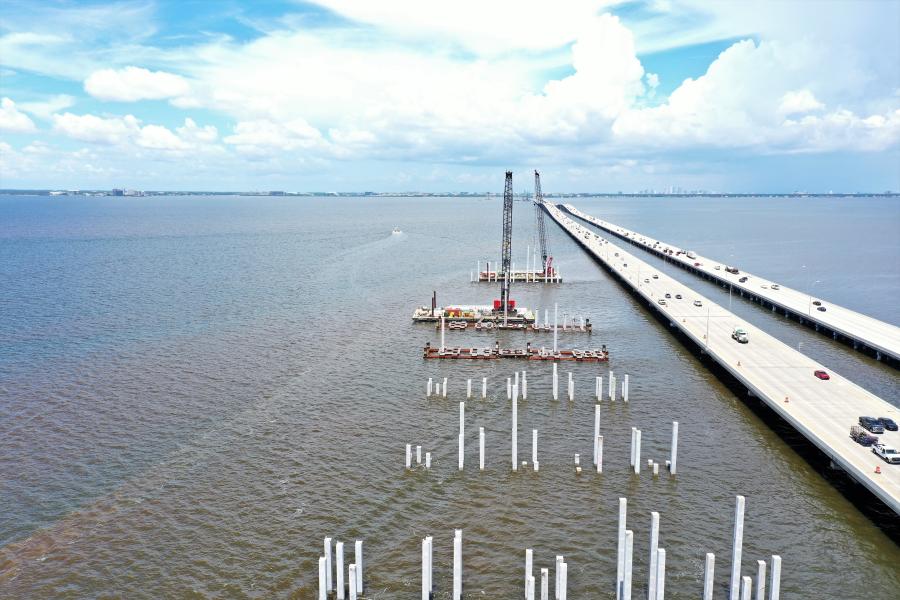 In addition to the new express lanes, the bridge also will include a multi-use trail along the north side for pedestrians, bicyclists, as well as the foundation support for future light rail. The multi-use trail is part of the bridge, not a separate structure. It will be constructed as the bridge is built.

Carson noted that safety is the main concern for crews on the job.

"Working over water always creates challenges. Florida weather adds to that. Wind and wave action can create challenging and potentially unsafe conditions for the crews working on and traveling to and from the barges. Pop up thunderstorms with lightning and waterspouts are a common occurrence that occur frequently and usually without much advance notice.

"Also, working within feet of traffic travelling over 70 mph requires everyone to always remain alert to their surroundings, while also performing their job duties."

Currently, crews are working on foundation and substructure tasks that include driving piles, pouring footings, columns and caps, bulkhead installation, clearing and grubbing, grading and drainage work for bridge approaches.

As with all over-water bridge projects, all equipment, materials and staff must be transported to the job site. On this project, that includes barges, cranes, pile driving rigs, equipment operators and inspection staff. Material is transported on barges via tugboats. Staff are transported daily to their work areas on the barges by boat.

As for key tasks that have already been completed, the design of the bridge is 90 percent complete. Foundation and substructure work is under way. Approximately 50 barges are in use. At the peak of construction, there will be just under 100 barges in the bay associated with construction of the new bridge.

Concrete and steel are among the main materials being used on the project. Heavy machinery required to complete the work includes a series of cranes, including a Manitowoc 4100 Ringer; Manitowoc MLC 300; Manitowoc 2250; Manitowoc 14000; Manitowoc 999; and Tadano Mantis GTC 1300.

Carson explained that the overall building process is slow and steady.

"Bridge projects by their nature must be done in phases, starting with foundations, then substructure then superstructure. Due to the magnitude of the project, every phase is time-consuming."

Ultimately, all traffic will be moved to the final alignment.

"The roadways leading onto the bridges will be restriped to accomplish this," said Carson. "As with all major restriping activities, this will be done at night when traffic volumes are lower." 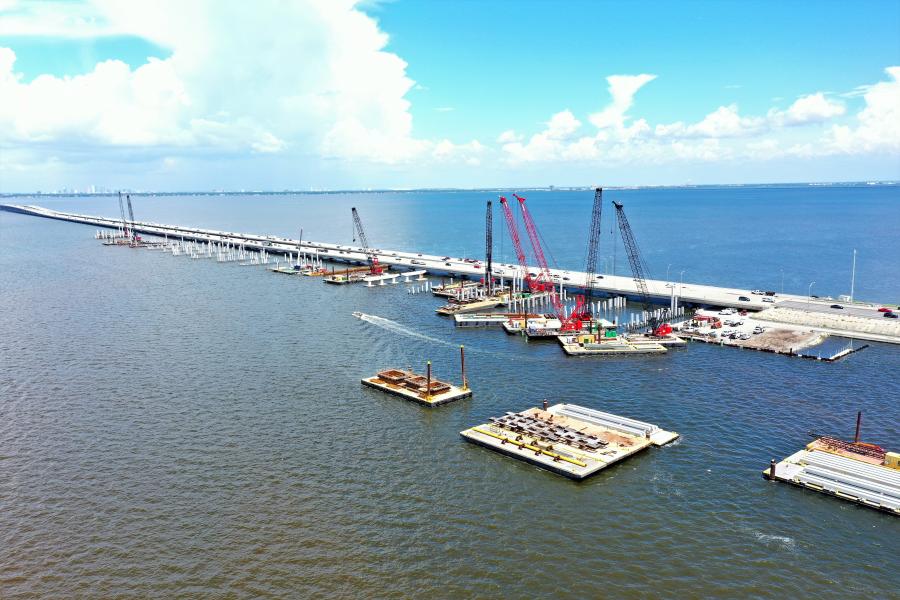 As part of the project, the existing northbound/eastbound (St. Petersburg to Tampa) bridge will eventually be removed.

"This will occur after traffic has been moved onto the new alignment and the current southbound bridge has been rehabilitated," said Carson. "This will be close to the final completion of the project. Removal of the current northbound bridge involves removing the decks, piers and pilings."

According to FDOT, the new design will improve incident management in emergency response situations and provide additional capacity along a critical evacuation route. To accommodate transit in the future, a portion of the new bridge will be designed and constructed to carry heavier loadings, up to a light rail transit system. Should light rail transit be locally supported for implementation, the existing southbound bridge would then be widened and travel lanes shifted to the widened bridge.

Carson said it's truly rewarding to see construction continuing on such a lengthy project, which is a joint venture between Archer Western and Traylor Bros.

"The team working on the project consists of seasoned professionals who are working together to create what we believe will be an area icon for future generations." CEG