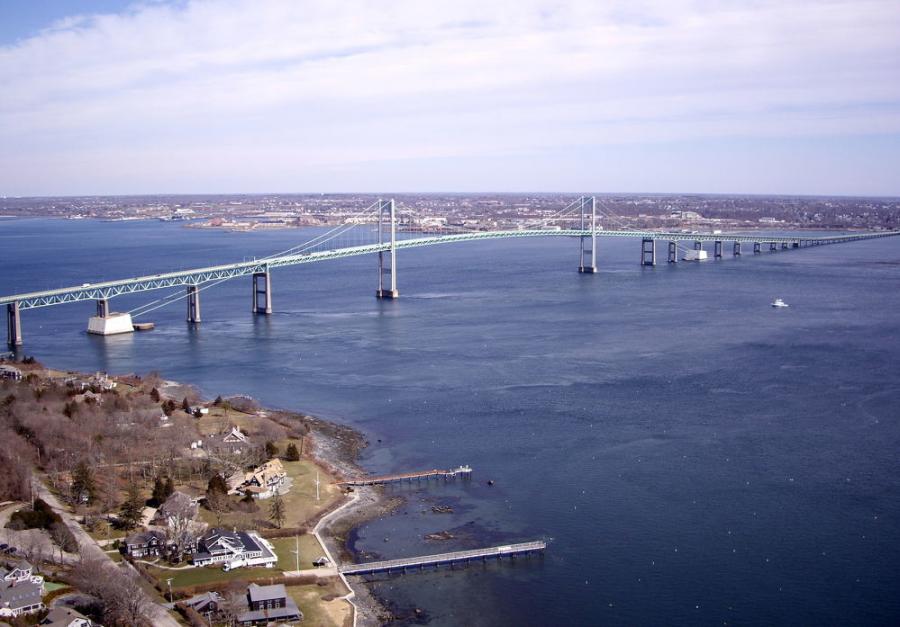 The structure, renamed in 1992 for U.S. Senator Claiborne Pell, is the lifeline to both Conanicut Island and Aquidneck Island. (RITBA photo)

In the late 1960s, college student Michael Gallogly spent two summers working as an oiler on the Newport Bridge. A half-century later, he recalls in vivid detail the men he encountered, including one Native American ironworker who stood on the barge's steel deck in front of the engine shacks.

"A bright red hard hat with ‘Bethlehem Steel' stenciled on the side and the name ‘Lee' printed across the back covered his jet-black hair and leathery brown skin. He didn't talk much. He didn't have to. His presence said it all.

"Using an electronically powered rectangular box with a series of red buttons hung around his neck, Lee signaled the engineers operating the high tower engines when to lift, lower, swing left or right the boom that hoisted the steel that eventually became the Newport Bridge. He stood on a steel platform in front of or above the operators, and looking up at the iron workers overhead, translated their hand signals into a series of bells or lights by pressing the buttons on the box around his neck." 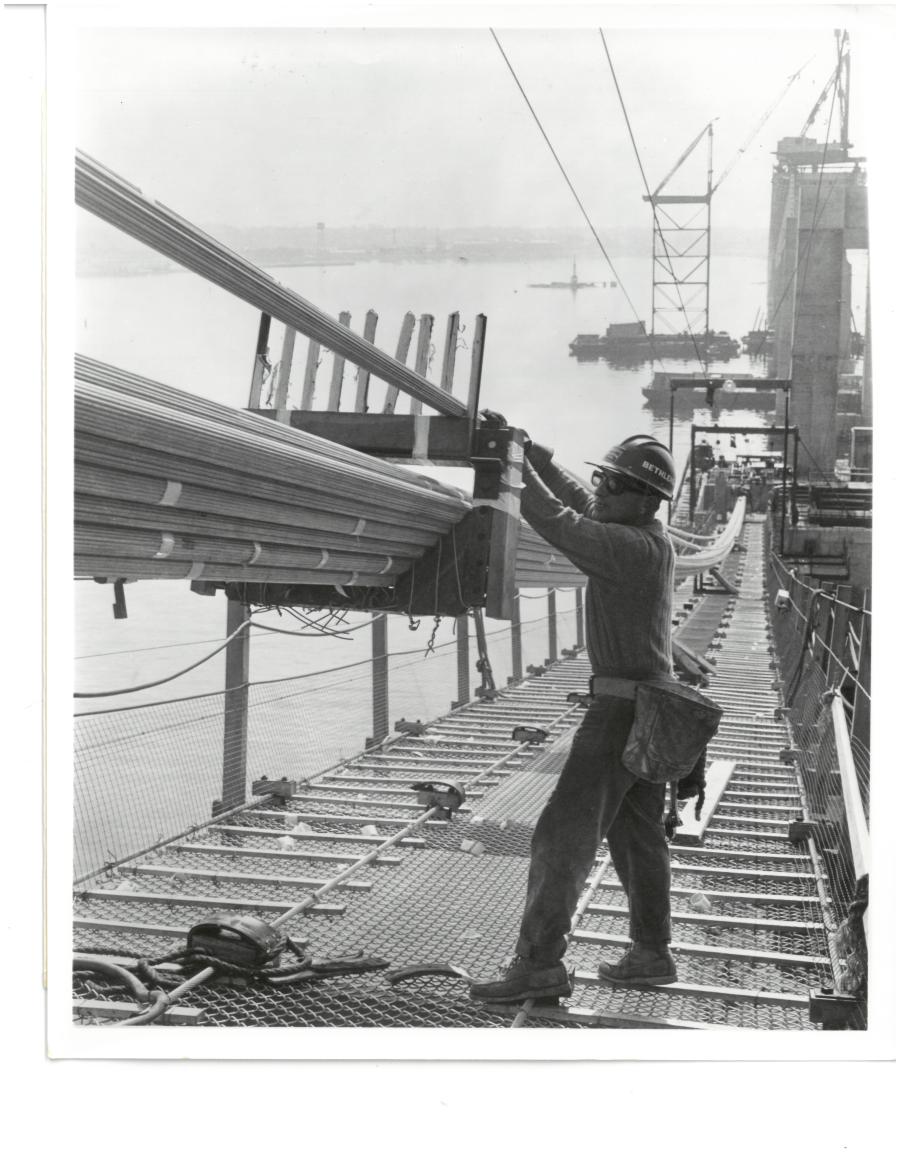 Gallogly, now living in Richmond, Va., will be among the laborers reuniting in Newport on June 28 to mark the 50th anniversary of the iconic bridge's completion.

"I would hope to see some of the other people who worked on the bridge, but, unfortunately, I suspect most have died, as I was one of the youngest workers on the job at that time."

Approximately 60 workers, or their family members, have already RSVP'd, according to anniversary committee chairman Evan Smith, president and CEO of Discover Newport.

"They all seem excited to attend and share their stories. Some are the widows or children of tradesman who have passed. Most of the living workers are now in their 70s and 80s.

"We also project about 75 percent of those who've responded to date will elect to attend the reunion on July 26 at the Rhode Island Turnpike and Bridge Authority [RITBA] administration building in Jamestown. They will be arriving from all over America, and some from Canada. We're planning a midday cookout, followed by a harbor cruise traveling under the bridge."

The June gathering will start at the Toll Plaza at 9:30 a.m., when officials plan to unveil a carved stone tablet commemorating the anniversary. 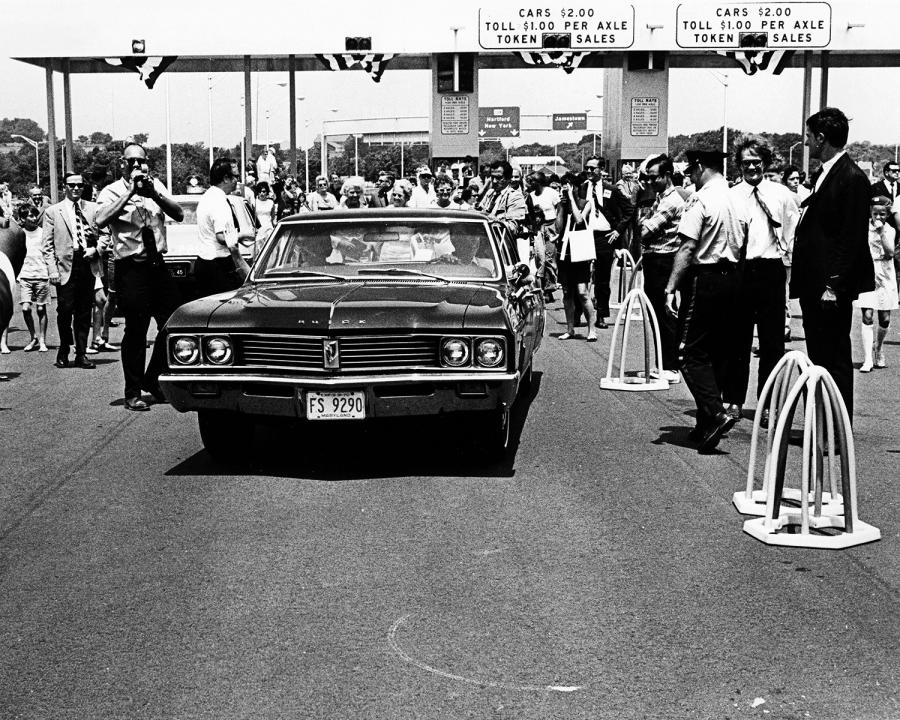 "Then we will do an official ribbon cutting reenactment of how they opened the bridge 50 years ago. At 10:30 a.m., we're doing a media event at Gurneys Resort on Goat Island in Newport. This resort location offers a great visual backdrop of the Newport Pell Bridge. Media, politicians, civic organizations and other VIPs will assemble for a ceremony that will feature about 10 invited dignitaries. We've made arrangements to have a fireboat spraying a jet of water in the air behind the speakers with the bridge in the background. We are hoping the skies will be clear for an aircraft flyover salute.

"On the night of June 28, we're organizing a free public concert and fireworks display at Fort Adams State Park overlooking the Newport Pell Bridge. At the conclusion, we plan to light up the bridge with a custom application."

Smith described the structure, renamed in 1992 for U.S. Senator Claiborne Pell, as the lifeline to both Conanicut Island and Aquidneck Island.

"Before 1969, our islands were serviced by ferries. It was a very different time and place in history. The bridge is an iconic symbol of our state. It's the gateway to Narragansett Bay and the Ocean State, and is, by far, the most photographed structure in our state.

"When the Newport Pell Bridge opened, it was hailed as the state-of-the-art construction for suspension bridges. The best in America. The bridge has survived for 50 years over salty ocean waters, due to the diligent care and maintenance provided by the management and staff at RITBA. The bridge would never had survived such harsh climatic conditions without a regular service plan. RITBA is busy keeping her in top shape, so she can continue to be the vital link to our island communities for the next 50 years." 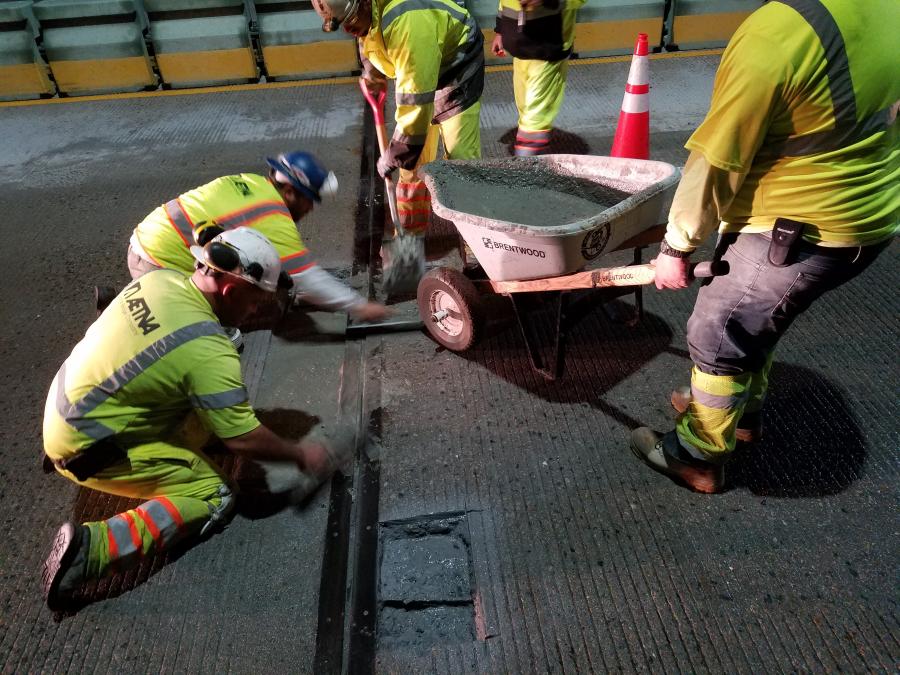 As the celebration approaches, construction crews are resuming work on the significant structural rehabilitation project on the bridge. Workers are replacing approximately 4,500 ft. of the bridge deck over the next 18 months. The work is part of the multi-year, multi-phase project, which began in the spring of 2017.

"We are busy planning the maintenance and improvements to the bridge that will enable it to last another 50 years," said Eric Offenberg, RITBA director of engineering. "One of the major projects that needs to be completed is the rehabilitation of the 50-year-old concrete deck. We are working diligently to complete this project, utilizing an innovative hydrodemolition and partial depth deck replacement strategy, while still giving drivers the ability to cross the bridge every day."

Phase I of this portion began in May, and will continue through early August. There will not be any lane closures during rush hours for this initial phase of the work. The work will be performed mostly at night, and includes installing temporary traffic management signs to help keep travel safe, installing permanent digital lane control signals on the bridge, performing expansion joint header repair on the road deck and conducting routine maintenance.

Phase II of this project will begin in early August. At that time, RITBA will resume the hydrodemolition and replacement of the bridge deck. Permanent lane closures will be required on the bridge at that time.

During rush hour travel, RITBA will deploy a new traffic pattern for this phase that is planned to lessen traffic delays. By using a movable median barrier, RITBA will have two lanes of traffic open going into Newport in the mornings.

After rush hour, they will move the median barrier to create two lanes of travel leaving Newport in the afternoon. This traffic pattern and daily change of the barrier location will best accommodate the directions of the heavy daily traffic.

The contract for this portion of the deck project was awarded to Aetna Bridge Company for $19 million dollars. After completion, RITBA will delay further work on the replacement of the bridge deck, as RITBA will then start its major renovations to the ramps and access to the bridge in Newport.

According to RITBA's website, the Newport Bridge contributed to a surge in the area's tourism industry following its opening. Although planning began in the mid-1930s, efforts to build the bridge were delayed until after World War II. 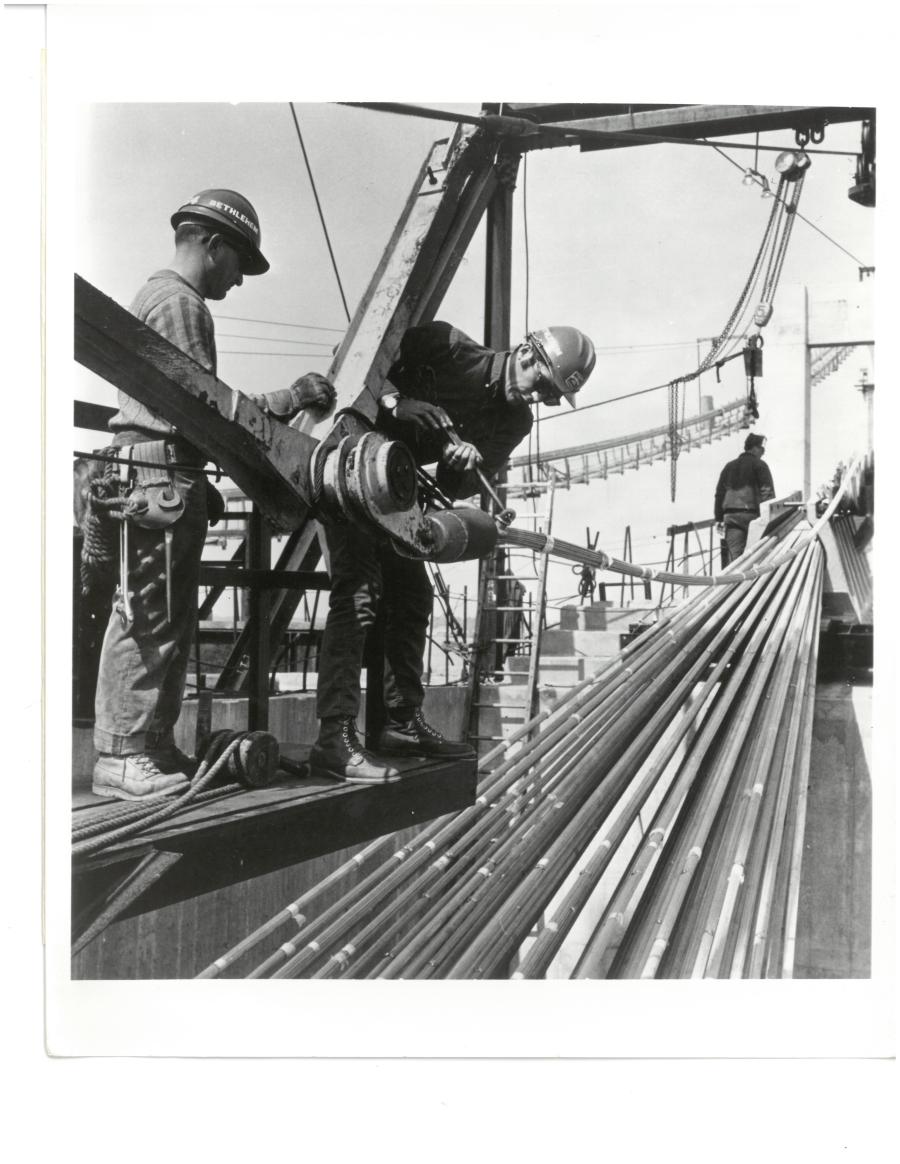 By 1948, the state had stepped up its efforts to construct a bridge over the East Passage of Narragansett Bay by establishing the Newport-Jamestown Civic Commission; however, it wasn't until April 1966 that construction of the approach piers began. with work on the tower piers and anchorages taking place one month later.

According to Jim Ricci, author of The Newport Bridge, it was the first suspension bridge that used off-site, shop-built parallel main cables.

"Since the 1850s, every major suspension bridge had used the cable spinning method that John A. Roebling patented and made famous on his Brooklyn Bridge. Other firsts included plastic cable covering to better protect the cables from rusting; long-pipe anchorage assemblies; two-part epoxy paint; shop-welded and field-bolting that reduced riveting to less than one percent; and pile driving in water more than 160 ft. deep."

While the bridge builders were setting the concrete forms on top of the piles, the largest weighing 420 tons and requiring the use of the largest hoisting vessel on the East Coast to place, two powerful storms damaged the forms and delayed construction.

"The towers are 400 feet above the water and the roadbed is 200 feet above the water," said Ricci. "All this required courage, strength, skill and teamwork. Natives Americans from the Mohawk Tribe were well-known for their high-wire steel construction prowess. They commuted from their Montreal reservations, returning Friday night and back in time for work Monday morning." 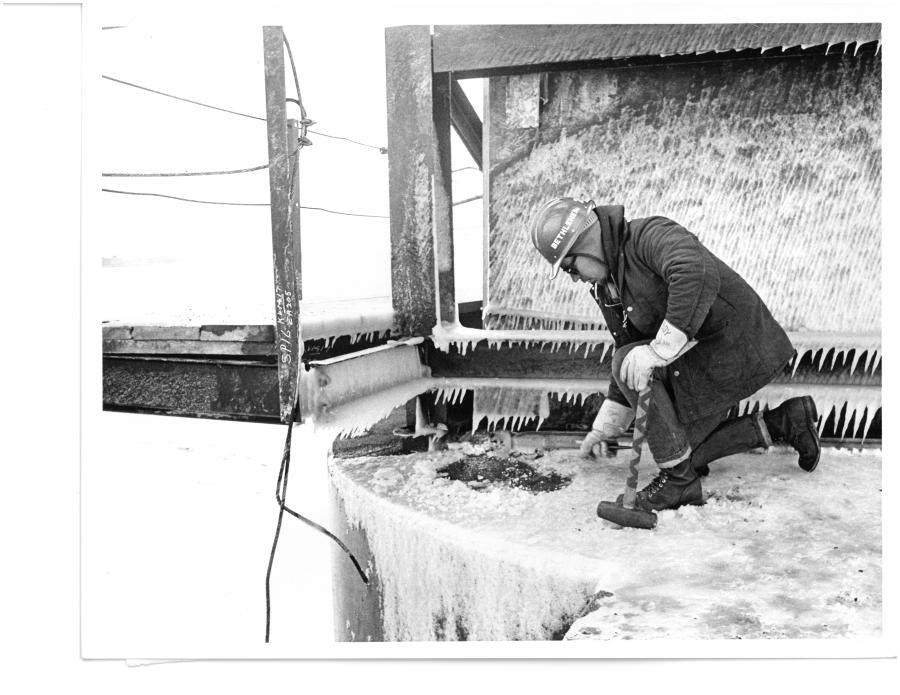 Crews often battled severe weather as work progressed. The winter of 1967-1968 was reportedly one of the harshest winters on record. Throughout construction, workers faced dangerous conditions. Some paid the ultimate price.

"My research uncovered three deaths," said Ricci. "The first was on Sept. 23, 1966, when Raymond Savard, 37, of Kenner, La., was leveling the piles for one of the main towers when his air hose got tangled. The second happened on Feb. 5, 1968. Henry Gormly, 48, of Portsmouth, R.I., died when a 1,200-pound balancing bar slipped from a crane at hit him in the head. A third worker, Edward Vicarie, 21, of Montreal, Canada, died while sandblasting tower 2W.

Jerry Candelmo, an oiler on the bridge, recalls the tragic loss of life, as well as the long hours he put in while cleaning and lubricating equipment.

"I worked for about three to four months, and then went to Vietnam. My father stepped in and took my place, because they needed bodies to work. He was a deckhand."

Candelmo added he's proud to have played a role in the construction.

"There's a real sense of pride. When you work on a bridge, it's personal, whether it's for three days or three years."

Former marine Mike Fitzgerald worked on the bridge in 1969, not long after being discharged from the USMC.

"My responsibility was painting. I also helped with inventory. I painted the inside of the tower on the Jamestown side, which was like cells or compartments on a submarine."

Fitzgerald said the toughest part of the job was trying to sand inside the cells.

"It was very dusty, and required a mask to prevent dirt and particles in your mouth and nose. Some cells were very small. I felt like I was on a ship, climbing four or five steps to each compartment. I also painted the cables that supported the bridge. They had to be painted with large white mittens because of the way they hung, sort of like milking a cow.

"On the daily walk up to the Jamestown tower of the bridge, part of the walk on the catwalk made the view of the bay beautiful. I recall the first day, going to the Jamestown side of the bridge with about eight men. When we reached the top, there were only seven. One decided to quit, and walked back to the Newport side." 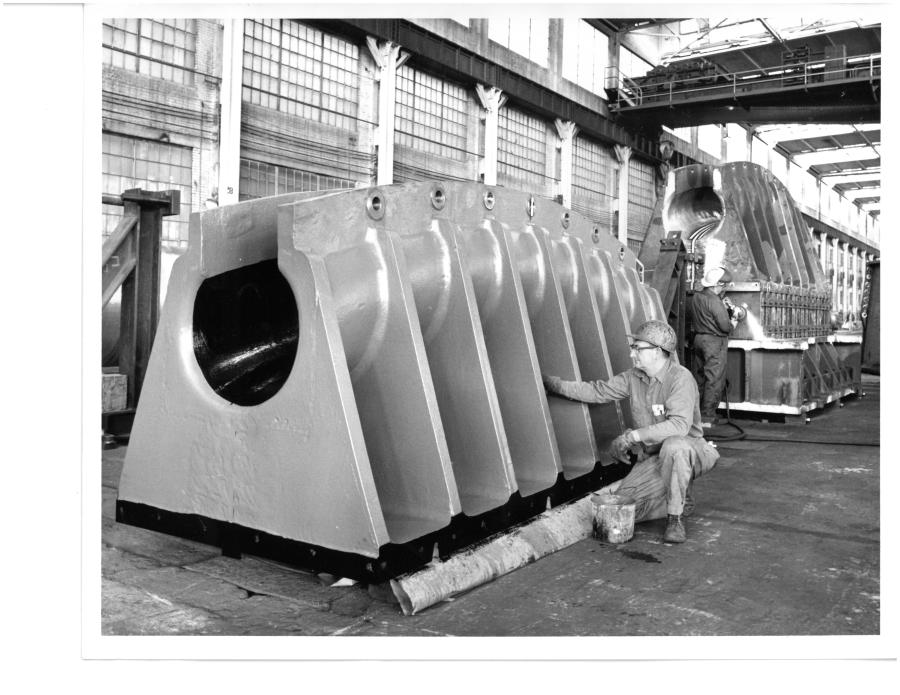 He added, "I always think of what would have happened if I stayed with the company. I also tell my grandchildren that Poppa painted the bridge."

Like Fitzgerald, Gallogly is grateful for his time on the bridge, despite witnessing one very close call.

"Little Joe was young, slight and nimble as a cat. Unfortunately, on a clear, sunny, perfect summer day on the bay, he lost his balance and fell off the steel from about the level just below the present-day bridge road. He was alert enough to toss off his hard hat and pull the strap on his safety belt, to release the two heavy steel wrenches the iron workers used to guide the steel into place and tighten down the bolts before they were powered into place permanently.

Said Gallogly, "He shook off the salt water and his co-workers concerns, and walked over to one of the wooden deck benches used during lunch breaks. He took out his wallet and fingered through its contents until he found the paper he was looking for. He carefully opened the folded paper and neatly patted it down. He straightened up, and said he wanted to be sure his paycheck hadn't gotten wet during the fall."

For Gallogly, the 50th anniversary gathering will give him and others a chance to reflect on a project that remains close to his heart.

"What comes to mind whenever I cross the Newport Bridge is how hard everyone worked at a dangerous job that required not just skill, but constant awareness of where you were, and what was going on around you. I'm reminded how fearless the ironworkers were, and how dedicated everyone was to getting the job finished."